This would be a game-changer for EVs

How could it be made to prevent current from inducting in to the wheel rims of cars with low profile tires?

The same way an induction cook top doesn’t burn your wrist if you’re wearing a wristwatch.
The coils don’t get energized unless the expected load is detected nearby.
And I agree:

The cost of this would be outrageous.

Just put your hand on your phone Qi charger, what do you feel? Nothing.

Because that would be a perpetual motion machine and that is impossible.

It takes more energy to turn the alternators than you’d get back. Fact is each of the drive motors can and are operated as generators to capture energy while braking to extend the range.

Here’s the latest I’ve got on it 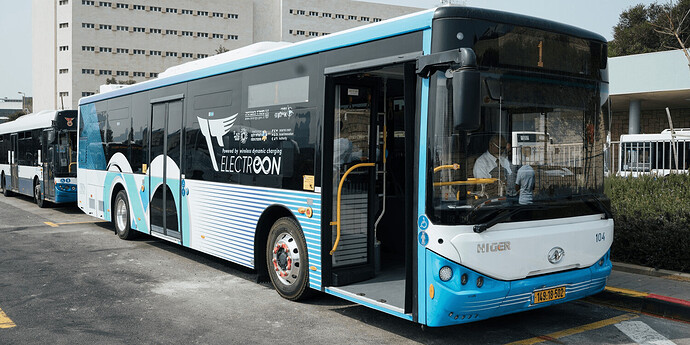 In Israel, ElectReon, a company specialising in inductive charging of electric vehicles, has signed a 5-year contract with the Dan Bus Company. The contract provides for an expansion of the wireless charging network for public electric bus lines in...

or lost an aluminum ladder!

One of the reasons conductive-core skillets have gotten so popular is that people buy induction stoves, then discover their old cheap aluminum pans won’t heat up on them.

In other words, that ladder could sit there all day and it wouldn’t gain a degree. The full phrase is “electromagnetic inductive charging.” The metal needs to be magnetic in order to heat up. Aluminum isn’t.

Well, I’m not saying that inductive charging on roads is necessarily a practical solution, but I will point out that anything that can conduct electricity can also heat up. In other words, just heat the coils a little and you have automatic snow removal. You’d probably even save money doing that, because you wouldn’t have to pay to plow the road. Which, btw, would also help reduce potholes, as would keeping the road surface above freezing.

I agree that IF we could figure out how to install electrified roadways it would be a game-changer for EVs. The biggest change is that we would no longer need “EVs” as in battery-electric vehicles. All we would need would be low-cost plug-in hybrids. With Wireless Charging Roads We Won’t Need Battery-Electric Vehicles | Torque News

I thought W-W posted this in jest in as much as EV use regenerative braking, their motors become chargers.

But I have been asked similar questions by some pretty smart people that did not have the science background.

All we would need would be low-cost plug-in hybrids.

Except that assumes that hybrids aren’t the bridge they should be. Hybrids need to be treated as the thing we use to consume less gasoline while waiting for EVs to become as practical as an ICE car. The goal needs to be to eliminate the ICE, not keep producing it because we electrified the roads.

What I wonder about is if they can come out with practical, cost-effective inductive roads before they come out with a charging scheme that makes “fuel” stops take no longer than they do today, at which point there isn’t much need for the roads. I suspect probably not.

But governments are hog-wild to spend other peoples money on projects like these and grant-hungry tech companies are drooling at the prospect.

Governments do spend money on research projects. Sometimes it works, sometimes it doesn’t. The good news here is that France spent the money, not us.

This is a waste of money, IMHO.

I agree. There are other cheaper ways that don’t have to be paid by taxpayers.

unfortunately, it was an honest question. I said it might be a dumb question, which it turned out to be. LOL like I said I don’t have much knowledge on EV’s. just what I am learning here. thanks for the answer though.

No dumb questions, that’s a great way to learn. We can respond with dumb answers, though.

I view energy as a substance (in its own special way).
It can’t be made to appear or disappear, like things that get a full phaser blast on “Star Trek”.
Our clever arrangements of wires, magnets and chemicals can only move it from one disguise to another.

Putting actual powered rails down in the pavement, like trolley tracks, that provide electricity could actually work. They couldn’t be turned on if it’s raining. Segments would have to be switched on when a compatible vehicle is on it and switched off when it leaves.

I believe cheap aluminum pans don’t work well on induction stoves because the metal is thin and isn’t as conductive as copper. A thick bottomed pan is more conductive having more metal in it and will therefore induct more current and produce more heat.

Putting actual powered rails down in the pavement, like trolley tracks

so, how would you change lanes? how would you go from the left lane on a highway to the right to get off? how would you move out of a lane to avoid an accident? if that was a good idea don’t you think they would already be talking about doing it?

There would have to be a contraption that hangs down and contacts the rails. The car would drive like a normal car. The things that would go down and contact the rails would allow the car to swerve somewhat, but at a certain point they would release from the rails. Imagine some pieces of metal that come down from the middle of the car and drag behind to the end a bit. Those would fit in the groove of the power supply track and take electricity from it. When pulled to the side too much they would pop up out of the groove and briefly drag on their own little wheels until a motorized mechanism lifted them up. The driver could command them to drop again when over another set of powered rails. Another way is that a single rail in a groove in the middle could act as a guide, and flat metal strips would be on each side to provide electricity. A mechanism would hang down from the car to contact it.

Putting actual powered rails down in the pavement, like trolley tracks,

Streetcars,not trolleys are powered by overhead electric wires. Trolleys does not mean tracks, streetcar does, a common misconception. A third rail, also known as a live rail, electric rail or conductor rail, is a method of providing electric power to a railway locomotive or train ,

Me thinks the Snowman is off his meds or took too many of them .

Me thinks the Snowman is off his meds or took too many of them .

Have to agree on that one.