Thinking about buying a BMW i8 as a daily driver

I’m considering buying a BMW i8 to use as a daily driver because of how unique it is, especially with the butterfly doors since I don’t see that often in the wild and it seems to get great mileage as well. Also considering a Lotus Evora as well since I like how it looks and it’s within the same price range as the i8 for used at least.

For my use case, storage is negligible since I’ll have some other cars if I really need to transport anything large and/or carry more than 2 people. Also don’t really care much about performance either since I’ll be using it to get around to places like work, gym, etc. The one I’m looking at right now is a 2015 BMW i8 with 50k miles going for $70k.

My biggest concern when considering the i8 is reliability. I’ve heard that BMW in general isn’t as good with reliability and it makes me hesitant to get the i8 as a daily driver but at the same time after everything I’ve looked at I keep coming back to the i8 because of how unique it is. Is it true that there are electrical problems that happen with used i8’s and that the door could potentially not open because of it? And is there anything else I should pay close attention to when considering the i8?

Am I the only person here who thinks that spending $70k on a 7-year old, out-of-warranty car makes about as much sense as gambling that money away at a casino? Personally, if I wanted a car that’s “unique” and sporty, I’d get a used Toyota Celica, Honda Prelude, Chevrolet Beretta, or 2-door Dodge Shadow. These cars are all somewhat rare nowadays, but they are not too difficult or expensive to maintain, and they are reasonably attractive and fuel efficient as well.

No. I told my son to get rid of his when the warranty was up. After the stall and $2000 repair to the fuel injection, he traded for another one with a warranty.

If you have an additional $70k laying around for repairs and a second car to drive when the i8 is in the shop, sure, go for it.

I would urge you to buy two of them, so you always have one to drive while the other one is in the shop.

Hi @TheRiddler
What’s not clear from your post is are you more worried about:

No one can predict how reliable this i8 will be. They’re not known for their reliability.

As Mustang noted, if you have the money, and you have other means of transportation when the i8 is getting repaired, then buy it and enjoy it.

if I wanted a car that’s “unique” and sporty, I’d get a used Toyota Celica, Honda Prelude, Chevrolet Beretta, or 2-door Dodge Shadow.

I can’t remember if I have ever seen any of those at a car show . I doubt if someone looking at a BMW i8 would even want to look at vehicles like those.

My neighbor uses a Corvette Z06 for his daily driver so why not the i8 ?

it seems to get great mileage as well.

My recollection is that the i8 is a battery-powered sports car.
How long is your daily drive?
Do you have a garage with a 240 volt outlet for recharging?

It’s a plug-in hybrid, so there’s not as much need for a 240v outlet. It has about a 15 mile battery-only range.

My daily drive is going to be less than 10 miles on average, maybe 40-50 miles occasionally. Not sure about the voltage in my garage.

That’s good, because its range on battery power is somewhere between 18-22 miles.

… in which case you won’t get much use of its battery power, and will be relying mostly on the IC engine. 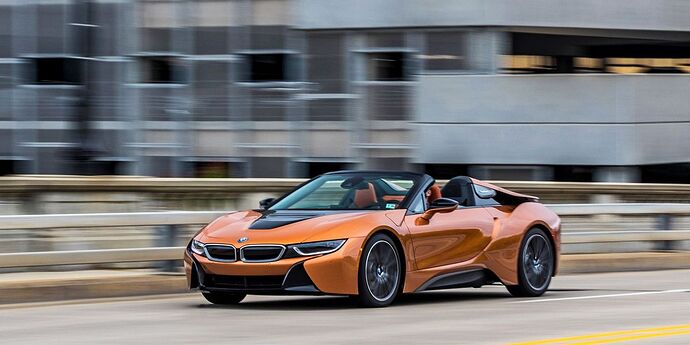 If you are lucky enough to see a BMW i8 rolling down the street, you'll immediately take notice.

More worried about the second part, it would suck if it’s always needing repairs and isn’t usable for daily driving.

it would suck if it’s always needing repairs

Unfortunately, the well-earned reputation for BMWs is that they need to be repaired more often than a lot of cheaper cars, and repairing a BMW is expensive.

This is one of the European marques that can be very enjoyable to drive while they are covered by the factory warranty.
It’s the second and third owners who wind-up footing the bill for frequent, pricey repairs.

The 2019 has a slightly bigger battery than the one the OP is considering, and has a longer battery range because of that. $70,000 is a common price for used ones of that age. As for reliability, who knows, it could be relatively reliable. It’s such a low-production model there’s not a good track record. Go to some of the BMW forums, see what owners have to say.

edit - I see you have, good:
BMW i8 General Discussion - BMW i Forums (bimmerpost.com)

The Evora should be reliable since it uses a 3.5L Toyota V6. The manual or automatic Aisin transmission should be reliable too. Since it’s light, it gets good gas mileage too. The auto gets better gas mileage, and the EPA gas mileage is the same whether it has the supercharger or not. The normally aspirated 6 should have plenty of power since the car weighs about 3180 pounds.

The Evora should be reliable since it uses a 3.5L Toyota V6

That is true, but I would suggest that the OP should first determine if his local mechanics are willing to work on a Lotus. If those small, low-slung cars need to have body panels removed for routine maintenance–as is typical for some other European sports cars–some mechanics might not be interested in working on them. And, even if they are interested, removing body panels for routine maintenance will add a lot to the labor cost for that maintenance.

I’d worry more about everything besides the engine in the Evora. Kind of like an old Jaguar, it’s not usually the engine causing problems.

I’ve had the pleasure of testing the i8 twice, each time for a week, and I also took it on a long road trip in New England as part of a media event. It remains one of my all-time favorite cars for enjoyment. Its looks will never get old IMHO. However, as a daily? Not so sure. The ingress and egress was such a hassle I’d have to say no. This may seem crazy, but if I was going to do a fun car for a daily, I’d pick a (new) fully-loaded Miata RF instead. 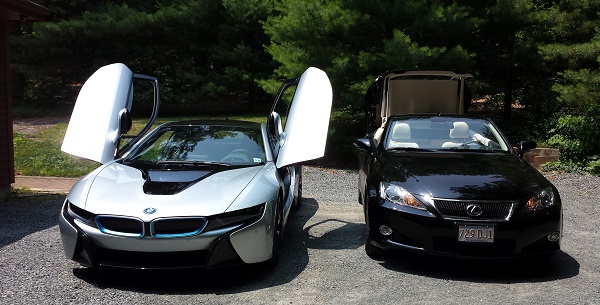 Yeah that’s something I’ve heard is a pain with the i8. Will check one out for myself and see if I’d be comfortable with getting in & out of it.

Will check one out for myself and see if I’d be comfortable with getting in & out of it.

Seems like that would have been done first before asking strangers on the web if you should buy it .