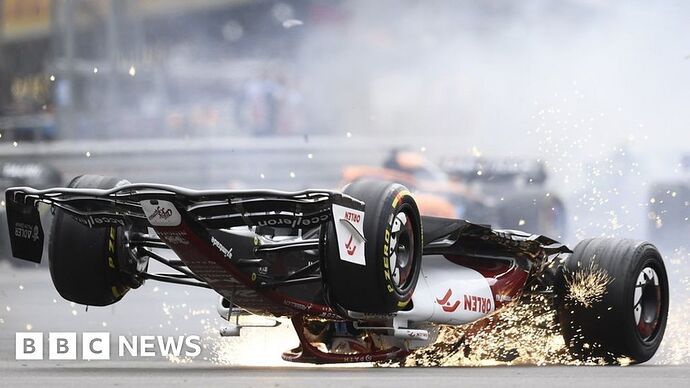 F1 British Grand Prix: What is halo and how does it save lives?

Driver Zhou Guanyu says the halo device saved his life after a horror crash at Silverstone on Sunday.

I watched this crash on the live broadcast. Scary as heck. TV would not show a replay until it was determined Zhou was OK… THEN we got to see how bad it was. Slid inverted and hopped the crash barriers being caught by the fence and falling between the fence and barriers. The Halo was credited with saving Roman Grosjean’s (Haas F1 driver, now Andretti Autosport IndyCar driver) life as well

It’s a miracle that any of those guys are able to walk away from some of those crashes.

In sadder news, for any of you that have seen the jet powered Shockwave truck, the driver of that truck (Chris Darnell) was killed over the weekend when the truck exploded. Due to the speed and mass the chance of surviving that is between non-existent and none. Cause believed to be a blown tire. He popped the chute so he may have felt it at the end.

I don’t know much about titanium but do know something about chain saws and it wouldn’t hardly scratch the paint. I do worry about fire though.

what is the other fire/explosion in that video? Any idea?

Pyrotechnics which are part of the act and had nothing to do with the truck crash. Pyrotechnics are pretty common at air shows to simulate (sort of) bombing runs and so on.

Pyrotechnics that were part of the show.