The bad news is that it’s essentially a re-badged Alfa Romeo, and will be built in Alfa’s assembly plant in Naples. 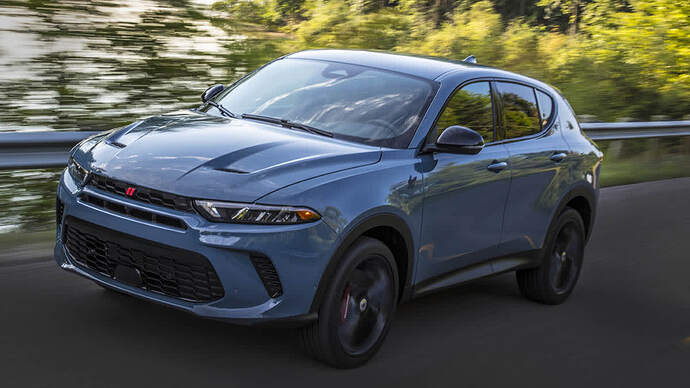 The 2023 Dodge Hornet aims to be the sportiest SUV under $30,000, with a regular turbo engine and a plug-in hybrid powertrain. It is cousin to the Alfa Romeo Tonale. Consumer Reports has the details.

Next will be a new Gremlin!

Is that the good news or the bad news?

I was going to say Pacer but…

Seriously, in spite of the bashing the Gremlin and Pacer have gotten (looks a different issue) they were not that bad as cars. A local had a Pacer and used it for her antique business on a daily basis. She drove the beejeezus out of that thing and loved it because of functionality. She had bought it cheap used and flogged it for a dozen years in commercial use.

An old girlfriend back in the day had a Gremlin GT (V-8, 4 speed Sunshine Yellow with black racing stripes) and she let me drive it a few times. It was pretty snappy but at the time was embarassing to be seen in so my drives were at night.
She had that car for 5 years with no serious issues before deciding to move on to something else. Maybe it was delayed reaction shame catching up…

My mother had a yellow Pacer with the imitation wood grain shoot stain appliqué on the sides. A Pacer wagon, of course. She liked it and when Mom passed my sister took it (please take it!). Worked well for my sister for several more years.

As for the Hornet, it looks terrific. I hope it runs well too, but I’m skeptical of that for an Alfa Romeo. Buy one and let me know how it turns out!

I think they are all running out of names. Maybe just trying to avoid the trade mark expense. At any rate we used to call that a station wagon.

Most vehicles are hard to tell apart anymore so that does not bother me. I am not the target for this Hornet but if I was I would pass . I just do not have much faith in this latest union of Dodge / Chrysler / Ram to even be a company much longer . They also seem to drop models to soon for people who tend to keep vehicles a while.

Walter Chrysler likely has rolled over in his grave

I think there were some grandiose promises when Chrysler rolled out the 200 and the last Dart also. Both dead and gone already.

To me anyway, car design is just like food product design. There used to be a few variants of potato chips, beer, and soda pop. Now there’s a dozen flavors of chips, countless tweaks of beer, and a boatload of Mountain Dew flavors including an alcoholic Mountain Dew.
Most will likely disappear so they’re just throwing mud at the wall and hope something sticks.

There is more than hope involved. The key to sales in a grocery is shelf space. The more flavors you have, the more shelf space you will get. You will quickly replace the flavors that don’t sell. Competition dwindles, prices rise.

The more flavors you have, the more shelf space you will get.

… and the big sellers get prime shelf space–at eye level. The cheaper brands and the store’s own generic brand are usually placed above eye level or below eye level.