Will a set of golf clubs fit in the trunk?

The new Ford GT is getting quite a bit of attention (of course, at $453k it’s a BIT more expensive):

The new Ford GT is getting quite a bit of attention (of course, at $453k it’s a BIT more expensive):

Yup!
One could buy 2 brandy-new NXS vehicles for the price of one new Ford GT, and still have a LOT of money left over. I am not contemplating the purchase of either vehicle, but…

Nice, but I’d still prefer a Mazda Miata. If I could get into one, that is. A Miata can be enjoyed driving daily on regular roads in regular traffic.
I’ve found that the only sports car I can still get into is the Nissan 370Z.

My body has rebelled to the point that my choice of possible sports cars is now limited to one.

I’m sure it’s a nice car and worth the money, but still I wonder if they should have used a new name instead of calling it an Acura. Nothing against them, I’ve had three, but the interior looks nearly the same as our RDX for one third the cost. I just wonder what the market is at that price and if people would rather buy a Corvette or something more exotic. I just wonder how many people know the NSX isn’t just another spiced up Acura.

I suspect the market segment they’re targeting is far more familiar with what the NSX is than the average driver. The original NSX changed the market in many ways by putting the supercar manufacturers on notice that they couldn’t get away with selling unreliable junk at insane prices just because they had a prancing horse or a raging bull as a logo. It also demonstrated that hyper performance and reliability were not mutually exclusive. People put up with an awful lot from prancing horses and raging bulls under the assumption that hyper performance and reliability could not be both built into the same car.

For the record, I do realize that some buyers of hypercars still put up with an awful lot to get hypercars. I saw a brand new Alpha Romeo 4C pull into a parking space near me recently, and as gorgeous as it was I’d want something more drivable. The front splitter was very, very close to the pavement, and visibility didn’t look to be too great. I didn’t see a whole lot of room for luggage either. Beautiful car, though.

I’m looking forward to the decontented version of the NSX, with no hybrid mechanism and just RWD. One article I read said they had to rework the NSX design several times to get an actual performance benefit out of the added hybrid motors/batteries/etc.

The original NSX was a relatively inexpensive supercar. It ran with cars that cost twice as much - and more - than it did.

The modern NSX runs with cars that cost the same as it does, and maybe a little less. So at the end of the day, the brand-conscious status-climbing newly-rich guy is probably going to buy a Porsche, because it costs the same and says Porsche on it.

They’re doing the same with the TLX. Great car, but at 50 grand I have a lot of options that have more esteemed nameplates than Acura. Price it $10k lower and you’ve got yourself the luxury bargain that Acura used to represent.

The NSX is also the first super car designed by a woman. 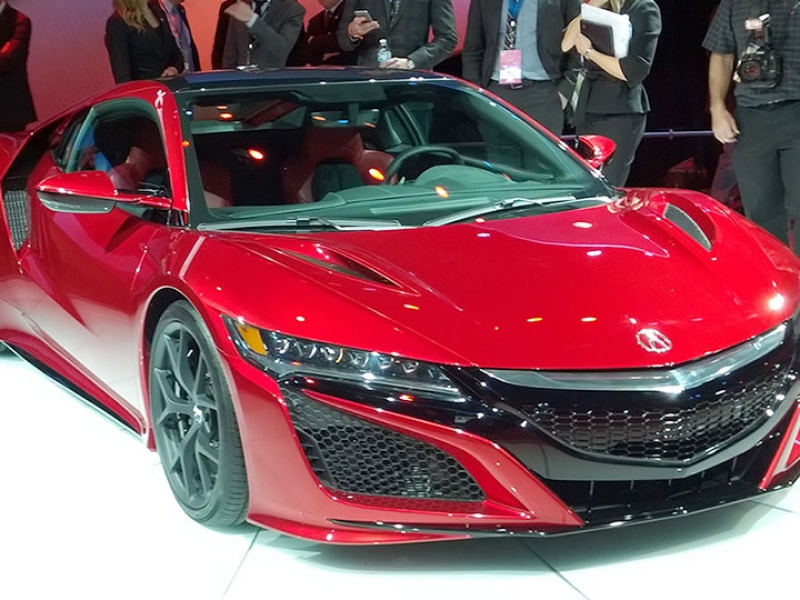 The woman behind the bold NSX

Michelle Christensen, exterior design project leader for the NSX, is the first woman to lead a design team working on a supercar.

Any of these super cars are way out of my league.

When I retire and all kids are out of college then I might be able to afford a Vette. And rumor has it the next generation Vette may be a mid-engine car.

IMO, the successor to the original NSX is the Lotus Evora. By today’s standard, it was a basic sports car with a simple, naturally aspirated engine, a proper manual transmission, manual steering, and a carefully tuned chassis. The only electronic aide were abs and traction control. You have to drive that car to go fast.

The new NSX is more of a track car than a sports cars. With 9 speeds automatic, torque vectoring 4 wheel drive, and all the electronics that I don’t care for, it has become a car that’s intended to win races. But I prefer the driver involvement of the Lotus

Good points shadow.
The new NSX, like the new Mini and the new VW Beetle, has not stayed true to what made the original great. Al three were great because they served their purpose perfectly at a price people could afford. The original Mini was a dirt-cheap mode of basic transport for a war-torn Europe. The original Beetle was a “people’s car” that everyone could own. The original NSX was a supercar with an everyman price. All three, when reintroduced in new versions, lost that price attribute. The Mini was expensive, the Beetle no less expensive than comparable cars of other brands, and the new NSX it seems has a price only the rich can afford.

I have to acknowledge, however, that the new Mini made money, the new Beetle made money, and the new NSX probably will too.

In fairness I’m not sure the NSX can stay true to its roots. Back in the 90’s, Honda was really, really good at engine design, and so it wasn’t a huge stretch for them to make a mass-production engine that could hang with the temperamental but incredibly powerful beasts found in supercars.

But that was back when 0-60 in 5 seconds was very impressive, and even the insane supercars like the Lamborghini Diablo didn’t turn in numbers lower than the low-to-mid 4’s. So a car that cost less than half of what a Diablo cost, but was well within 1 second of the car in acceleration, was a pretty amazing beast.

No matter how good you are at building an engine, we’re in an era of severely diminishing returns. There are no more low hanging fruits of engine design which will allow the mid-tier exotics to hang with the upper echelon anymore, which means Honda isn’t going to be able to produce an NSX that looks all the more impressive because of what it can keep pace with.

Of course, this also means that Honda needs to stop pricing their cars as though they’re in direct competition with the higher-end marques. While I lean toward Acura because I like reliability with my luxury, most people who are not gearheads are going to look at the price of the Acura, and then look at the BMWs and Porsches and Jaguars that are almost the same price, and they’re gonna go with the more prestigious brands.

If you can afford the NSX, you can afford to keep the clubs at your private country club. The hired help can lug them out of your personal locker for you. They will be waiting on your cart at the club house when you arrive.

Couldn’t the same be said for Lexus? Until recently, their attempts at fast cars with excellent handling fell flat. They come closer with the RC series, but are they trading buyers with Infiniti and Acura only, or are those European car drivers switching in big numbers? I think the former is more true than the latter.

That’s something I’ve wondered for awhile. At least amongst the people I’ve talked to, Lexus is seen as a notch or two above Acura - and is often seen as being just as luxurious as BMW/Mercedes/Audi without the reliability problems.

I’m not sure why Acura is the also-ran in comparison to Lexus. I mean, I know Lexus had RWD where Acura did not, but do people in the luxo segment really care that much?

I’m not sure why Acura is the also-ran in comparison to Lexus. I mean, I know Lexus had RWD where Acura did not, but do people in the luxo segment really care that much?

I suspect you’ve hit on the reason. Acura promotes itself as more of a handling/performance vehicle, however RWD vehicles simply handle better than FWD vehicles. Especially in decades past, before all the modern handling technology. Acuras ride more firmly, but don’t make up for it with better handling.

NOTE: this is a highly subjective opinion, not a scientifically established fact.

My own unscientific opinion is that my TL handles better than the contemporary Lexuses (Lexii?). I’ve been impressed with the way that big boat of a car feels like a much smaller boat of a car. The comparable Lexus I tried felt pretty numb by comparison.

I’m more than willing to acknowledge the possibility that the Lexus actually handles better on the test track, but the Acura feels like it handles better.

That said, the RL / RLX has been available in AWD for more than 10 years, and it still struggles to sell against its competition. For that matter the TL got the SH-AWD system in '09, although I can understand why people avoided the 4th-gen with it’s “styling by Gillette” chrome beak up front.

Lexus does have several models that have FWD in base trim: CT, ES, NX, and RX trims all have FWD or AWD (if available). The ES and RX models probably account for more than half of Lexus sales, I’m guessing, and the ES only comes with FWD.

Shortly after it launched (after a decade of delays) I was one of the lucky few who had a chance to drive the NSX last October. The event was held at a racetrack and Chevy had cars running the track (ATS-V), Dodge brought the Hellcat and Viper, Lexus brought the RC F and GS F, etc. Honda opted to allow only on-road testing of the NSX. So I drove the NSX and indeed it is lovely and it surely has amazing capabilities. None of which one can feel on the road at speeds that will not get you killed or arrested. @the_same_mountainbik is spot on. I drove the Miata back to back with the NSX and the Miata is way more fun on-road. As was the Fiat 124 Spider Abarth. Both are under $30K and look amazing in person. Having tested other supercars like the Audi R8 V10 on and off track, I am left wondering why people buy them or aspire to them (as I did for many years). Looks and a promise of some sort of fast driving are what I am left with. For real on-road fun the Miata and cars like it are better, and on-track, “affordable” cars like the ~ $70K Camaro ZL1 are faster than the supercars now. I hate to be that guy that pulls back the curtain, but the NSX felt just like a TSX on country roads. I’ve never written about it. I have written a dozen Miata stories in the past month. Maybe the other media folks are doing the same ratio to answer the OP’s question. In May, Honda sold 91 NSX’s, which seems like a lot for a supercar. Mazda sold 1,226 Miatas.