'The Most Important Road Trip in American History' 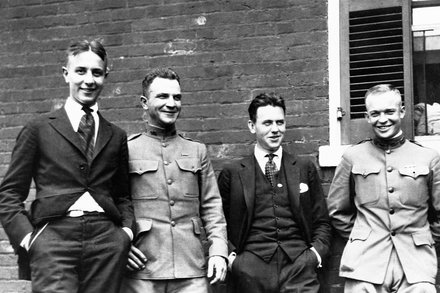 Opinion | The Most Important Road Trip in American History

In 1919, Dwight Eisenhower set off to examine the state of America’s roads — and showed that cars were the future.

The author was not entirely correct about the abundance of crude oil out of Texas spurring the development of gas engines and completely wrong about Ford wanting to develop gas engines.

The issue of the crude oil was that at the time, it was mainly used for lubrication, but the “volatiles” made it dangerous to use. The oil companies learned to refine the oil but that left them with a hazardous material, gasoline, that they had to dispose of. The development of the gas internal combustion engine was the ideal solution except for Henry Ford.

Henry Ford thought that alcohol from corn was the ideal fuel for automobiles. But prohibition ruined that for him and he had to get on the bandwagon for gasoline. BTW, Standard Oil of New Jersey (Rockefeller’s) donated about $4 mil to the temperance movement.

Actually, I think he is correct, for 1919. Ford and many experts thought ethanol was the ideal fuel, even at that “late date” of 1919. He’s correct, for the US, in 1919. We’d fought the war and the only alcohol used for for stoves.

Before 1900, gasoline was a left-over product. Stores sold it in bottles, as a cleaning solution. Alcohol was used as a fuel for high powered vehicles… but in the US it was taxed, so cars used the cheaper gas. Meanwhile, in Europe, gas was taxed and prizes were given for the development of alcohol powered devices.

In 1906, the US alcohol tax was dropped, and it was cheaper than gas (14c vs 22c) and farmers could produce their own. (There was lots of paperwork, until 1914.) The early Model T could run on either fuel, making it ideal for city and farm alike (1908)… alcohol where you could get it.

Starting in 1901, Texas oil exploration hit a boom. A decade later, gas was the cheaper fuel. There was also large capital put behind making it available.

The 1919 prohibition act made alcohol less available. Around that time they had discovered it made an excellent anti-knock agent when blended with gas. Zealots claimed “it’s a bargain with the devil”.

Well you’ll have to read the article to me. I’m not sighing up. At any rate, we are still having that conversation today whether or not alcohol is better than gas, so nothing new under the sun. We’ll let the market and customers figure it out.

Without reading the article I do recall that having seen the autobahns in Europe, Ike was convinced that we needed the interstates here. But as I recall as a kid, his interest was in being able to move military equipment quickly and evacuate populations quickly. For the first parts of I 35, we pictured how emptying the twin cities would go in a nuclear emergency. I suppose I was 8 or so at the time. Always considered that was the primary purpose with getting to work from the suburbs or taking a vacation to the Black Hills (no interstate there yet) secondary.

I recall as a kid, his interest was in being able to move military equipment quickly and evacuate populations quickly

+1
IIRC, the original name for the Interstate Highway System was… National Defense Highways… or something to that effect.

you’ll have to read the article to me. I’m not sighing up.

If you don’t read any articles at nytimes.com you can read this one, because you get 10 free /month. You can cut the nytimes.com cookies and get another 10 whenever you like. Or you could right-click on the link, save it, read the copy: nytimes.com doesn’t count that as an access. That’s what I do.

I knew the story already. I also knew it was principally the work of 3 other men who had been working on it for more than 20 years, visionaries who saw the problem of different rules of the road in different states and states not linking their own highways up to their neighbors’, just dead-ending at the state line. The law was ready to go without Ike’s effort; his trip in 1919 make him

Thanks for reading The Times.

You can right-click on the link, save the file, read the copy you just made.