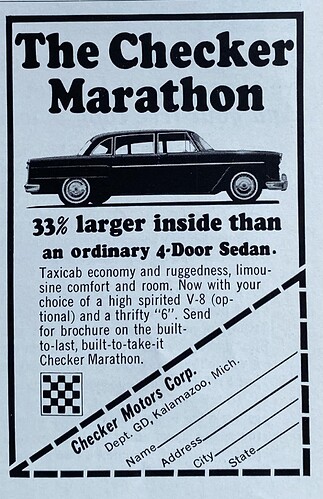 Notice how they make no mention of the actual fuel economy….

My father always wanted a Checker Marathon . I came close to buying him one that was in great condition . If I could have counted on him being the only driver I would have . But his second wife would let her worthless kids take their vehicles .

Actually, once they started using a Chevy drive train in the 1970’s, they werent a bad car. The heavy vinyl upholstery was indestructible, and they did have the interior space of a limo. Our friend and colleague @Triedaq loves them.

Way back about 1965 I had to take a cab to work. The local cab company had all these cars. I noted that the interior and other details were very similar to a 1955 Chevy. Very solid car. If you lived in Cuba and wanted a forever car, that would be it. I’d repaint it though from yellow.

“”Civilian” versions were available in numerous colors, even an optional vinyl top, with an opera window.

There’s a Checker Marathon in the area in Gold that sounds like it either doesn’t have an exhaust system at all or at least straight pipes. Not sure what exact year it was. There’s one on Hemmings that’s Black for around $20K