Summer cross-country roadtrip in my '98 Forester

Need to take my '98 Forester, with 208,000 miles, from DC to LA — and back, in about 6-9 months. The car runs great and just received a clean bill of health on its pre-trip inspection, but I know high mileage cars can be… unpredictable. So my question is, what should I be looking for and checking on my trip? What issues might I anticipate? Planning to check the oil regularly.

*Most recent major work – replaced radiator (and timing belt) in 2017 after oil leaking issues.
*Car has been consistently well-maintained. But especially the last few years, I don’t drive often (around 1,000 miles per year).
*I know Subs of this age have head gasket issues – this one had the HG replaced back in 2008.

Stay on well travelled interstate highways, keep your cell phone charged, have water to drink if you get stuck, and have a good time. You might consider driving during the day and finding a safe place to sleep at night.

Did you tell the mechanic of your plans? Do they know Subarus? If yes to both, I’d just make sure the oil’s fresh, tires in GREAT shape, and bring along some oil and a gallon of antifreeze premix just in case.

Just take your cell phone , get a AAA road coverage policy , have really good tires or even new ones , purchase an inexpensive rechargeable battery jump pack and take your title . If this thing does fail during the trip it might not be worth while to pay for a large repair bill and lodging at the same time . It could get there and back with no problems or it could completely die before you even get out of the state .

+1 to the previous suggestions, but I want to add a recommendation that the OP keep his tires inflated (when cold) to 2 or 3 psi over the mfr’s suggested inflation, and to be sure to check the inflation pressure each morning before getting on the road.

Also–presumably the recent mechanic’s inspection included the serpentine belt.
Is that belt in good shape?

Yes and yes. And tires were replaced about 2 years ago. I’ll make sure to grab some antifreeze premix (got some oil already). Thanks!

Didn’t specifically ask about the serpentine belt. Despite only having driven about 4,000 miles across the last 4 years, I have taken the car in to my well-respected mechanic every 6-12 months for oil changes or tuneups so I presume that they’d catch a worn belt?

It is really not possible to tell if a serpentine belt is worn . They are usually replaced by a time of use factor . If it is original then replace it .

I think jt sanders has it pretty well covered. Take a gallon of water - for you or for the car. Water can be used for a while instead of antifreeze in the car, and in you. I disagree with staying on well travelled interstate highways: soul killing tedium need not be the cost of a cross-country trip. Have a good time. How often will you do anything else like this?

PS - Take the title. It may free you.

I assume you’re aware of this, but you’ll be crossing some mountains in winter, so you might need to allow for an unplanned stop or even a change of route if a winter storm interferes with your plans.

I’d be looking for good prices on flights.

The OP will drive from LA to DC, the reverse of the outbound route. A lot of the snow will be avoided by using I-10 until it’s convenient to drive north, like picking up I-59 near New Orleans, continue on I-75, then I-81 northeast, and finally a little I-66 into DC.

Just drive it and if it breaks down have a tow plan, cell phone and flexible attitude.

With the timing belt situation taken care of and assuming you keep an eye on the motor oil level I don’t see a problem with this trip other than the godawful boring stretch from OK to LA.

From around OK City trees and other scenery pretty much disappear into a flat wasteland of nothingness. Coffee or caffeine pills might be needed…

Also might want to have either satellite radio or some kind of app for radio as there are lot’s of wide open area’s of many mile’s wih no AM or FM radio reception.

If the weather allows, I’d much rather take I-40 than I-10. Much better scenery.

Maybe Flagstaff, AZ and the Cadillac Ranch just west of Amarillo…(Take along some spray paint for the Cadillacs. Everyone does)

Drive careful through Albuquerque. I’ve been through there 6 times, done nothing at all wrong, and got stopped 3 times by the police. The last time they searched my car and found a Crown Royal bag full of spare change in the glove box. After throwing it all over the floor while I’m standing in the snow in 28 degree temps one of the 4 cops on hand wanted to know “Which 7-11 did you rob?”. Yep, keep it classy…

During the summer, taking I-70 to Cove Fort, Utah and then south on I-15 into LA would work, and could be quite scenic for much of the way. Easy, too, since I-70 starts in Baltimore. Only 2200 miles to Cove Fort from Baltimore. 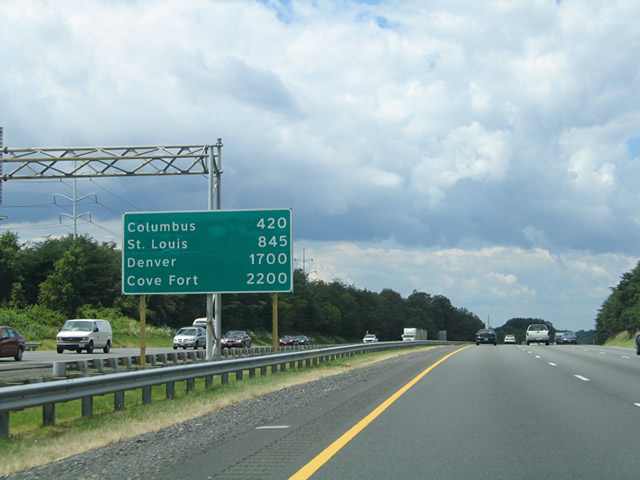