New subaru ev is made by toyota. Subaru site says it has famous symetrical awd? It does not have transfer case. Motor on each axle? Its subie in name only?

Subaru designed its AWD system, and it has separate electric motors for front and rear. The essentially identical Toyota version has AWD as an option, but AWD is standard on the Subaru version.

They’ve partnered in a few cars, so I imagine Subaru got to design the AWD system, which Toyota will use on its version and the Lexus version. Designing an all-new vehicle with an all-new propulsion system would be a HUGE effort for Subaru.

And, while we are on this topic, a new article from Consumer Reports explains why the Subaru Solterra will soon be much cheaper to buy than the essentially-identical Toyota bZ4X: 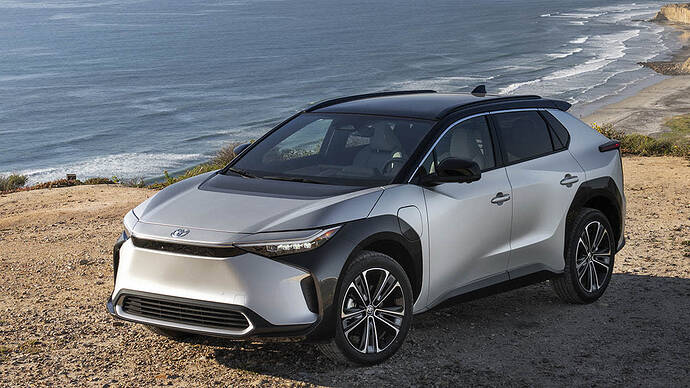 With the sale of its 200,000th plug-in EV, Toyota has reached the federal electric vehicle tax credit limit. Future purchases won't be eligible for the $7,500 tax credit.

Saw a video tour of car. Under hood stuff is bulky. Almost looks like a motor. Tesla sedan has less room and it has a frunk. The Toyota is a suv and has a ton of junk under hood. Seems odd.

I doubt that anyone can take possession of a Toyota EV because of the recall. The wheels fall off. The recall applies to the Solterra too. While there are about 500 total of both vehicles in customer hands in the US, there is no fix and you can’t buy either and take delivery for the foreseeable future because of the recall.

The wheels fall off.

I was watching the Bond film Diamonds are Forever recently. One scene, a 60’s American steel muscle car rolls over, and one of the wheels falls off in the process. Wasn’t expecting to see that. Wondering what broke that allowed the wheel to completely separate from the car? Didn’t see anything obviously poking off from the dislodged wheel, but maybe something was hidden behind the wheel. Spindle broke off knuckle? Wheels falling off, it’s a puzzle.

Here’s a snippet from the article I read in CNET. Toyota, and I assume Subaru too, will pick the car up and provide a loaner until it’s fixed.

“After low-mileage use, all of the hub bolts on the wheel can loosen to the point where the wheel can detach from the vehicle,” Toyota said. It’s pretty obvious why this is not good.

I presume “hub bolt” is the fastener that holds the wheel to the hub. Similar to a lug nut, only it’s a bolt. My old VW Rabbit used hub bolts, wheels never fell off. Seems the technology to hold the wheel to the hub is pretty well established, hard to figure how that function could go awry. I expect some embarrassing questions are being asked at those engineering departments … lol …

The new Toyota and Lexus vehicle designs are using hub bolts like the ones used on German vehicles, seems to be some engineering problems.

A second recall on the bZ4X was issued today for incorrect tire information labels.

Has no boxer motor. Has no transfer case. Says it has subie sym awd. It does not.