I was replacing my timing belt now…

My camshafts top dead center marks aren’t aligned with my crank shaft top dead center marks. It’s off by about a half inch. I can’t turn the engine past a certain point now. When I took off the old belt it all matched up I may have accidentally turned them when I put on the new timing belt.

Also the camshaft pulley on my driver’s side (exhaust )doesn’t have a timing mark.

Do you have a factory service manual or access to AllData? You need one of those for this type of maintenance. Even a pro would not do this without one of those.

No I don’t have all data nor the factory manual. What exactly does this fix entail. I saw the video that you posted before.

What specifically would I have to do to fix this?

Does the manual say to lock cam sprockets so they don’t jump when belt is removed? Some cars say rotate crank to 60atdc for example to get all pistons down so you can rotate cams with no risk of valves hitting pistons. A manual would spell this out

IT DOESN’T SAY THAT IN MY BOOK. 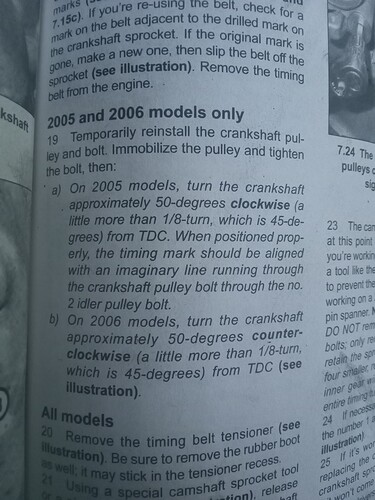 I just set it to TDC like Haynes manual said. Wonder if this is the problem. I have a 2001 though

The Haynes manual said if engine gets restarted just rotate it back. 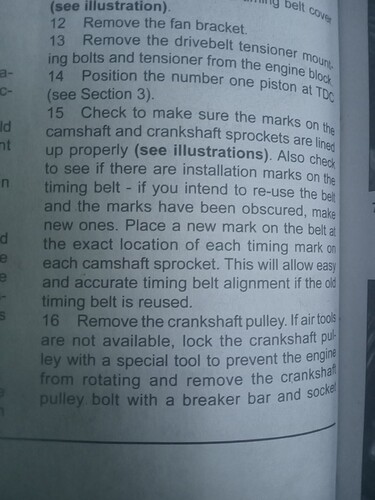 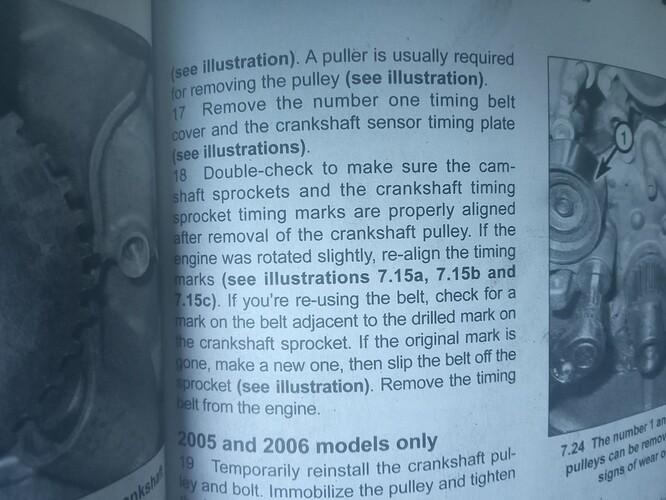 I can’t turn the engine past a certain point now.

Much caution advised at this point. Pistons may be up against valves, preventing motion. Don’t try to force anything to turn, otherwise very expensive engine repairs may be needed.

I did this job on my Corolla. Other than dealing with removing the engine mount, not overly difficult. I have the factory service manual, just followed the instructions. On my engine belt goes 'round two camshafts, but the camshafts are geared (locked) to each other. I aligned the timing marks, removed the old belt, then just slipped the new belt on in the same way it was when the old belt came off. When the camshafts are independent – as appears to the case here – installing new belt while keeping everything aligned is considerably more difficult b/c camshafts will turn as you put the belt on. You end up with slack in belt between camshafts. No good, engine won’t run correctly. Advice above to figure out a way to lock the camshafts during belt install is the trick.

If you don’t have the correct written procedure for your make/model/year/engine , suggest to stop all work and find that before proceeding.

Crankshaft the 0 is TDC obviously 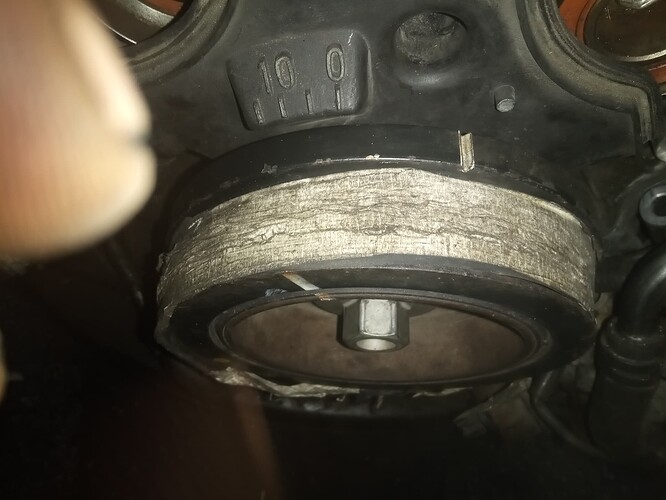 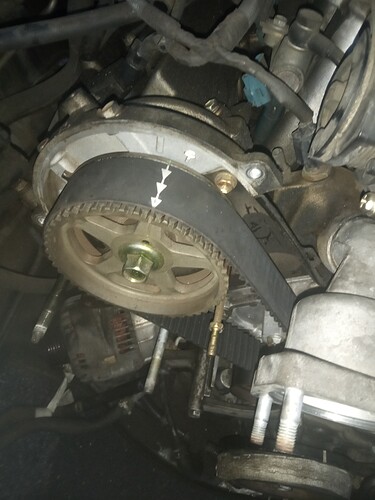 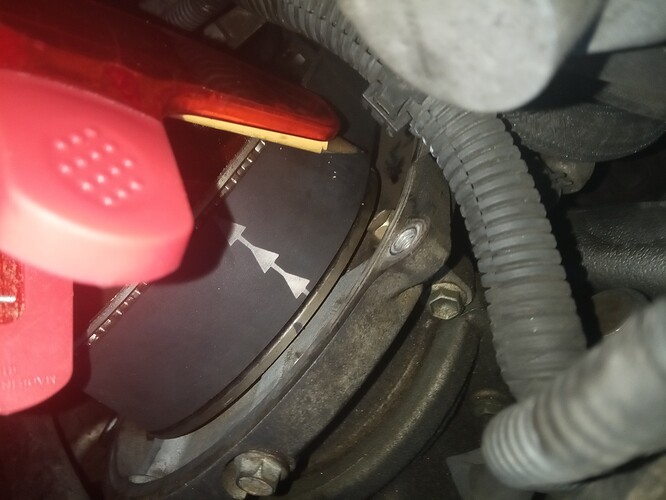 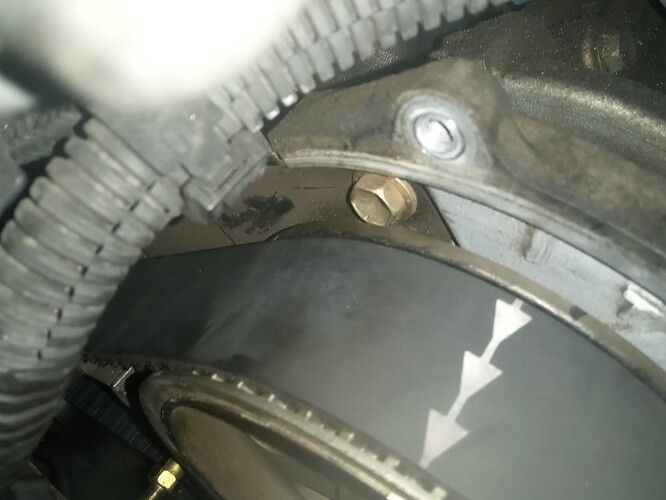 Crankshaft the 0 is TDC obviously

Maybe I’m misinterpreting your top photo, but it doesn’t look like the crankshaft is at TDC to me. I’m also expecting to see the little grooves in the pulley for the timing belt ribs, but not seeing any in the photo. Explanation?

The notch on the crank pulley should be lined up with zero. 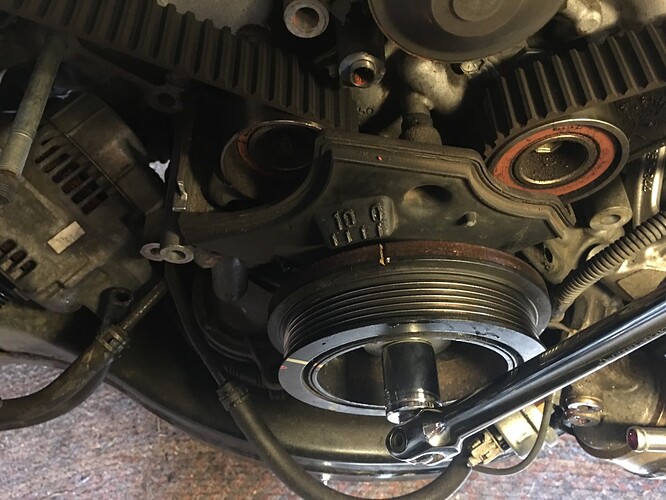 Yes, that’s what I’d expect to be seeing if crankshaft is at TDC.

I reset crank to TDC just now. I didn’t do that before I took those pictures because I was worried about bending a valve since I felt resistance.

The Camshaft (intake not exhaust) moves when I take off tensioner. And it’s still off, it 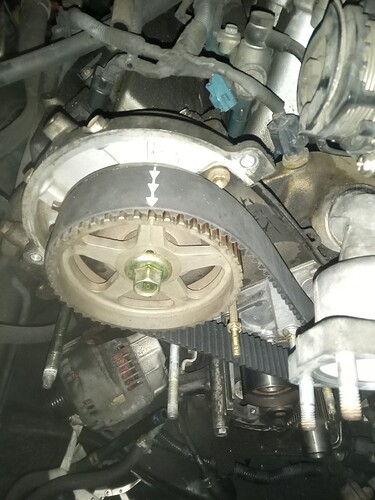 The marks on the cam pulleys must line up when the tensioner is released. 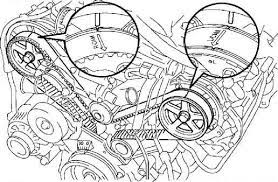 The Exhaust CAM is still off about the same amount. AND I just now set the crankshaft bolt to TDC.

Here’s the Question should I turn the bolt on the Cam Exhaust to bring it to us TDC mark WITHOUT the belt attached? Would that bend a valve?

Pencil is pointing to TDC on Exh. Cam Sprocket and the Vertical line next to the “T” us the TDC for the Cam 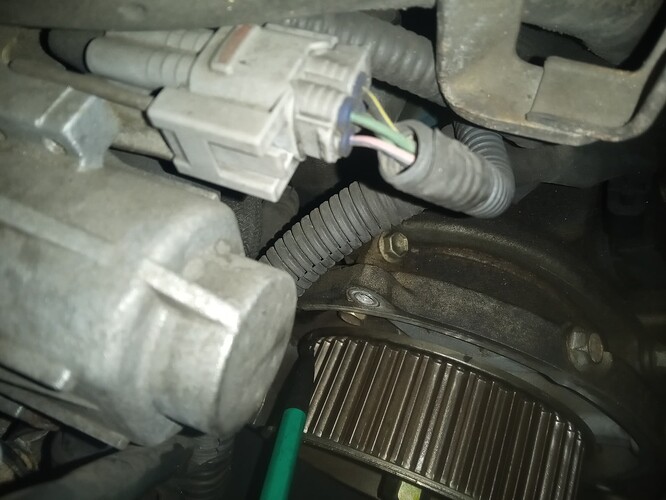 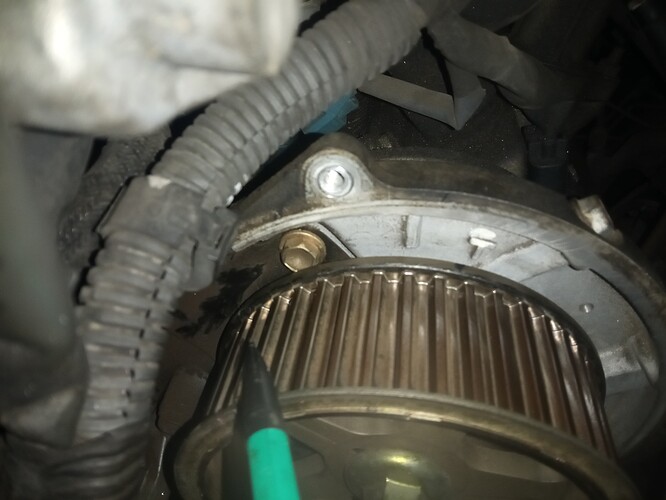 I understand that Tester. I only took those pics because I felt tension and was afraid toBend a valve. I’m passed that now though. I’ve set the Crank to TDc the way it’s suppose (after I took those pictures) now it’s lines up to the “0” and the cams are still off

All the timing marks must align properly with tensioner installed and tension applied. This process can be fiddly especially with independent cams, so often work has to be stopped, adjustments made, and belt put back on, and re-checked. Even if you get them to align, they marks must also align after each 2 crankshaft revolutions which brings valve in same orientation. This should be stated as part of the procedure in your repair manual. In other words, once new belt is installed and marks look good, you have to manually turn the crankshaft and check again. Then do the same thing again to double check the marks are staying perfectly aligned. (Crankshaft and camshaft shouldn’t be turned backwards, at least not very much.)

As to whether you can safely remove belt and adjust camshaft at this point without damaging anything, that’s something an experienced tech would know. Hard to say via the internet if it is something a diy’er could do or not. It seems like as long as not much force is required to turn the shafts you’d be able to tell if something was in the way & preventing them from turning. Some force required to overcome the force of valve springs for the camshafts, and you’ve got the spark plugs removed right? So with no compression effects, turning crankshaft shouldn’t require any major forces. If you aren’t sure, best bet is to tow car to shop and pay them to align the marks, then if you like you can tow it back and put everything back together.

When I did that job I used white-out (typo correction fluid) to make all the timing marks (both on the engine and on the pulleys) crystal clear. Suggest you consider to do that as well.

The cam timing marks must line up with the “T” 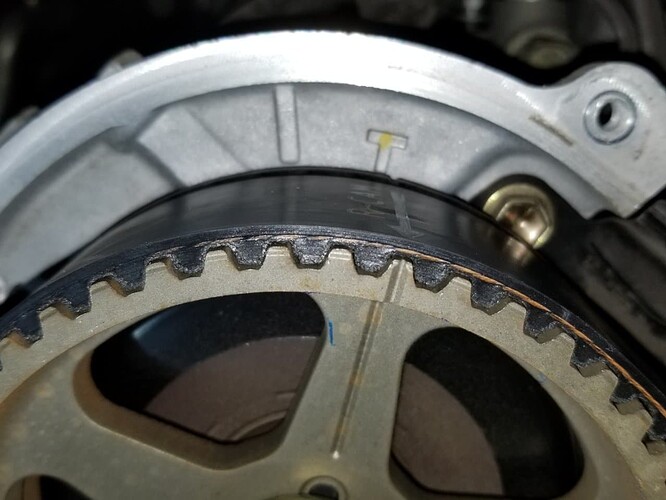 The book says the line and not the T 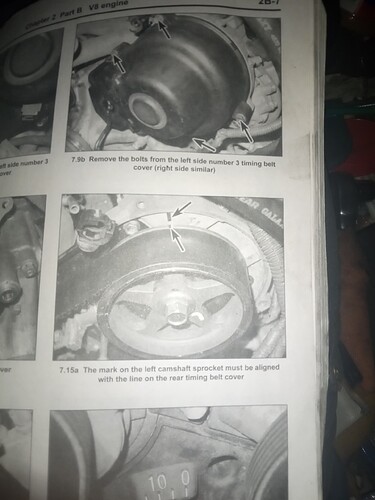 Bringing it to a mechanic is a very last option. What would I need to do to fix this myself