I have a 2002 VW GTI, which I absolutely love. I put aftermarket wheels on, and when I did, as I do with all my cars, I put a set of McGard locks on. These are the type of locks they are: 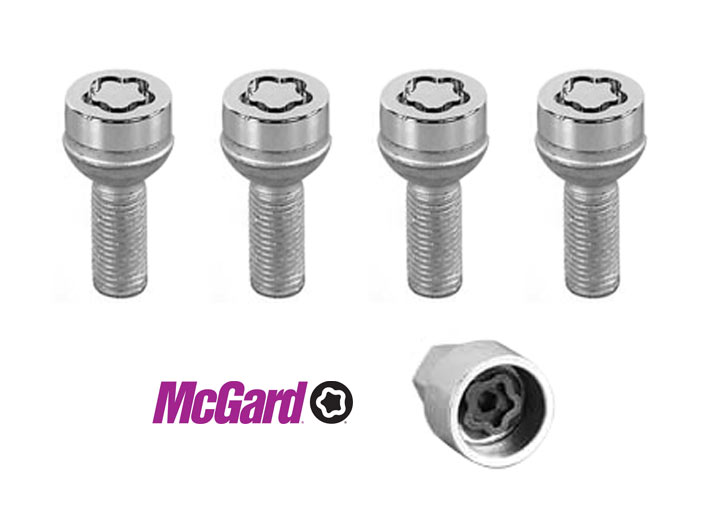 I’ve had them on my car for over a year, I have taken them on and off hundreds of times. Recently I went to do some maintenance on my car and when I tried to take the lock off, my key broke. I contacted McGard and got 2 new keys. We tried numerous ways to get the bolt off and it the process broke both of the new keys. We put some serious torque on the bolt and it would not budge, I can get all the other lug bolts off, just not this one. So since all the keys broke we decided to try using a socket, hammered it on over the head of the bolt, and tried to get it off that way. Well, we got part of the bolt off, apparently the key/lock part of the bolt is pressed onto the rest of the bolt and broke free, leaving the main body of the lug bolt still in place, still stuck. The next logical step in my mind was to try to drill the head of the bolt off, so at least I could get the wheel off, since you can’t get to the bolt to put anything else on it or cut it off. After spending $75 on drill bits I have gotten no where. I have been using cobalt drill bits with cutting fluid/oil but they aren’t making a dent in the lug bolt. I have called around and everyone has told me that they can try, but won’t make any promises and that they will most likely damage the wheel. They no longer make the wheels I have on my car, I can’t find a single wheel the right size, and I can’t afford a new set of wheels right now. So before I hand my car over to a shop who says they are going to ruin my wheel, can anybody make any other suggestions?

Thank you for the help. If you need more info please ask.

You’re probably going to need something like this. http://www.craftsman.com/craftsman-bolt-out-trade-damaged-bolt-nut-remover-set/p-00952160000P

I have those, and they won’t fit in the well where the bolt is.

Can you get some new keys and try loosening with an impact wrench? A few cycles of heat and cool even by throwing water on it might help.

Thank you for all the responses and help. I actually finally got it off. I use a tool similar to what Tester suggested in his first post that I had bought a couple weeks ago. The reason I didn’t use it then was because it didn’t fit in the well where the bolt is. So I finally had a brilliant idea, grind that tool down until it fits, luckily the tool I had simply used a 1/2" drive ratchet so grinding down the tool wasn’t too big of a deal. After about 10 minutes of grinding, the tool fit and the bolt finally came loose. Surprisingly the threads looked fine, so I guess it was just way over torqued.

Thanks again for e help!

That’s called thinking on your feet.

If all tire thieves needed was a lug wrench then we would all have bicycles. The tire lugs are a stupid thing to use as a protection. I can take your tires with about 10 minutes and a good grinder( battery powered) Just have standard bolts and for the security paranoid put in an internet car camera to get the utube video of the perp.

Just my 2 cents, but any time I bought a car that had locking lugs, security lugs, or what have you my first act is to always ditch them and replace them with regular lugs.

If I had to live in an area that required me to worry about my wheels coming up missing then I’d consider moving.

Not that I’ve ever needed it, but my vehicle protection system is a Mossberg 500 Persuader.

Having or not having locking lugs is really irrelevant to this conversation. I’ve used them since I bought my first set of wheels. Can thieves get your wheels off still? Yeah, but if they look at my wheels and see the locks, then look at your wheels and see no locks, they will take yours because they are easier. After going through what I just went through, am I going to put locks back on? Nope, because I don’t want to have to deal with this problem again. I only used them out of habit, the place that I bought my first set of wheels from put them on all the cars they put wheels on, and I just continued the trend.

As far as living “in an area that required me to worry about my wheels”… You are not in “great” areas 100% of the time, there is always somewhere you have to go that is questionable. And even if you live in a nice area, which I do, crime is next to nonexistent here, our crime rate is better than the majority of the country by far, and the police department is across the street, but there is still crime. Guess what type of crime? Theft, my car has been broken into in my driveway, neighbors cars have been broken into, garages have been broken into, no matter where you are there is going to be crime. As for your Mossberg 500 Persuader, while it would be a great tool to stop a criminal, unless you are sitting out there with it all the time, its not much of a deterrent.

I have been in a lot of lousy neiborhoods. I have NEVER seen a car stripped of its tires that was not already totaled. Thus the protection concept is largely moot because folks really do not so much steal tires as they steal the WHOLE car.