My dad has had a 1954 Bentley Continental for 30 years. He has always had it stored in a neighbor’s garage, for which he pays rent, but he used to take care of it. Now he hasn’t driven it in over 10 years! I got my license recently and I would like to drive it. Is it still driveable? If so, what do I have to do to before I drive it. He’s been thinking of selling it and I really want to keep it. Thanks.

Unless you happen to have a LOT of money, there is no way you are driving this car any time soon. It will need new tyres, belts, fluids, battery… and that’s assuming that nothing has rusted and that it was at least started up once every few months. Otherwise there is likely to be rust in many expensive places. If it seems like it is in vaguely good shape, hold on to it… for possible use in the distant future. In the meantime, get a Volvo 240/850/S70, an older Honda Accord, a Toyota Camry or some other similar mid-sized, cheap, safe and (in the case of the Honda and Toyota) reasonably reliable car. Something with ABS, airbags and a fair bit of crumple zone between you and everything else.

It is likely that the cost of getting a '54 Bentley from stored-for-10-years condition to running condition will cost more than a used Volvo/Toyota/Honda in decent condition, it will be nowhere near as safe to drive, it will be far more expensive to maintain and far less reliable. Additionally, because you’ve just obtained your license we can assume that you are a teenager and are likely to experience a least one or more significant lapses in judgement and that would likely mean the end of the Bentley.

You are going to trash your first car. Everyone does.

Save this car for when you are older. It will need the same rubber, fluids, and TLC in 10 years as it needs today.

The gas has long turned to varnish in the tank, fuel lines, and carburator. So before you can even start the engine, these issues will have to be taken care of. 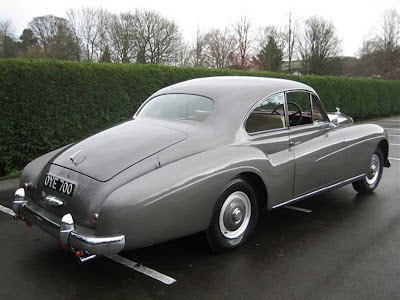 While your father’s is in much worse condition, please do nothing to this car to mess it up. Either ask your dad to hold onto it until you’re in a position to take proper care of it, or, if he chooses to sell, help him research the best way to sell a rare car like this.

After 10 years sitting in a garage, no, it’s not drivable, and it will probably take a LOT of time and money (mostly money) to make it drivable.

If you spend the time and money, and it really is a '54 Continental, the car will be almost too valuable to risk on public roads.

Help your father determine what the car is worth, and then the two of you can decide what to do with it. Restoring the car would be a fantastic father/son project.

Take a look at the prices of Bentley Continentals at http://www.Hemmings.com for an idea of what such a car might be worth.