Snapped bolt, how to remove?

Broken bolt’s anchor which is embedded inside the charcoal canister also broke and now rotating freely and I cannot remove it. A photo is attached. Any suggestions? 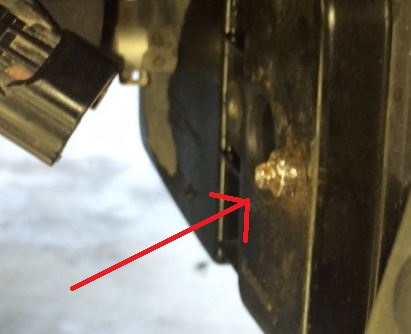 Take something that can be placed under the head of the bolt, and pry the bolt away from the surface while loosening the bolt.

And hopefully that will lock whatever it threads into so it doesn’t turn.

It might be screwed to a captive nut on the other side of that partition. And the captive nut has broken free from its moorings, so when you turn the bolt, the nut turns with it. It might be possible to remove that partition by remvoving the other fasteners, then you’ll be able to see what the actual problem is w/the freely rotating bolt. Try the above idea first though, and if prying doesn’t work try a big magnet to pull on the bolt. Or glue/weld something to the bolt that will allow you purchase to pull on it.

The bolt head broke off. The round thing that you can see is from the body of the part (captive nut #2) The bolt shank won’t come off because the whole thing now rotates freely. I cannot open the black side because it is an air-tight charcoal canister, opening it will make it draw air and give fault codes on ECU.
Here is a close-up of the bolt with broken head and shank and free from moorings. 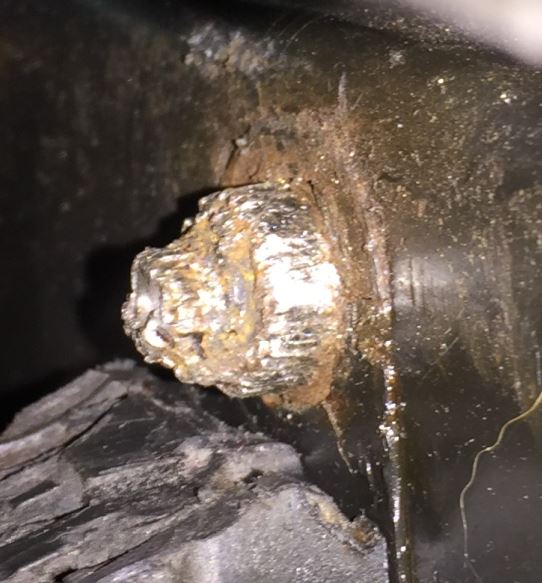 You can’t cut it off (with a Dremel - or cheap Harbor Freight equivalent) and then re-fasten with a sheet metal screw (or even one of those wallboard spring-loaded “wing nuts” that you squeeze through a hole and they spring open to straddle the hole on the inside)?

Were you the poster with the evap code? And is this where the vent valve mounts to the charcoal canister?

Trying to figure out what I’m looking at, although I still might not be any help. It looks boogered up, like you’ve already tried vice grips or pliers. One thing to consider, if you do get the piece of the bolt out, how are you going to tighten the new bolt if that nut-sert looking thing is just spinning in the plastic?

Are you certain it isn’t possible to disassemble the charcoal canister?

I think that is a lost cause trying to get that undone so maybe time to re-engineer the thing. What attached to it and why does it have to be there? Is it just holding the canister? So leave it alone.

If you just have to have new threads to bolt to, maybe this.

Yes, I am the unfortunate OP of the P0446 code. The bolt head broke and the shaft started spinning while trying to take out the EVAP vent solenoid.
How do I re-engineer and still attach the replacement solenoid?
These before and after pictures may help the readers to understand my situation. 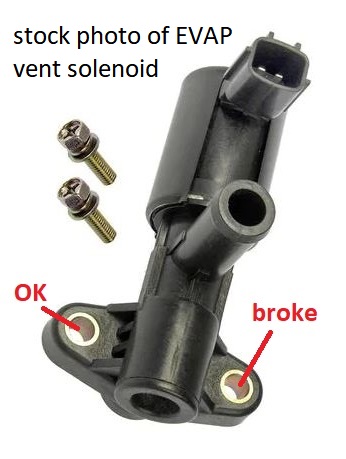 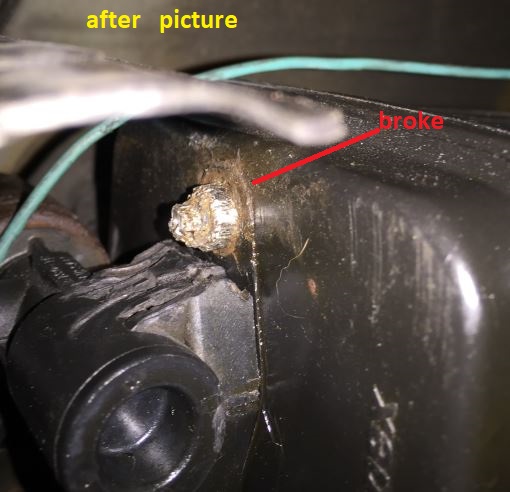 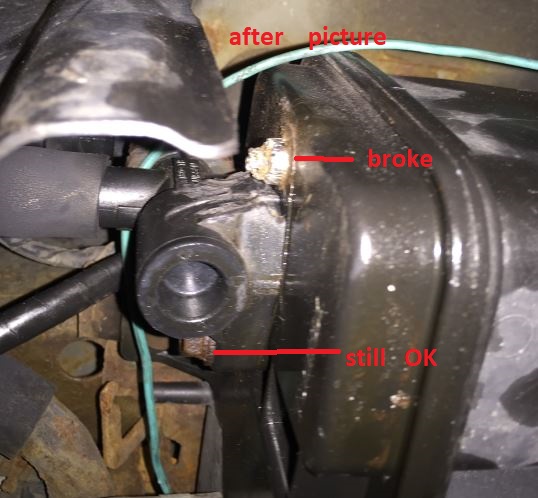 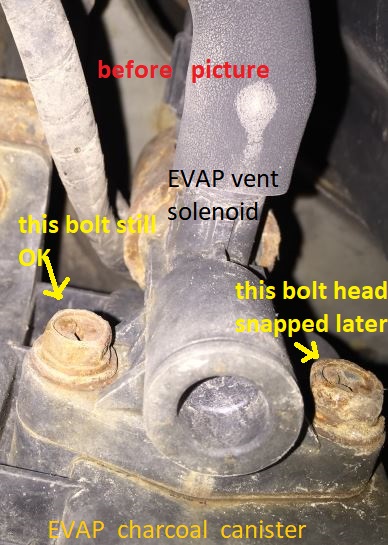 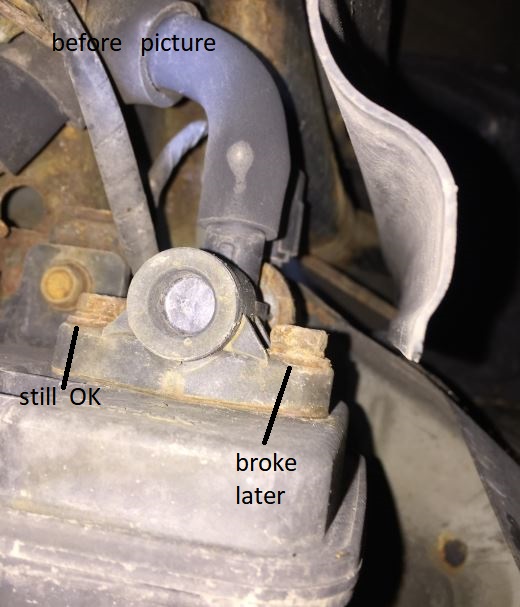 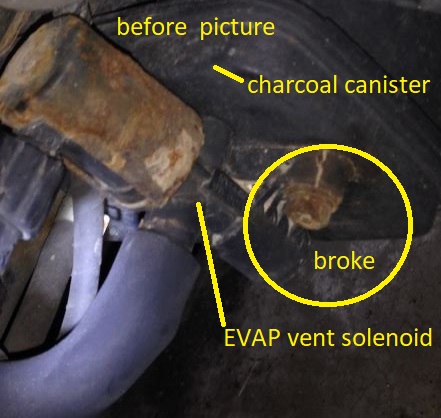 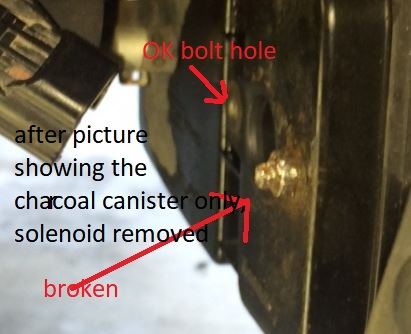 I do not know what position/attitude the bolt aims when mounted (vertical, horizontal, up, down, etc.). I would clean up the stub, mount the solenoid with the good bolt, and overfill the stub hole with JB Weld, like a mushroom head, let cure fully. Since the stub can’t be removed, it should hold.

Cut the end of the valve off and hold it on with one bolt. Use some glue or sealant to stop the vibration that might crack the new one.

Maybe a replacement solenoid and canister from your local boneyard?

Here is a photo to show the orientation. 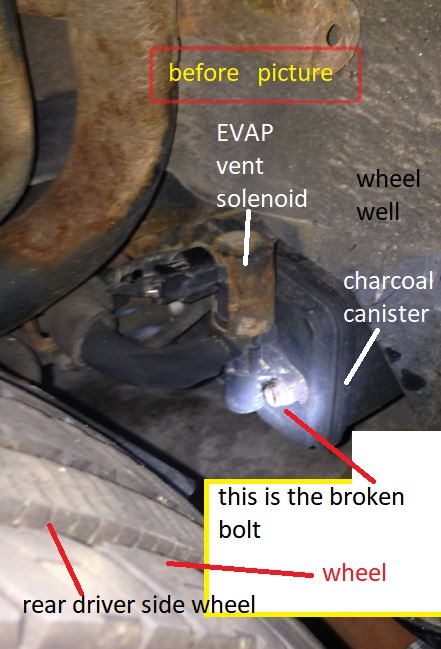 OK, it’s a little clearer. There is a gasket between the solenoid and the canister so you need the two bolts to hold it tight so there is no leak. Until a real mechanic can advise, what I’d thinking, depending on the access, etc. is take an angle grinder with a cut off blade and cut the dang bolt off flush against the solenoid flange, and remove the sol. Then depending on the kind of crazy threaded stud they have on the canister, you might be able to just knock the thing out. If its like what they used on air cleaner housings, I always used anti-seize because they would rust up so bad. So then if you’ve got an open hole, you can put a new threaded stud in there with a new bolt to match.

Another way would be to put a stud up above and then a heavy metal clamp to hold the solenoid but one way or another you can’t salvage that one stud-I don’t think. Yeah maybe it’s easier with just a new canister from the junk yard.

Edit: If when you get that solenoid off, if there is access through the hole to that insert, you might be able to just use a short tee nut (at Ace), and a big glob of JB Weld being held in place by a bolt and nut on the outside until it hardens. Then gently secure the solenoid and hope you never have to take it off again.

Thanks for the tips. The charcoal canisters for this car are very expensive. I need to re-engineer everything so I can re-use my existing canister and maintain air-tightness and also attach the solenoid securely.

See above. That’s all I can think of. Maybe a mechanic will have better ideas. The dang things are just plastic though. But you’re gonna have to get a new threaded insert in there somehow. Can you get the canister out to work on it on the bench? Always easier.

There is an O-ring on the stub that is inserted into the canister, that is the seal. You only need one screw to hold the valve in place.

When you are finished I suspect that you will still need to identify the evap system leak.

The charcoal canisters for this car are very expensive 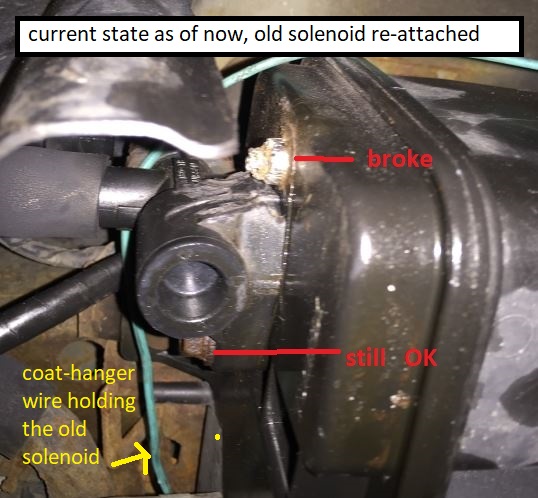 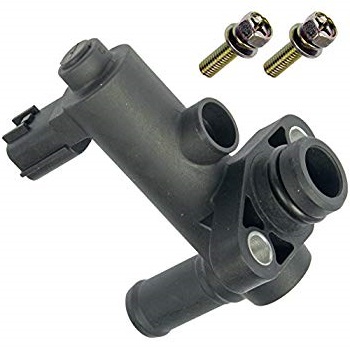 That seems to be how I remember it working, but I may be mistaken. I do recall GM charcoal canisters being prone to clogging up with dust on trucks used off-road, so they must not be totally sealed.

It may take a few drives to get the check engine light to go out, or to reappear if you cleared the code but didn’t find the problem. I’m betting you found the problem if that valve didn’t function before but now does.

Good luck! Let us know how it turns out.

The vent valve has to seal. If it doesn’t, a large leak will be detected in the EVAP system when it performs its self-test, causing the Check Engine light to come on.

The charcoal absorbs the gas vapors so they can be burned in the engine when the purge valve opens.