Now I have a question for you guys. The oil in the title is on sale right now at a very good price. Does any of you have any experience with Bardahl oils? (yes, I need 20/50 oil). Normally I use Duckhams and - if not available - Castrol.
Thanks in advance

Here is a link if it could be usefull:

I don’t believe that this oil is sold in the US.
Here, Bardahl was an old-time brand of oil additives, but I don’t recall ever seeing motor oil branded with that name.
Nor is Duckhams oil sold in The US.
Castrol, of course, is sold here.

Just out of curiosity…What type of vehicle do you have?

Never heard of it…and never seen it sold. Not saying it’s not good…but have no idea about it. Personally I’d stick with a name brand oil with a proven track record.

Looking at the Bardahl site, it sells additives in the US, but on the UK site it lists oils. So I would think it would be OK if it meets the specs your engine requires. Pure guess on my part…

And before you jump to conclusions, it was an unlimited hydroplane: 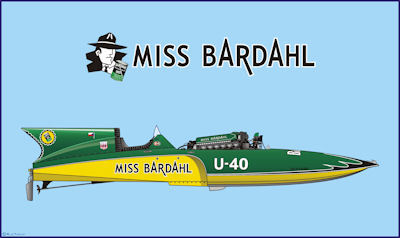 I see. I was sure it was on the market in USA. It’s only a few years back Bardahl began to show up here and I remember seeing a lot of their products in USA, not oils though.
It’s for a Morris Minor and 20/50 IS required. Have tried 15/40 and it caused a significant drop in oil pressure on a known good engine.

The problem with 20/50 is that during cold weather it takes on the characteristic of tar. It would seem to me that any significant drop in oil pressure may be related to an engine that is not as good as thought or they were built new with horribly wide clearances on the engine components.

Neat car though. Many years ago I had '59 Morris Minor along with a couple of parts cars; all purchased for 75 bucks.
The '59 ran good but the hard part was getting over the large yellow daisy that had been painted on the roof. That always led to looks and questions…

I don’t see an SAE or API badge on the bottle. That would cause me to turn away.

I remember the Bardahl name from when I was a kid. I don’t remember what fluids they sold, however.

@ok4450
I know what You mean, but even the sticker on the valve cover says 20/50 only, all literature and the factory says 20/50 only. Besides, the engine in question WAS a good engine and serviced me for around another 100k miles and app. 4 years. I then sold it with the engine running very fine.
Even though, at minus 25 degrees celsius and the starter sounding as it only got 6 volt - they have always started if properly maintained. Also remember, even though that engine was in production until the late -80’es, the production started around -50. Not the most modern design when it reached the end.
If I can’t trust the factory and the guys who designed the thing - then who can I trust.
Well, the car I drive now is the one the pic.

Holy cow, you’ve got a Morris Minor? I had a 1960 years ago. Maybe that’s how I killed it because I know for a fact I never used 20/50 in it. Don’t know what I used but it was pretty shot when I got it. It would be fun though to have another one.

@Bing
Holy cow, you’ve got a Morris Minor?
A Morris Minor!!! I have three. And I wont part with any of them. I’ve had and driven Minors continously since -76. Please keep this as a secret as I couldn’t get a drivers license before late -78 (18 years old).
Over the years since then, I’ve had and used more than 20 of them. Most of them bought as “wrecks”, done up to a really good condition and then shortly after, some idiot offered me some stupid money, which I couldn’t resist. Oh - well. On to the next.
The one in my pic, I’ve had since 8/91 and is a Danish car. It was with me when I moved to Ca., drove me from Hoboken, NJ to Chico, Ca in 4 days with all my belongings, got it reg. there, later shipped to UK, reg. there, drove it there for 2 years. Moved to France, reg. there and now I’m back to DK. So I have 4 different sets of reg.papers on it.
I can’t sell that car. I have to apply for a divorce.
I have to think, that if anybody should know the Morris Minors - I should be ashamed if it wasn’t me.
Am currently restoring an early -71 Audi 100 Coupe. One of 384 surviving of the early models worldwide.
Btw. The Minor in my pic is my daily driver all year around, doing around 15k. miles a year.

They are not too common here anymore. It was my first car back in 1966. I paid $125 for it and it was in pretty poor shape. Engine, brakes, trans needed work, etc. But it was fun. Painted it and worked on some of it until I hit my budget limit and sold it still needing engine, trans, brake work and who knows what else. It was really a very comfortable and smooth riding car though.

My son-in-law has a lot of motorcycles, all European, that take 20w-50, he swears by Castrol. But I have never seen the other two brands you mentioned.

I read about the Morris Minor restorations in the magazine Practical Classics all the time. That’s a fun car. I’ve never heard of that brand of oil. For modern engines I’m not inclined to switch oil brands. Once I decide on a brand and version I keep using it to prevent problems with additive incompatibility. But for older cars, probably not a problem.

Bardahl has been making specialty lubricants and additives for MANY years…They are a respectable company…The U.S. consumer market is just too competitive for them so you don’t see their products in retail stores very often…They do not sell consumer packaged motor oil as a rule, but will provide specialty lubricating oils, including motor oils, if they see a void they can fill…The 20-50 “Classic” product is not listed in their current sales brochures for products distributed in the U.S.

Back in the day someone used to run a P-51 Mustang sponsored by Bardahl. I think there was a Bardahl 1 and Bardahl II to the best of my hazy memory.

I seem to remember a BMW motorcycle I had running factory recommended 20/50 and all of the old Harleys run straight 60 weight.

Those Brits do like to keep a stiff upper lip.

10W-50 Synthetic would do better in the cold; and still keep oil pressure up when hot.

There was also a " Miss Bardahl " unlimited hydroplane

Castrol is one of the few brands I can buy in 20w50 locally.

Bardahl? I’ve heard of it, but never seen anything but the additives for sale.