Rust on the Exhaust Header Manifold

I went to a repair shop for the first time to get my radiator replace. When he opened up the hood, the first thing he said is that I needed to replace the Exhaust Header Manifold because it was rusty. I thought it was normal to have rust on the Exhaust Manifold since it’s always hot there. The car is not having any problems or making any noises, however I’m not very knowledgeable about cars and would like to know if I need to replace it now or if I still can run a few months. Thank you so much🙏 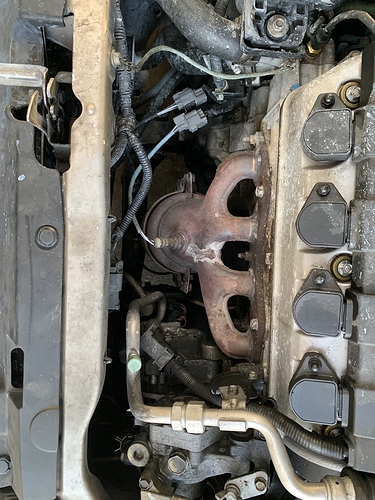 Rust is normal, but that looks like a crack in the manifold that someone had tried to patch. If indeed it is cracked, I would replace it.

Agree with @Purebred. That white stuff on the top is sealer that was applied to plug the crack clearly visible in the picture. Your mechanic doesn’t want to replace it not because of rust but because of the crack. Looks like the catalytic convertor is built into the manifold so it won’t be cheap.

Exhaust fumes can kill you so it is serious. Leave your windows open. You could smear more muffler sealer on it. It might work for a while until you can replace it.

Well now hang on. OP never said anything about an exhaust leak and he said it wasn’t making weird noises. If the patch is still working there’s no need to replace at this point. The mechanic is in there for a radiator replacement, not an exhaust leak.

I’ve got a patch like that on the header of my old truck, because just try finding an exhaust manifold for a 1988 Mitsubishi pickup. I patched the crack something like 4 years ago and it’s still doing fine. I’m not going to worry about it until the patch fails, and even then I’ll probably patch it again before I start thinking about trying harder to find a replacement part.

Some welders are pretty handy at welding cast iron. I had a crack in the exhaust manifold on my Corvette and it was welded with no future issues. I would have done it but I flat suck as a welder.

I’m with 'stang. Clearly visible crack. If you can come up with the money replace it. You may need to take the manifold off to get the dang radiator off. If you had to remove the manifold to replace the radiator it would be a shame to not replace it. However, with the built in cat that could be really pricey. You gotta do something about that crack though or you’ll end up sucking fumes in through the a/c - heat vents.

Got it. Thank you

I’m not going to worry about it until the patch fails,

You’ve got a patch on your header, where the patching material is gone and the crack is clearly visible? I think your situation is different than the OP’s

Just because I’m in there for a radiator replacement doesn’t mean that I’m not going to point out critical repairs for life-threatening conditions. If a vehicle was brought in to replace a ball joint, and I notice that the brake pads are worn down to the backing plate, you can bet your butt that I’m going to insist that the owner get new brake pads before that car leaves my shop.

I would avoid trying to patch that cracked manifold because if my patch fails the customer would then expect me to correctly repair the problem for free which would be to replace the bad part along with the gaskets and whatever bolts break in the process. Smart mechanics run from such traps.

If the crack isn’t making noise, it’s not leaking. A cracked header that’s leaking sounds like an old Model T. It’s pretty distinctive. I’m not saying don’t check it out. I’m saying it’s not automatic replacement when a header cracks provided you make sure it’s not leaking, especially if it’s difficult to find a replacement part. And sometimes patching or welding it is perfectly fine.

What are folks’ experiences with welding cracks like this on an exhaust header? I wouldn’t weld one that’s cracked through (into 2 pieces), but this kind of crack would seem to be a good candidate for a weld repair.

If the crack isn’t making noise, it’s not leaking.

It may only be making noise when it’s cold…as it warms up the metal expands and closes the crack. It won’t take long.

What are folks’ experiences with welding cracks like this on an exhaust header?

I’ve done a few over the years. From what I can see, the crack hasn’t progressed into the threaded boss yet so it’s a candidate. Keys are to drill holes at the two ends of the crack to stress relieve it prior to welding and to pre-heat the cast iron prior to welding. Considering location, might even do it on the car!

I have a brand new exhaust manifold just delivered yesterday for my truck. I’m replacing it because; it doesn’t have an integral cat so the replacement part is relatively inexpensive, it’s brand new and not going to go sproing like the old one is likely to do when it’s unbolted, it comes with a new heat shield (old one toast), new header bolts all around and a donut & manifold gasket set. But if it had a $500 or more cat hanging off the backside, I’d be more inclined to save it…

As I mentioned earlier. I had a crack welded on my Corvette right side exh. manifold and it never gave a problem.

The welder did it in the car in 5 minutes and it was the best 20 bucks I ever spent.

To @shadowfax’s comment. The OP didn’t say it was leaking or making noise but we don’t know if they even would recognize that noise as such. Someone put sealer on it because there was a crack or maybe it was making noise or both. We just don’t know.

I think I’d try and braze the crack with nickel brazing rod mostly because I’m not that good a welder and a crack like that seems to be begging for brazing.

To weld cast iron requires a cast iron welding rod and an arc welder. Along with special steps if you want the weld to last.

That exhaust manifold is stainless steel.

Then it’s going to require a TIG welder.

I don’t think so… Somebody stick a magnet to it! Maybe 400 series stainless which is magnetic with low nickel content. So might weld like regular steel?

OP, if you do have to wind up replacing it, ask for the old part. The catalytic converter will have scrap value. I had to replace a similar one on my wife’s Toyota and I sold the old part for $80.