RPM Pickup at the Plug Wire

At idle, the car I’m working on feels like it’s occasionally missing on a cylinder; you can feel a miss rhythm in its idle.

Not looking for help on the solution, suspect injectors, I’m looking for opinions on RPM pickup in the wires.

I have an analog Craftsman engine analyzer from the 1980’s. I thought I could use it to monitor the RPM at each wire and see if one of the cylinders wasn’t sparking correctly.

Dashboard RPM was ~700. One at a time, I put the magnet clamp on each wire, here’s the results.

What is going on…can you explain these numbers?

Also, I did the same test on another car that wasn’t having an issue and the results were very similar…I don’t understand.

I think you have to have a higher priced piece of equipment that can display the wave lengths whatever they are called and the look of the waves, like an oscilloscope (sp). One mechanic had a scope on my car years ago and could pretty much analyze each cylinder.

I’ve got a couple cheap spark testers and all it can really show is if there is good spark or not when turning the engine over. Once it starts they all look the same.

I have not used a craftsman analyzer in 40 years. I just threw the one I had sitting on the garage shelf out 6 months ago when I moved. but if you still have that I am guessing you still have a timing light. years ago as a teen, I would put the timing light clamp on each spark plug wire and look at the light to see which wire was bad.
as far as the difference in RPMs, sorry I am not really sure.

while thinking about this, you are putting the clamp on the spark plug wires. you are measuring the spark pulses coming from the coil. if this unknown engine has 2 coil packs 1 for 2 cylinders. then one of the coils could be going bad. this is probably why numbers 1 and 3 cylinders are basically the same and 2 and 4 are the same.

I’ve used a lab o’scope to monitor spark plug current pulses, sort of similar to what you’re doing. Be sure to convert the individual spark plug pulse rate to the actual engine rpm. An individual spark plug fires only every other crankshaft revolution (compressions stroke fires, exhaust stroke doesn’t fire) in most engines. Also the signal shape can vary somewhat cylinder to cylinder. If your gadget has electronics that covert the pulses to rpm, it might be triggering twice on some cylinders and once on the others, just b/c the current wave-shape is different.

Best solution is to look at the actual waveform on a lab o’scope trace & use the o’scope time base for the rpm conversion, rather than relying on another circuit to convert the pulses to rpm.
Another advance of this latter method if the engine uses a conventional distributor, you can probe the common high voltage wire (the one in the center of the distributor) and see the pulse occur in time sequence on the same o-scope trace. Differences cylinder to cylinder would be more apparent.

If you don’t have a lab o’scope, there’s hand-held versions available new for reasonable prices, and you could do what I did, buy a used one. Mine cost $50 at a local flea market.

used a lab o’scope to

Did you use the old Snap On ignition analyzer called the Anal-O-Scope? 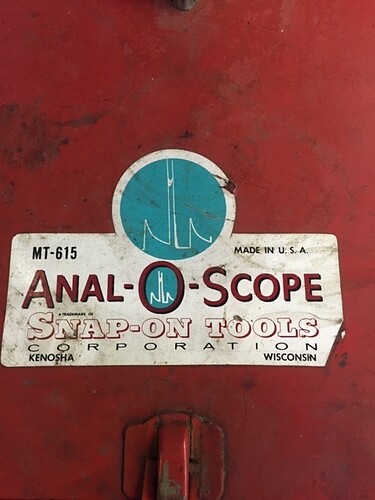 An individual spark plug fires only every other crankshaft revolution (compressions stroke fires, exhaust stroke doesn’t fire) in most engines.

Heck even your old lawnmower fires the sparkplug on the exhaust stroke.

Heck even your old lawnmower fires the sparkplug on the exhaust stroke.

I suspect the RPM pickup tool is sensing the Voltage from an another spark plug wire and adding them together. The tool might need adjustment or it could be going bad. I had the same issue with one of those $10 Chinese LCD screen hour and RPM meters where you wrap the wire around a spark plug wire.

What? I’ve got the $30 Briggs hour meter with the wire wrapped around the plug wire on my snow blower. Seems pretty accurate. Got the regular hour meter on my mower and just turns on whenever the key is on I guess.

Did you use the old Snap On ignition analyze

Only Snap On tool I have is a pair of slip joint pliers I found laying in the gutter. They really are better than my cheapo versions, even though they look nearly exactly the same. Better balance, and jaws seem to grab hold better.

As for what I use for scope engine analysis, just a common-place engineering lab scope, 20 MHz version.

Had to chuckle over the name of that Snap On gadget in your photo. Reminds me of the time I was presented w/a project (just after joining company) at a tech company, it was for analyzing the output of an instrument. Title of my project: Anal-Output … lol …

When I worked in the big city I used to like to walk through the surplus stores. Had a lot of electronic stuff. I probably walked by a scope thinking it was a submarine radar device or something. Wouldnt have known what to do with it anyway. Coulda hurt myself.

You sure that scope wasn’t produced by “strap-on tools”?

Im sorry, i know im bad, but I couldn’t resist.

You sure that scope wasn’t produced by “strap-on tools”?

I would tell you to act your age, but I suppose at your age you have seen it all!

I dont know how to act my age. Ive never been this old before!

I understand/agree with what you say.

As I said in the original post, I jumped over to the another vehicle and had similar results…very odd, can’t wrap my head around it.

If the engine is idling at 700 rpm, I would think each set of 2 cylinders would fire 350 times per minute.

Unless someone can really explain, just going to chalk it up to being a bad idea to use 1980’s analog equipment on a fuel injected computer controlled vehicle.

What kind of car/engine is this?

Probably something like that. I’d guess not so much about fuel-injection, but the computer controlled ignition system is probably confusing your equipment’s pulse to rpm measurement, which was designed expecting a single coil w/ distributor. Probably double-triggering.

Another possibility, maybe already mentioned above, but if engine uses camshaft sensor to decide among compression/exhaust, if that wasn’t working correctly, engine computer may fire spark on both compression and exhaust just to keep the car running.

The Camshaft sensor was swollen and cracked; it was replaced. The Crankshaft sensor looked ok, replaced it anyway as they’re cheap and it was 20 years old.

RPM check was done before and after replacement, made no difference.

If you remain curious about the rpm issue, one idea, pretty easy to tell if one spark plug is firing twice as fast as the other during cranking by connecting to spare plug & watching the spark occur at the tip.