Hello just purchased a 2004 Toyota Camry and noticed the airbag light. Got a B1900 code from our scanner. Description is “short in p-t squib right hand circuit”. Anyone have experience with such a code ? Thanks in advance !

The squib is the igniter for the gas generator in the airbag. The B1900 code is the driver’s side airbag.

It may be a broken wire through the clockspring, it might be the airbag itself. Checking continuity from the SRS controller and the driver’s airbag is where I’d start. Disconnect the battery before you do anything and let it sit overnight so there is no possibility of deploying the airbag when you remove it.

Inspect the wiring to the seat belt retractor for damage. Inspect the pertensioner, it may have been deployed in a collision and wasn’t replaced.

Thanks for the location (driver’s side)! The seller says the car was in an accident and the front bumper cover and right front quarter panel were replaced. Says he “believes” the airbags did not deploy. So we pulled the SRS Control Module and sent it to one of these online companies for a “reset”. Of course, the online company says they can clear accident data and reset the module. But Toyota (and some Toyota experts) believe that the module, if it was activated during the crash, must be replaced…

Thanks Nevada. The driver’s side seat belt appears to be in good working order. They pull out and retract without any issues. We will look into the wiring if the SRS Control Module “reset” fails to work. You also mentioned deployment of the pretensioner-is there any way to know if it was in fact deployed in the accident? And if deployed, must it be replaced ?

If the pretensioner was deployed it needs replaced.

Disconnect the connector from the driver side seat belt pretensioner and see if the fault changes from “short” to “open circuit”. If the pretensioner is the problem the seat belt must be replaced.

Hi Nevada, work slowdown while we’re waiting for an online company to clear, reset, and ship back the 04 Camry SRS Control Module. Just noticed you mentioned the B1900 fault is “(LH) circuit”. But our code reader came up with RH circuit. Mustangman mentioned Driver’s Side but wondering do we all agree the location of the fault is the Driver’s Side?

The Toyota service manual shows B1900 to be for the drivers side, B1905 is for the passenger side.

I don’t see any value in having a company “reset” the airbag control module, there is nothing to reset. After the circuit is repaired the warning light will go out, the fault will remain stored in the module until the faults are erased but that doesn’t pose a problem for the system.

always had impression this site was for non-pros. joe blow working on his own car. usually the best route is to not buy a rebuilt or salvage. since many parts are uh, overlooked. if i buy a crash car and the airbag light is on i usually pass. if i buy car with intents to flip it than maybe i go forward. thats my opinion. everybody has one

Thanks for the confirmation on B1900 being driver’s side. We spent a lot of time going after the front (passenger side) impact sensor (under the headlight on the Camry) thinking that’s where the accident was so it’s gotta be that sensor. Swapped it out w/one from the salvage yard and the airbag light remained. Then found a B1900 fault guide online which gave us 3 locations: Floor Wire, Driver’s Side Front Pretensioner Squib, Center Airbag Censor. Since the belts looked good we skipped over the floor wire and front pretensioner and instead pulled he SRS control module (which I assume is the Center Airbag Censor). Reason we shipped the module for a clear/reset is because we thought once the SRS control module is triggered it cannot be reset w/a scanner. That is, the airbag light will stay lit and the control module components get damaged. So we went with an online company that claims they can clear/reset and rebuild the control module.

We are not pros, the title is neither rebuilt nor salvage and the car is for me to keep, not for a flip. Had we recognized the airbag light, we would not have purchased it. Obviously, the seller did not bring it to our attention. Not sure where you got any of the above ideas.

Hey guys thanks again for all the help! As Nevada expected, getting the control module reset did not get rid of the airbag light. So we tried a couple replacement seat belts but they also failed to extinguish the airbag light. Then started looking at the yellow floor wire connector to the seat belt. The connector was missing its black “claw” which I believe helps squeeze down for a tight connection. Replaced the yellow floor wire connector, turned the ignition key to on, and the airbag light went out. Then cleared the stored code with our scanner.

Something useful I learned while needlessly removing and installing new seat belt retractors/pretensioners: simply ohm the belt and if you get a steady 2-3 ohms your belt is good. Only catch (we learned the hard way) is you must first separate the shorting bar from the pins to get a proper reading.

Much Thanks for the followup post with the solution! Now everyone who reads this string of posts can learn something!

The connector was missing its black “claw”

The release pin in the middle of the squib connector is necessary.
When the center pin is pulled out it allows the shorting pins to contact the squib connector. This is a safety measure so that static electricity can’t set off the unit while it is unplugged.

Inserting the center pin holds back the shorting pins. 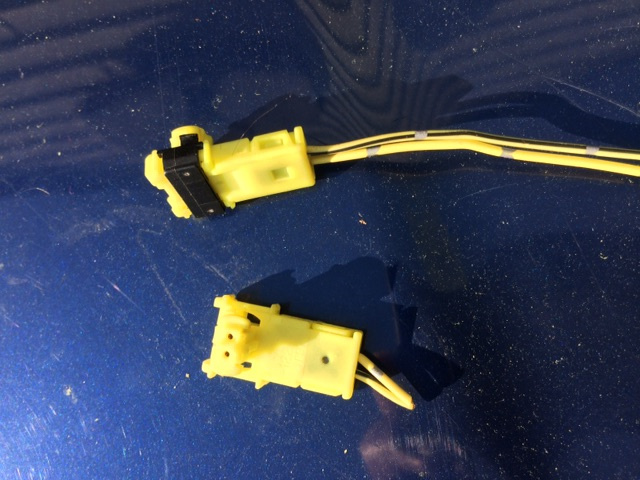