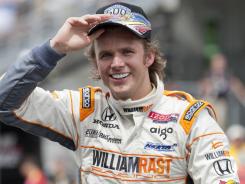 Racing is always dangerous. That’s part if the fascination we all have with it. I hope he didn’t live long after the accident occurred. My condolences to Mrs. Weldon and their sons, who are probably too young to ever remember Daddy.

On a happier note, Indy Car will be back in Baltimore next Labor Day, as will the American Lemans Series.

I was watching as well. I figured that the worst had happened when they called all the drivers for a meeting. Very unfortunate, things were looking up for Dan, he was poised for a great 2012 season taking over for Dancia Patrick in the 7 car.

I had the race on TV, but was surfing the net for a bit, when I turned my head just in time to see the crash unfold. It reminded me of those horrible crashes at Indy back in the day. Some cars were completely engulfed in flame, but the extinguishing systems put the fire out in one or two seconds, it seemed. That gave me false hope that there had been no fatalities.

I had been hoping Will power would overtake Dario Franchitti in today’s final race, & take the championship. Now it’s the last thing on my mind. But yes, the drivers all know the risk they take.

On the other hand, if you feel that people are willing to risk death for your racing ticket price, then there is no need to feel regret but I have chosen the former view.

I don’t think it has anything to do with that. Those guys are doing what they love to do. I’ve put cars on a track before myself, and I can tell you it is fun as hell. Nothing like it. They’d race with or without fans if they could (and in fact, that’s exactly how NASCAR got started. Rum runners racing their cars in their off time, and it started attracting spectators, but it was never about racing for fame or cash in the beginning).

One could argue, I suppose, that major race tracks, whether F1, Nascar, Moto GP, or IRL, with the cream of the crop of professional drivers racing on them, are safer than public highways. On the other hand, some of the drivers interviewed today, after the crash had happened, but before the extent of injuries was known, expressed incredulity that so many cars had been entered on such a short (1.5 mi), and fast (222MPH straightaway speed) course.

It’s so rare nowadays to see a racing fatality, it’s hard to think that that’s the reason people watch the various racing series. Compare that scenario to the Formula 1 scene in the 60’s & 70’s. Those guys died like flies. Still, one death is one too many for sure.

I get asked very often how come I love cars but never watch races on TV. Every time I turn the channel to a race, I find myself holding my breath.

Ernest Hemingway said there are only two true sports:
bullfighting and car racing

It’s very tragic and made more so by the fact that he leaves a wife and I think a couple of kids behind. I was really pulling for Wheldon on his future plans.

A casual acquaintance and older brother of a long time friend of mine died at the track here about a dozen years ago in a racing accident. In this case it was particularly brutal because he was trapped in a car while conscious and burned alive.
It’s a very tough thing to even think about.

I wonder which of the many drivers who felt it was a bad idea to put so many cars at such a speed on that track…
was first to stand up at the post-meeting and say
"I told you so."

I was watching that race when it happened and you could tell from the overall mood that something bigger was going on.
No drivers seemed to be chomping at the bit to get the race restarted. All of them seemed reserved and patient.

I think they were all in shock. They were right there with him racing him just moments before. Not a single driver wasn’t in that mess somewhere, either involved or barely staying uninvolved.

I heard an interview with one F1 driver who refused to race that race. He said there were way too many cars for a track that size. I’m inclined to think the sanctioning bodies will be considering some serious rules changes. I hope they limit the number of cars allowed, and perhaps raise the height of the energy absorbing barrier and don’t place further technical restrictions on the cars. Technical restrictions would just be temporary. Technology would overcome them and speeds would creep back up.

Other racing leagues restrict the top speed of their cars. NASCAR changes the restrictor plates for different race tracks. F1 has done it by reducing the RPMs twice since 2006. I don’t hear many people complain that racing is all that different than it used to be. And as technology encroaches on earlier speeds, further restrictions can be imposed as they have been in NHRA. Think of it as new puzzles to solve.

The biggest problem facing F1 drivers is that they NEED to go that fast to be able to make those turns. If they go too slow, they won’t have enough downforce to make the turn. Next year, every driver in the IndyCar Series will be driving the new Dallara chassis. But one pilot already had a wealth of experience in the new car: the late Dan Wheldon.

A long but interesting article about the Indy race car organization appeared in this Sunday’s edition of the New York Times.