I’ve heard a rationale for re-using the original coil springs when replacing front struts. The claim made was that new springs would be stiffer than the tired old ones, thus slightly raising the front of the car compared to where it had been on the old “weaker” springs.

I know that compressing the springs in order to get them off the old strut is difficult, requiring a special compressor, and probably involves some risk to the inexperienced DIYer. Thus, opting for “quick struts” is often the best option. Clearly, a lot of cars on the road ride on quick struts (with new springs).

Without any prior experience, I would guess (and it’s only a guess) that there may well be a slight difference caused by the difference of old springs vs new. But is there any detectable difference in all aspects of driving – meaning alignment, handling, safety? Or is the difference negligible and insignificant?

Who has an opinion on this?

I just used Monroe quick struts and there was no difference in height or ride. I have struggled before with changing springs and it is dangerouse and time consuming. Plus the upper mount. No question go with the complete strut.

The springs don’t lose stiffness if they are not rusty. They can corrode, sag and break. Modern springs don’t last forever nor do strut mounts and steer bearings.

You can rent good spring compressors for free from local parts stores.

Quick struts are far easier for a DIYer to replace. But… the manufacturer always designs as many as 5 or more springs for the various ways you can build the car. The springs are different lengths for lighter or heavier options so the headlight height meets federal requirements. Quick struts sell you one so the car might end up a little high or low.

You should get an alignment for that reason but it is no worse than factory.

As far as ride…the strut has more effect…and chances are pretty good you are not sensitive enough to notice much difference.

I also did “quick struts” and “spring compression” when quick struts weren’t available… no noticable difference.

The Quick Struts were faster to install (Duh) and has all new parts so for a few bucks more, easy decision.
But if QS aren’t available, using reasonable safety precautions and Common Sense (whch seems to be becoming more UnCommon), spring compression is an alternative…

Here are my experiences with my personal vehicles

On one of my cars, I replaced worn out struts, but reused the old springs and mounts . . . a few months later, one of the springs snapped, so I had to pretty much do the whole job again, just to replace the springs

On another car, I installed KYQ “quick struts” and the car did indeed have a slightly higher stance. But as I spend most of my time driving the car, as opposed to looking at it, I quickly got used to it

A decent spring compressor isn’t that cheap . . . and the ones that are available to loan out at the parts stores aren’t always the best . . . so I’m not sure if it’s worth it for a diy guy to just do the struts and reuse the springs and mounts

Re -using the springs sounds like a way to lose a finger or even a complete hand .

It is if you don’t pay attention…

Front struts are compressed quite a bit, rears not so much. Compressed springs have stored energy that can do damage if pointed at breakable things…like your hand! Treat them with respect and stay out of their way and all will be well.

I used Quick struts, not one of the more famous ones, Unity brand and the car rode a bit higher probably for a few thousand miles. Didn’t notice any thing negative with the ride. This car got all four new sides and before that was bouncing all over the place, so anything would had been an improvement. The new struts settled after a while or maybe I stopped paying attention,

Thanks everyone for responses.

I had never considered swapping the springs myself. Instead, I am deciding between paying for strut installation at a shop which reinstalls the old springs, or installing quick struts myself, which I have done once before.

I wanted perspective on the potential for issues resulting from changes created by new springs raising the front of the vehicle. From responses thus far, seems any difference is negligible, but if anyone has a different view, I’m still undecided.

I still need to investigate the difficulty of accessing the top of the strut, as there’s a few things in the way, which wasn’t a factor on the vehicle I did this job previously.

Thanks @galant.
My car isn’t bouncing, but I have been hearing ugly noises from what I believe is the upper bearing. Betting these are original struts, and best estimate of mileage on this ride is north of 300k, so no surprise that a bearing is at end-of-life.

The noise occurs when turning the wheel, but almost never in ordinary around town driving. But when I’m on a very twisty road, even as little as a half mile at low speed as I was last week in a small campground situated on a forested slope, the noise is concerning. So one way or another, I’ll retire the struts asap.

I am deciding between paying for strut installation at a shop which reinstalls the old springs, or installing quick struts myself, which I have done once before.

I have to question why a shop would want to reuse old springs . If there is a warranty why not have all new parts .

I’ll just add that I bought the suspension kit from rock that had both front and rear all together. Hearing spring issues before, I measured the diameter and height before installation. No difference from the original equipment, but I suppose brands and applications may differ.

I have two sets of the screw type spring compressors and have had to use three in the past due to the slope if the springs. Not something I wish to do again. The commercial compressors would be a lot better. Then I’ve had to do the same thing to change the upper mounts again. They are a wear item.

That’s the premise I mentioned in the first line of my post. This one shop cautioned that using new springs would cause the front of the car to ride a bit higher, so they evidently prefer to re-use the original springs.

I was not advocating that approach, but I understood their reasoning. I posted here to get other opinions.

This one shop cautioned that using new springs would cause the front of the car to ride a bit higher, so they evidently prefer to re-use the original springs.

This is what may have happened at that shop . . .

I personally don’t think it’s a good idea for that shop to recommend just replacing the strut. If they’re reusing the old spring, I’m guessing they’re also reusing the old strut mounts, which can also go bad . . . and then you’re pretty much doing the whole job again

I gotta go but my concern was more the actual diameter of the wire used compared to oem, but they were identical. If the car is higher, one thing to consider if if it was just restored to the original height.

If the car is higher, one thing to consider if if it was just restored to the original height.

I would think that would be what would happen.

One option to consider if you prefer to keep the original springs: Ask the staff at the parts store if they’ll install a new damper with your original springs, you bring the old strut ass’y to the store. My parts store has a spring compressor in their back-shop & offers that service, not overly expensive.

I always reuse the springs. Many struts/shocks that I replace are only 5 years old and no rust in the desert. My cars are more than 20 years old and do not have sagging suspensions.

As for out of warranty repairs, how much do you want to pay for suspension repairs?
Last week I replaced four shock absorbers on a 1996 Lexus, how much would four new springs add to the bill? 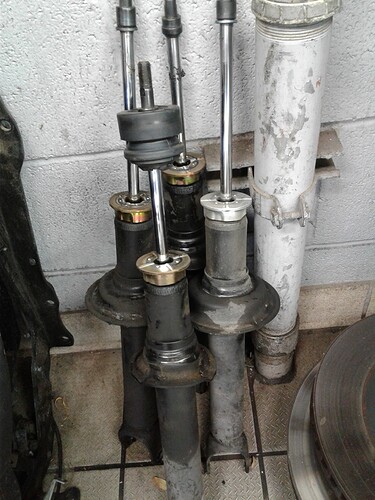