Every person I talk to has called it a bendix.

When I was a kid, the old guys in my town called it a “Bendax”.
They also said that they sometimes had “corrode” on their battery, they referred to Kerosene as “Karosene”, and they also talked about problems related to “moorestore” (translation “moisture”) with their ignition wires.

The bottom line is that it is frequently a good idea to ignore “common wisdom” when it comes to car problems.

If I remember right wasn’t there a coaster brake on bikes back in the 50s and 60s called a bendix?

the old guys in my town called it a “Bendax”.

I follow you on that one. As a little kid whenever I’d ride with my dad in his truck he’d talk about the truck’s bendix. “I think I can hear the bendix.” “I think there may be a problem with the bendix.” “The bendix might be acting up.”

I never noticed any unusual sound; still I don’t think there was single ride he didn’t mention the bendix … lol … I finally surmised it had something to do w/the starter motor, but never got any further explanation than that. No explanation was needed actually, as the truck’s bendix never failed. Not a single time.

He was also unusually obsessed with the jets in the carburetor for some reason. Carburetors are an imperfect way to obtain the exactly correct fuel/air mixture, so they tend to go lean & have dead spots at certain speeds and driving conditions. I presume this is what my dad was noticing. While the truck was under warranty he took it to the Ford Dealership a half dozen times and had them change the jet size. The dealership guy never complained, I guess they offered that as a free warranty service. I never noticed any difference in the way the truck drove. But I was just a kid, not driving it.

If this overrunning clutch slips when starting the engine, you will only hear the starter motor spin. 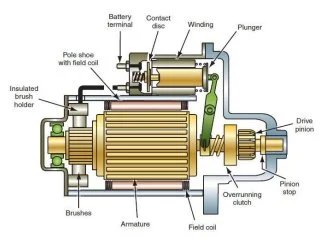 I had that exact problem immediately after installing a no-name aftermarket starter motor on my Corolla. Failed right out of the box. The solution was to take it back and get a Denso unit instead. The manager at the parts department was trying to blame the staff member who sold the first unit to me, claiming it was the wrong part. Meanwhile I was explaining the part seemed like it correct version, matched up to the other one, it was just broken inside somewhere. I think the staff guy may have unfairly lost his job over that one b/c I never saw him again. He was somewhat of a car-novice compared to the other staff guys though.