I saw this in U.S.A Today, today. What’s up with this?
Looks Like The Photo Holds A Clue.

The oil change may be about to endure a change of its own.

Enclosed fuel cell-like oil pan, maybe? in/out valved snap connections on top, quick-release two hoses and remove the oil cell, replace it with a fresh one, snap the connections back, done? Then take the old oil cell and dump the oil, fill it, and give it to the next customer.

Could also probably do it by making a larger drain hole with a quick-release fitting and hooking it up to a machine with a powerful suction pump. Suck the old oil out, remove the hose, then pump the new oil in with basically a gas pump?

Dry sump oil system reservoir with quick connect dry-break fittings. I can’t see the value to the manufacturer by doing this. I think, IMHO, that this is an answer to a question no one asked.

Just HOW does this reduce carbon emissions?

@Mustangman
"I can’t see the value to the manufacturer by doing this."

How about some value in marketing vehicles to busy people who hate wasting time on oil changes or to the DIY consumers? No?

Based on the fact that we are no longer seeing the “no scheduled maintenance until 100k miles” ads (remember the one where they acted like you might as well weld the hood closed?) I suspect customers don’t care.

Those of us who maintain our cars view the oil change service as an opportunity to sneak a donut at the shop without getting fussed at by our significant-others. Those who do not maintain their cars won’t take it in whether it takes 20 or 2 minutes because I suspect for a lot of them it’s not the time investment, but the perceived waste of money – “I just spent $30 on an oil change and have nothing tangible in my hands to show for it, so why would I do that again?”

Where the driver will see a benefit — and it's quite significant — is time.

Translation: It will cost more. I agree; it’s a dry-sump system with removable reservoir.

I suspect a quick connect for an oil flush same as a trans flush. Maybe it is time we all reassess what we are doing if we need to be so concerned about spending an extra 20 minutes once every three months or so. I multi task. Oil changes are a time to take a look under and around the car.

This article is the newspaper equivalent of a political speech - lots of promises, no idea on how it works. I wish we could ask Tom and Ray their opinion on this; I think I know the answer - Booooogus!

@boilerengtn
"This article is the newspaper equivalent of a political speech - lots of promises, no idea on how it works."
You’re right, it leaves a lot of unanswered questions. The reporter did say, "The company did not reveal many details about the technology, which it said also offers environmental benefits."
We’ll learn more as it gets closer to launch.

Personally, I think it’s about time manufacturers start to consider easier/better routine maintenance technology. Sliced bread, cassette/cartridge audio tapes, ball point pens, microwave ovens, etcetera, were ideas to make life a little easier that have become a part of our everyday lives that would be tough to give up.

If there’s an easier, better (cheaper?) way of changing oil, then I’m all in… at least having a look.

Rather than toasters being easier to repair or oil changes made easier, I think the direction has been to make the toaster disposable and extend oil changes. When my dad retired, he’d hang around the Caddy garage and would pick up and deliver cars to customers. It was not unusual at all to just pick the car up, have the oil changed and service it, and bring it back with no customer intervention at all except signing for the work. What could be easier than that?

How about some value in marketing vehicles to busy people who hate wasting time on oil changes or to the DIY consumers? No?

@common sense answer That is the value being pushed by Castrol but that rarely seems to be a concern to the manufacturer. Compare the time value to the added cost of a dry-sump system with the reduced reliability of quick-connects to the oil lines.

The car buyer will pay for that additional hardware to save 20 minutes every 7500 miles. Consider 20 oil changes over 150K miles, that amounts to 6.66 hours saved. If the owner makes $30 an hour, that’s $200. I’d bet you’d pay at least that for the additional hardware. Net gain, zero.

I don’t see the time savings. By the time a typical customer drives to the lube shop, drops the car off, fills out the paperwork, gets a cup of overcooked coffee, takes a seat in the waiting room, signs off on the bill (and listens to all the “upsell” service)…30 minutes have been taken from the customer’s day. The “time and motion” portion of changing the oil is maybe 4 minutes?

So, where’s the time savings?

@meanjoe75fan
I can see this scenario…
Pull up to ____________ (fill in the blank with favorite national chain auto parts store). Some guy or gal, former Seven-Eleven clerk, hops over the counter and follows you out to change your oil (snaps in a new cartridge), installs wiper blades, reads your DTCs, etcetera.

I’m not saying everybody would go for this, heck I wouldn’t let them install a battery or wiper blades on my vehicles, but many folks would.

Always owning and operating six or seven cars, I’d take advantage of an easier, less messy, oil change procedure. Time isn’t necessarily an issue, but it is when it hits -20F in my driveway.

This is all just wild speculation until more details unfold. I could be off-base. We’ll see.

Here’s a much better coverage article including pics… 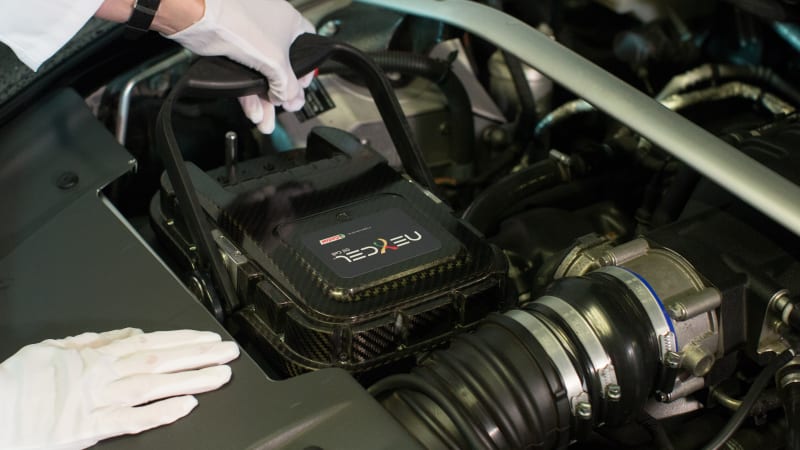 Castrol Nexcel is an oil change in a box

Castrol thinks it can revolutionize oil changes with the Nexcel that puts everything in a single unit that people can switch out in just 90 seconds. It premieres on the track-only Aston Martin Vulcan and may hit the street in a few years, too.

Now what will the oil change place strip if they do not have plugs??

This Could Be Handy In Some Of These Oil Guzzling Cars. Several Spare Cartridges Could Be Kept In The Trunk (where a spare tire was in the old days).

As soon as the “oil Light” comes on at a traffic light, the owner jumps out and snaps a new one in just in time for the green light!

This offers all sorts of possibilities…

So…it’ll be like printers: you can’t “add toner”; you need to install a (proprietary) “toner cartridge”!

Why don’t I see this as a positive?