So my wife has a 2016 jeep Cherokee with 80k miles. We had to bring it into Jeep to get a repair done( power take off). They said we needed to change the plugs and they recommended fuel injection cleaning. They asked if it was running a rough and to be honest it is a little bit. They wanted $1,100 to do the injectors and plugs. I was blown away. THey said I could change the plugs and the injectors would be $700. Still…wow. They said it’s a $50k machine that does the injector cleaning. I’m sure I need it done but just cant afford that now.
Is there something similar I can add/do myself that will help clean the injectors? Thanks a lot.

As to the rest, spark plugs may be due for a change, most manufacturers recommend around 100,000 miles, but Jeep might be earlier.
As far as fuel system, I would just try running some SeaFoam or Techron in the gas see if that helps.

The car was grinding when turning. They said it was the power take off and it was replaced.

Is the Check Engine light on?

What is the recommended interval for plugs in your owners manual?

It is extremely unlikely the injectors have failed at 80K. $700 for cleaning them is obscene. As suggested, add some Techron to the gas, and don’t return to this shady dealership.

A power takeoff unit is something generally found in farm and industrial equipment.

What is the recommended interval for plugs in your owners manual?

@mstrlucky74:
Unless there’s a problem you’re experiencing, you should be good for another 20K miles on the plugs.

I think maybe OP got scammed. Power takeoff, as I understand it, is something on work trucks that allow them to be attached to other equipment in such a manner that the truck engine will operate the other equipment, or that would use the truck’s electrical system to convert to AC power to operate power tools. I know that my '15 Cherokee Limited does not have this. It may have been an option on the '16, maybe the Trailhawk, but I’ve not heard of it.

When you look up a 2016 Cherokee on Rock Auto, and look up “Axle/Differential Assembly”

The call it a “Power Takeoff”

RockAuto ships auto parts and body parts from over 300 manufacturers to customers' doors worldwide, all at warehouse prices. Easy to use parts catalog.

They wanted $1,100 to do the injectors and plugs. I was blown away. THey said I could change the plugs and the injectors would be $700.

$700 to clean the fuel injectors? hmmm … injectors clogging on a 6 year old vehicle? That would be more than a little unusual imo. I think if I was presented with this issue myself, I’d say " just replace the spark plugs for $400". Then I do some test drives to decide if the new spark plugs solved the imperfect engine performance. If not, I’d try a dose of Techron injector cleaner in the gas tank, see what effect that had, before considering anything else. In any event it seems unlikely based on what you say the engine performance problem is caused by problematic fuel injectors.

The power transfer unit is the gear assembly used on front wheel drive transaxles to send power to the rear wheels. 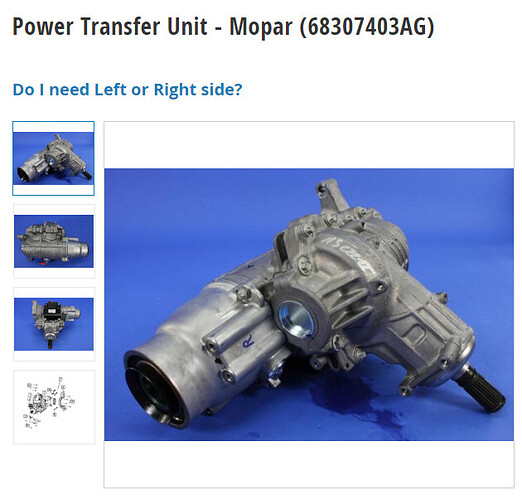 OP refers to “power take off”, not “power transfer unit”. Perhaps a miscommunication, but PTO usually means the gadget described by @Dakotaboy above, used to provide mechanical power input for an attached accessory. Used for something like an attached snow-blower etc. . Don’t know if a JGC even has that capability as an option or not. PTO’s more common for farm tractors than on-the-road vehicles. 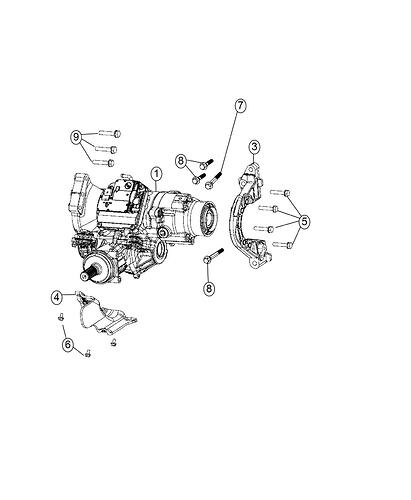 So the Jeep started making the noise again. THey misdiagnosed it and it wasn’t the power takeoff(or transfer) unit. I brought it back and they just called and said it’s the rear differential and it’s not covered under warranty. Car is a 2016. THey said it would cost $4000 plus tax. Unbelievable. Can’t afford this right now.

Consider getting a second opinion. For $4000 it would be worth the diagnostic fee at a good independent shop to see what it is an how much they would charge to fix it. See what the cost of a rebuilt or used differential would be versus a new one.

Plug lifespan is not a one size fits all arrangement. Plugs can certainly misfire at far less mileages than recommended and they may not set a diagnostic code.

There are many reasons why an engine could run rough. Engine compression low, vacuum leak, corrosion inside a coil boot, etc and even possibly the injectors. There is not enough info known and without car in hand no one knows. We don’t even know which engine you have. My assumption, right or wrong, is the V-6.

For 700 dollars I would run the fuel level down a bit and add some additive such as Sea Foam or Berryman B-12 to the fuel tank. My gut feeling is the fuel injectors are fine.

$4k for new rear differential? That sounds about right if entire rear axle needs to be replaced. On my truck, the working part of the differential is a separate part from the axle (termed a removable 3rd member configuration) and can be replaced while keeping the rest of the axle in place. If the only part that is being replaced is the third member, $4k sounds a little too much imo. A new third member for my truck in nodular iron runs maybe a little over $1000. Labor would make the job cost more, but not that much more. Maybe 1.5 hours labor to replace 3rd member.

Curious if it’s the rear differential why so I hear the noise on the front ?