…and goes with Carl Icahn’s buy-out offer instead: 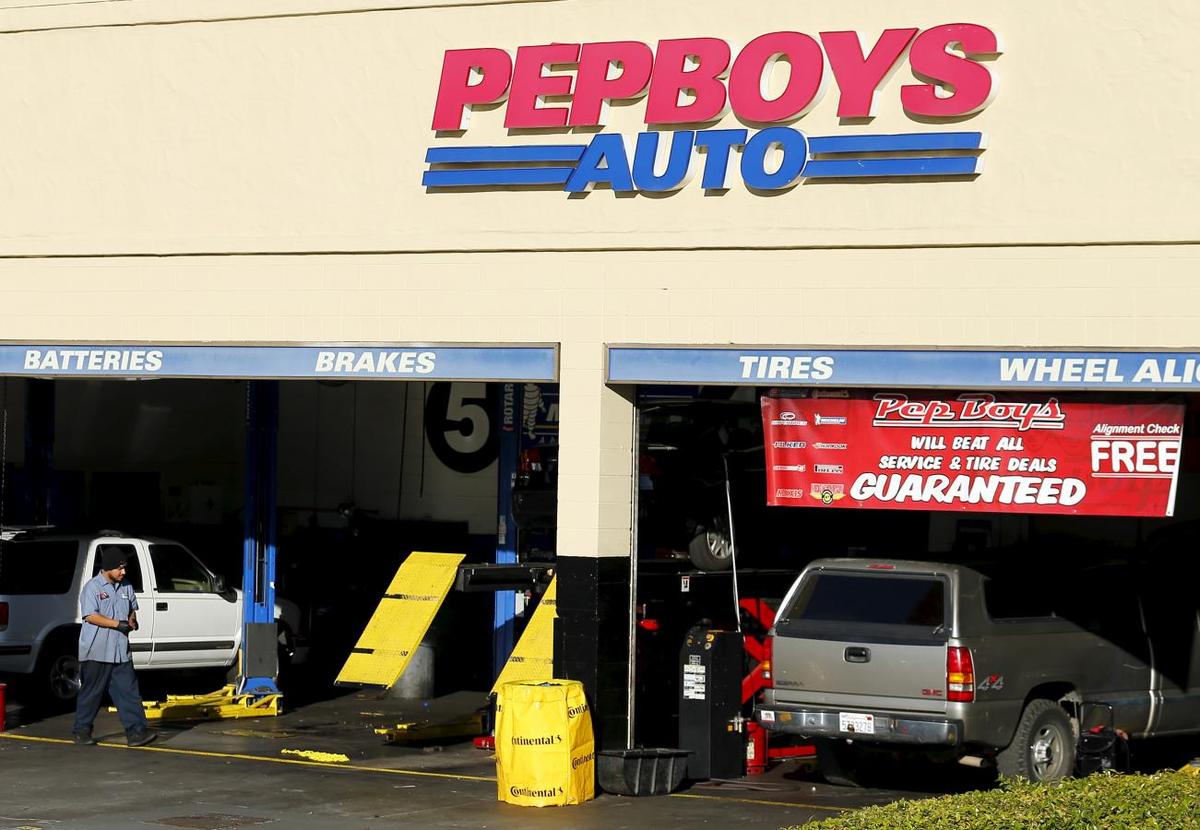 U.S. auto parts retailer Pep Boys - Manny, Moe & Jack said it planned to terminate its deal with Bridgestone Corp after its board determined that Carl Icahn's offer was a "superior proposal".

Last year, Icahn bought a fairly large Canadian auto parts chain (whose name I can’t recall), and I imagine that he is interested in achieving superior operating efficiencies by combining certain of its functions with those of Pep Boys.

Yeah I saw that. Interesting. I guess I’m a little misinformed. I didn’t know Firestone shops were owned by Japan. Ole Harvey and Henry must be rolling over in their graves.

I heard they are now asking Bridgestone to up their offer. Essentially a bidding game.

I have totally, completely, and absolutely lost track of who owns who.
But I still want my Bentley drop top… even if it is owned by VW.

"I have totally, completely, and absolutely lost track of who owns who. " Me too. I heard on CNBC today that Bridgestone upped their offer to $15.50 a share. Maybe they’'ll have a bidding war, who knows?

Yeah me too. That’s why I said I would be in favor of legislation mandating the ownership information being printed along with the company logos. Even though I’m not a fan of legislation, this is getting silly. Who knew who owns Keurig and B&D and Porter Cable and DeWalt, etc. I don’t even know if a Mazda is still a Ford or not. I’m pretty sure a Saab is not a GM anymore but gee whiz with all the holding companies and buying and selling, inquiring minds want to know. Maybe it would take a bigger box though: Firestone service centers, owned by Bridgestone, Firestone tires not owned by Bridgestone, etc. or maybe they do?

IMHO a regulation such as that would be a total waste of legislative energy. Nothing would change but the label. We already have too many regulations.

Full traceability serves an essential function for the FDA (GMP regs) and NASA hardware (NASA 5300.4), but sufficient traceability regulations already exists in the automotive industry to track down failures for recall purposes. It matters not who made the car. Just one man’s opinion, you understand. No disrespect meant.

I’d be happy if the tire industry would stop putting everything in code. Want to know the speed rating? The traction rating? The load rating? the wear rating? The date of manufacture? They’re all in code. Why couldn’t they be stated directly? Why should a tire say “S” instead of “112 mph max” etc.? Why put it all in codes?

Slightly off topic, but in regards to who is tied up with whom now I noted this past week that a small Oklahoma farm and ranch chain with about 35 stores (mostly OK with a few in TX, KS, and AR) are now Craftsman tool dealers.

Apparently Sears is going to spin off the Craftsman line into any place they can get a foothold.

Ace has been carrying Craftsman for a couple of years.

I agree that legislating disclosure of ownership is unnecessary. If you want to know who owns a company, their web site often carries that information. It can often be found on business data web sites.

Jt’s right, Craftsman products are sold at Ace Hardware stores in my area too. I don’t know if they “spun them off” or are simply entering into agreements to expand distribution, but things have definitely changed. “Spun them off” would to me suggest that Craftsman is no longer a part of Sears but an independent company that simply sells to Sears… and to Ace. But, then again, Sears is no longer Sears… they’re K-Mart now!!

Doesn’t surprise me that Sears would be trying to expand distribution channels for the Craftsman brand. At the rate they’re going, there won’t be any Sears stores left to buy them in in a few years. I wouldn’t be surprised to start seeing Kenmore appliances in Best Buy, Lowe’s etc soon if its not already being done. (I don’t go shopping very often).

The whole thing about what corporation owns who isn’t a new issue either. I vaguely remember back in the late 70’s or early 80’s my mother got involved with a group of mothers who were boycotting some corporation for selling tainted baby food in 3rd world countries. It was like unravelling a big cable knit sweater figuring out all the stuff not to buy / stores not to shop in, including a local restaurant that was a favorite haunt of my parents.

Its a lot easier today to figure out who owns who because of the internet.

Yes, I see Sears just trying to find additional outlets dor their name products as they close Sears and K-Mart stores for lack of business.

A good source for ‘who owns who’ info is Wikipedia.

Well the Hometime Sears stores are not Sears stores but are private franchises. They have evidently been getting out of the retail business for quite some time in favor of real estate I believe. I think there are also different lines of Craftsman-commercial and consumer. Last time I checked the price of a Craftsman wrench at Ace though, it was two or three times the price of the farm store. Don’t know how long that will last.

Sears has been in trouble for years… even before they were bought by K-Mart… who was bankrupt just a few years earlier.

I know there used to be different Craftsman lines… I used to get the “commercial” catalog. I don’t know if there still are.

I hope that whoever owns Craftsman tools now they keep the quality up. I always liked their hand tools. For “one time” tools that don’t need precision, the cheaper stuff is okay, but for anything that needs precision like a 12-pt box-end or a set of sockets, it’s worth the extra price. Snap-On and their competition are superior tools, but the prices are too hefty for this ol’ retiree. Craftsman are good quality at a price-point I can afford.

Sad to say, but it’s a case of one loser brand buying another

It really is sad, because I used to consider Sears a decent place to shop. They’ve been circling the drain so long now, I’m surprised they’re still around

K-mart, on the other hand, I don’t even remember ANY time when K-mart was a decent place to shop. If you want to be frustrated, not find what you want, bare shelves, stuff just strewn all over the floors, in the wrong location, etc., K-mart is the place to go

As far as tools for my garage at home go, I have many Craftsman sockets. I consider the impact sockets a very good bargain, especially during club saver days. But I don’t like their ratchets. Craftsman used to have a professional line of box end wrenches, which were full polish and made in USA. I don’t think the craftsman “professional” line even exists, anymore. Some of the tools have the same part , but aren’t labeled professional anymore, while some other tools have been discontinued

Just to keep this slightly car-related . . .

I do use some of those 1/2" drive craftsman impact sockets at work. A set of made in USA 1/2" drive deep impact sockets with lifetime warranty for about $50 . . . I think that’s what I paid, when they were on sale . . . is a pretty good bargain, IMO

you could probably buy a harbor fake set for less, but that’s not made in USA

Last time I was in a Kmart, it was neat and orderly though. It oughta have been, there were more employees than customers in there, AND they had a ‘Now Hiring’ sign on the door! Got to the cashier with 2 items, one of them scanned at the wrong price. Fortunately a manager was right there shooting the breeze with the cashier and he immediately vouched for the correct price. Then I had to play 20 questions with the cashier. "Would you like to sign up for our ‘rewards’ program? Would you like to apply for our credit card? Would you like to purchase an extended warranty for only $3 more? Would you like to make a donation to our ‘partner charity’? All of this for a $14 purchase. If I had exact change I would have grabbed my 2 items and bolted for the door! Come on lady, the purchase is over, may I leave the store now?

It really is sad, because I used to consider Sears a decent place to shop.

I was just at the Sears at the Salem mall this past week. They moved everything to the first floor. The second floor is now Dicks sporting goods. They really consolidated their merchandise. Tools and appliances didn’t loose any real-estate. But the whole men’s clothing section is smaller then our family room. Suits, Jackets, Jeans…all gone.

To keep it automotive…they have a separate building for auto repairs and parts (tires, batteries) that they are keeping open…which no one uses.

Ed, I had a similar experience at Kmart a few years ago. Wouldn’t take my credit card until I answered a bunch of questions. Never went back. And the store closed a bit later.