I have inherited this car that has been in the family since 1978. I noticed that there is not a ground wire connected to the GRD terminal on the back of the alternator. Only a wiring harness clip to hold the wiring harness in place.

Is it usual not to have a ground wire attached to that terminal? This unit has an external regulator, and the charging system is not working. I figured that I would start with the alternator before tackling the regulator. I opened the regulator and cleaned the brushes, which are almost new. I know the car has not been driven much for a long time, and in fact has been in storage for about 15 years.

Any help identifying a good quality regulator would also be appreciated. The one from the local parts store looked like cheap crap from a foreign country. Returned it before trying it out.

Rock Auto has several voltage regulator listed including ACDelco but they might all be manufactured in Asian countries by now.

Try summitracing.com. A quick search shows multiple alternators and a single voltage regulator for a 68 442.

Find 1968 OLDSMOBILE 442 Voltage Regulator and Rectifiers and get Free Shipping on Orders Over $99 at Summit Racing!

I don’t remember any alternators needing a ground wire. My thought is the alternator mounted to the bracket bolted to the engine would provide any needed ground connection. Are you talking about brushes in the alternator? Never took apart a separate regulator but would not think it has brushes.

I think this vehicle used a generator, not an alternator, and therefore it had a commutator and brushes. The regulator is just a relay to switch the exciter current and thus control the generator output.

Thanks to all of the replies. I suspected that the bolting to the engine might act as the ground but wanted to be sure.

And, yes Barkydog, I was talking about the brushes inside of the alternator, not the regulator.

While relatively simple, I’ll be learning a lot about older cars with this one.

Based upon my electronic version of the shop manual, this car does indeed have a generator and not an alternator, although they look similar (and I am not quite sure of the difference in function).

There seems to be a special instrument to test the output and I am not sure if they are readily available. I’ll keep investigating.

I’m surprised it would have a generator, Ford switched to alternators in 1965. Pictures on Rockauto look like alternators.

If the battery is being charged sufficiently, I think you are better off letting well enough alone.

It would be different if you were having problems, or that the nut vibrated off the post and the wire is just laying there.

That ground post could be only for purposes of bench testing.

Even my 1966 olds had an alternator not a generator. Although it may say generator on schematics, the schematics for my 2002 Camry calls it a generator, but we know different.

My 63 Galaxie had an alternator!

When you get into the 50’s, then you start questioning.

My '63 Grand Prix had an alternator. My '62 Pont Catalina had a generator. I was under the impression that all GMs went to alternators by '63.

I think all 50s cars had generators, My recollection is that the first alternators is saw were on 1960 Chrysler products. My Toyota owners manual call the alternator in my car a generator and that is technically correct.

Every alternator is an ac generator but a dc generator is not an alternator, thence the term by which we differentiate them.

I can’t help with the alternator problem, but the mention of the 442 brings back some fond memories. The last time I rode in a 442, it was 1967 I think, and Jimi Hendrix’s “All Along the Watchtower” was being played full blast. I can remember it to that level of detail. If I recall correctly that car had a huge intake manifold vacuum gauge on the dash, and when the driver stepped on the gas, that gauge would move big time. I wasn’t old enough to drive then, but it was fun to watch that gauge, and listen to the sound of the exhaust.

After looking at my original post, I guess I should have been more thorough.

First, it may have an alternator, and not a generator. I was just going by the discussion in the shop manual. I have never seen a generator, as far as I know, and this unit looks like all of the other alternators I have changed.

After finally getting the car out of storage and into my garage, I began to tinker with it. I noticed that the battery seems weak despite being new. I performed what seemed to be a simple test, which was to charge it up, test the voltage across the terminals with a multimeter, and then start the engine and re-test the voltage. I am under the impression that if the charging system is working, the voltage with the car running should be somewhere in the 14 Volt range, and with the car not running, somewhere around 12V. It was the same (app 12.3V) under both scenarios.

When removing the alternator, I noticed that there was not a ground wire connected to the GRD terminal. The wiring diagram suggests that there should be one. However, I suspect this is not the case as it is probably grounded by the bolts attaching it to the bracket and to the engine.

There is continuity in the wires going from the alternator to the regulator (some via the horn relay), so I plan to re-attach the alternator after having cleaned it up and then start it again and see if anything has changed.

If not, I’ll probably change the alternator and regulator since they are old anyhow, and I don’t want to mess around. I really just want to get it drivable and start to enjoy it.

Thanks for your advice, everyone, and I’m happy to have any more advice you are willing to offer.

If anyone is knowledgeable about these older cars and lives in the Indianapolis area, and would like to stop over and have a look, let me know. We’ll figure out how to work out the logistics.

I can’t speak to the 442 battery and alternator design, but my Corolla battery measures about 12.5 volts when fully charged and the engine is off. That would be the case for example if I measured it the next morning after a long freeway drive the day before. If I measure the battery immediately after the drive, but with the engine off it would measure about 12.7 to 12.9 volts. When the engine is running, depending on how much the battery is discharged the voltage will measure 14.0 to 14.9 volts at first, then slowly drop to about 13. to 13.5 volts, indicating the battery is then fully charged.

Since you appear intent on doing a major fix-up, you’ll save yourself a lot of grief if you have the factory service manual. Here’s a link where you can purchase a copy for about $150. Search around a bit on the internet too, for many older cars there are CD ROM versions available – essentially photocopies of the entire manual in CD drive computer format – for a considerably lower price.

You COMPLETELY missed what Barkydog said to you in his response… Regulators do not have brushes. I think Barky hit the nail on the head here in several topical offshoots… Might want to revisit.

OP: "I opened the regulator and cleaned the brushes"
I have to assume you mean: you cleaned the contacts on the relay. regulators don’t have brushes.

“And, yes Barkydog, I was talking about the brushes inside of the alternator, not the regulator.” 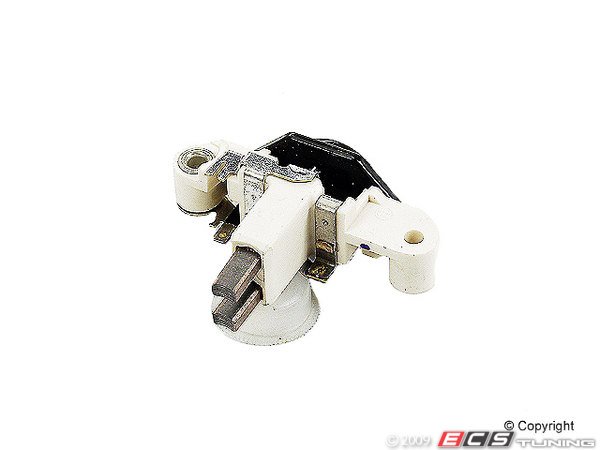 Brush set in back of alternator