OK, some people keep their cars for over 200K miles

Used to be 100,000 miles was the time when people traded off their cars, because more than that and the car would just not be reliable anymore. In my lifetime I’ve seen that change to 200,000 miles, because cars are just that much better than they were 25 years ago.

But 550,000 miles for something that’s not a medium duty or industrial vehicle? This is a 2000 Chevy Silverado 1500, original 5.3 engine. Sure, the seat is broken 3 different ways, every interior and exterior surface is worn or broken away, and the body looks like hell, but the thing is still on the road. As you can see in the pic, the oil pressure is just above 0 at idle, and there’s some valvetrain noise. The engine is just about done. 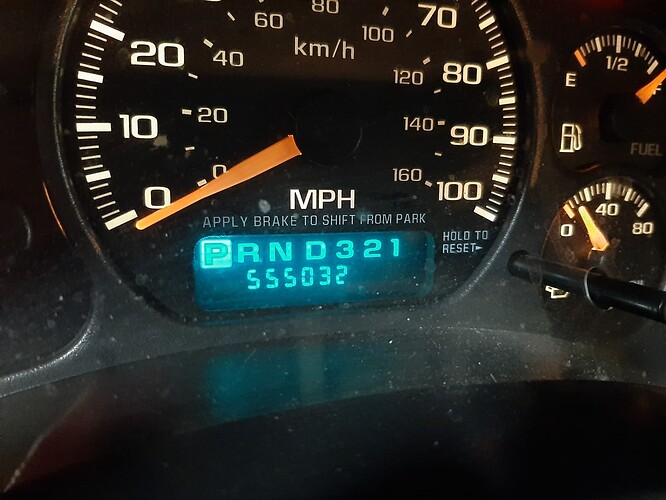 I would have if I had not got rear ended. Even had the differential fluid changed.

My 1999 Honda Civic is near 201,000 miles with its original clutch. Most expensive repair was to replace rusted rear brake lines and, later, fuel lines. Living in WI and MN, that’s not unexpected after 15 or 20 years. The paint still looks good with no rust spots - a little paint pimpling over the rear wheel wheels.

The LS series of GM engines are very good without displacement on demand. Maybe one of the best pushrod V8s ever. Mine has 144K and runs just fine. That is why they are cheap to buy used.

There is a maintenance schedule but there is no fall apart schedule. I guess they don’t all break at the same time. I remember the cartoon that said “the warranty ran out a mile ago.” There were parts falling off for about a mile behind the car.

because cars are just that much better than they were 25 years ago.

It doesn’t seem like it should be true, but that is almost a car of 25 years ago.

I’m still of the opinion that the early 2000’s or so were the heyday of vehicle reliability. The GM (4.8, 5.3) and Ford (4.6, 5.4) trucks were very reliable around that time. And how reliable was a well maintained Toyota Tacoma of the same vintage? Or a Honda Accord? GM’s 3.8 liter V6 engine was arguably perfected around that time, then dropped in 2005. Subsequent GM V6 engines have had more issues, I’ve heard. Later GM truck engines had issues when they received cylinder deactivation. Later Ford engines had issues when they introduced VCT.

The LS series of GM engines are very good without displacement on demand. Maybe one of the best pushrod V8s ever

My transmission has already been replaced once. No idea how it was treated in the time before I got the truck. But, to be fair to the 4l60e, I don’t think most automatic transmissions go 250k plus miles.

Speaking of reliability, one day a guy drove a Cadillac sedan of some sort into the yard wanting to scrap it. It had some interior issues, issues with the hvac system, power windows, and a bunch of trouble lights on in the dash. So not in the best shape, but it still ran pretty darn good with 390k miles on the odometer. He kept griping about how unreliable the car was. I don’t know what he expects, but 390k miles and still functional seems pretty reliable to me! “Crappy GM stuff! I’m getting a Maxima!” Good luck, sir.

I’ve got almost 200k on my MR2. Not sure if I’ll ever cross the threshold because now I only drive it on nice weather days and uh… We get something like 10 of those per year here.

You are more likely to get extended mileage out of them somewhere they dont use salt which is the main reason behind neglected maintenance of mechanical failure .

Huh?..what?.. did you mean structural failure?

Since the 2000’s, living in the Salt Belt and with only normal maintenance, the only vehicle with an early demiise was a Cadillac with the poorly designed early Northstar V8, the rest easily making over 150,000 miles and pushing 20 years only beginning to show signs of rust bubbles.

The amazing thing for me though is that if we adjust for inflation from the '60’s when gas cost $.30/gallon to today when it costs $3.00/gallon (10X), the cost of ownership has actually decreased.
A current sub $20,000 Elantra compared to the equivalent 1970’s $2,000 Vega, is a much better car, will last much longer, faster, safer, better mileage and less regular maintenance.
Of course you can say that the Vega was a “Turkey” but it really wasn’t all that different from most of the Imports (FIAT, Peugeot, Renault, Subaru, Datsun, anything British) and some of the Domestics (Pinto, early Falcons, anything made by AMC)

So much for “Those Good Old Days”, at least for cars.

Keep going. I have a 97 LX ready to turn 475K. First clutch was at almost 260K. Also needed brake and fuel lines. Alternator went last year – the brushes wore down. Just threw in a used replacement. Biggest pain are electrical issues. The driver’s door plug tends to break wires. First thing to go is the mirror adjustment, then door locks. Also the driver side rear lights tend to have issues with wires breaking where the harness follows the trunk hinge. I put in rear wheel arches on both sides to deal with rust spots there. Have someone look at what Honda calls the “rear beam.” It holds the steering rack and is the attachment point for some of the suspension. If you hear a front end rattle going over bumps it is likely the beam. It rusts more heavily on the passenger side where the AC drain drips onto it keeping it damp. It burns oil and loses a little coolant. Might have a slight head gasket leak but a compression test last year showed all cylinders within 5% of each other and all above minimum spec. I look upon it now as an experiment. Good luck with yours.

I’m not going to read everything but my riviera had 520,000 miles on it when I traded. It was hardly a rust bucket and the paint, upholstery, glass and most everything worked pretty well. Only problem was stalling that me or anyone else could resolve. Just because a car has a lot of miles doesn’t mean the fenders are flopping in the breeze.

Seems the early 2000’s were definitely good for long lasting cars.
My 2001 F150 4.6l has 225k on it. Oil changes, tires, etc…
Replaced alternator, and coils and plugs.
Rebuilt from suspension, and been thru a couple sets of tires, and shocks.
Rusty rockers and bed corners.
Wife has a 2003 Durango 5.9l. 150k. Still running great.
Couple sets of tires and shocks over the years.
No rust.
Just bought a 2000 Grand Cherokee with 175k. 4.0L for my kid.
No rust.
Rebuilding suspension (Old cracked bushings), power locks and windows need some attention, and stereo speakers or amp are wonky…
Runs great, and no leaks, though.
I have looked at many later trucks (2010-2018) trucks, and many have the same or more miles as mine, and a lot of them are even rustier than mine…
So I’ll just keep what I have.
I have new rockers and cab corners waiting to be installed, and will drive it till something really bad dies (engine or tranny just give up)

HUH? Why wouldn’t cars be better then they were 25 years ago? You mean that car manufacturers are not intelligent enough to learn how to make cars better?

HUH? Why wouldn’t cars be better then they were 25 years ago? You mean that car manufacturers are not intelligent enough to learn how to make cars better?

Please quote (or at least read) the entirety of what I said:

“It doesn’t seem like it should be true, but that is almost a car of 25 years ago.”

I said that in reference to the truck he mentioned in the post, a 2000 Chevy. It doesn’t seem like it should be a car of (almost) 25 years ago, but it is.

But, you’ll have to define “better”. If you’re asking for my personal opinion on reliability, I do not believe that a 2020 Chevy Silverado is more reliable than a 2000 Chevy Silverado due to the addition of cylinder deactivation on the engine, which a 2000 Chevy Silverado did not have. Nor do I believe that a new 4 cylinder Accord with a turbo is going to be as reliable long term as a V6 Accord from the early 2000’s. It’s not about the “intelligence” of auto manufacturers. Their only goal is not to make a vehicle that lasts as long as possible. Other things come into play (such as trying to reach fuel mileage goals with cylinder deactivation, etc), which have absolutely made some models or engines less reliable (case in point, GM’s 5.3).

because cars are just that much better than they were 25 years ago.

It doesn’t seem like it should be true, but that is almost a car of 25 years ago.