It was time for an oil change on my 1999 4Runner that is in pristine condition. I just did an oil change / minor service and I see from the paperwork the mechanic used 20w-50 oil instead of 5w-30 that I’ve always used. Will this harm the engine? Should I tell the mechanic to replace the oil with 5w-30?

The 50 weight of the oil is the viscosity the oil becomes once the engine becomes hot. Very thick

This makes it harder for the oil to be pumped to critical engine components such as rod/main bearings of the engine. And once the oil reaches those components, the oil spends a longer residence time at those components and the oil breaks down from the heat.

Toyota spent millions of dollars dyno testing their engines to determine what oil provides the best protection and engine life.

Using anything else is a crap shoot.

I would take it back and have the proper oil installed. Unless you live in Florida or Hawaii, the oil in winter will be too thick on start up to properly lubricate the engine; modern engines have very tight clearances.

For instance, Shell lists the Pour Point, which is exactly what it means, of one of their oils, a 20W50 as -12F, while a 5W30 has a pour point of -32F, good for virtually any US application.

So 20W50 acts like molasses on a very cold US morning and your engine will suffer rapid wear.

Your mechanic may not be smart enough to understand this but just have him change to the proper viscosity.

Heavy duty trucks that use this oil have engine block heater and then run virtually all the time .

P.S. You INVOICE should say what oil was put in the car. I’m still suspicious that your mechanic was clearing out old 20W50 stock.

I did take it to the mechanic moments ago and his computer that prints the clear window decal with Next Service mileage was stuck on 20w-50. He confirmed the oil used was correct 5w-30. Whew!

I did take it to the mechanic moments ago and his computer that prints the clear window decal with Next Service mileage was stuck on 20w-50. He confirmed the oil used was correct 5w-30. Whew!

Wow, that was not convenient.
May I ask what kind of oil change shop did the service?
Was it a known facility with several locations?

Also, does the window decal indicate that the next change is due in 3,000 miles?
CSA

It was a local mechanic who I’ve used for years, not a chain. The next oil change looks like 3500 miles.

So just a misprint on the windshield sticker. I wonder if that shop has any 20W50 in stock. No shop that I have worked at in the last 30 years had a use for 20W50 or had it in stock.

Any mechanic that knows anything about cars would not be using 20W-50 in any modern application . The heaviest anybody has used in the last 30 years is 10W-30 with most now being 5W-30 or thinner

There is enough difference in 20-50 and any satisfactory oil in that engine to tell the difference wiping the dipstick off on your finger when the engine is cold. Any experienced mechanic can confirm if the oil is actually 20-50 quickly.

Any mechanic that knows anything would read what’s on the oil cap. 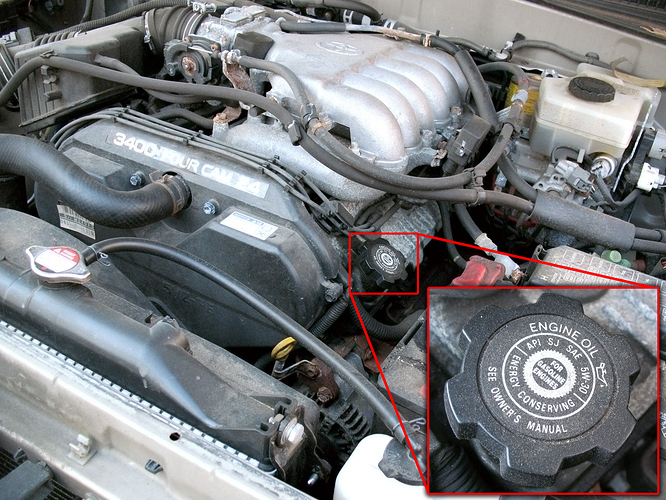 Thanks for the replies. The Next Service window sticker was misprinted and was at fault. As per my previous post the mechanic confirmed that his computer printer misprinted the sticker and he looked at his computer records to confirm 5W-30 was used.

D - your first step should have been to call the shop .

Volvo_70, the shop is only walking distance so I decided to stop in on my way to the market. I thought about phoning but I wanted to personally see how the shop owner reacted and his steps to confirm what oil was used.

It’s a very common viscosity, and many shops stock AND use it

Maybe some diesel trucks use it but any passenger vehicle hasnt used anything that heavy in quite a few years .

I would guess that 30 years ago 20W50 was one of the most popular grades of oil on the market.

I would guess that 30 years ago 20W50 was one of the most popular grades of oil on the market.

I’ve known 20W-50 to be used in high mileage engines that are on their last leg, and if an engine needs that oil viscosity then it’s time to rebuild or junk the car. New engines have tight tolerances and need thin oil to penetrate the tight clearances. Even though my 4Runner engine has 170,000 miles on it, it is in perfect condition. I’ve had compression tests done (all cylinders almost identical), it doesn’t burn a drop of oil nor does it leak a drop of oil. This is why I was alarmed to see the window sticker with 20W-50 on it.

I would be alarmed too, you did the right thing . That is way too heavy for any modern vehicle.