Nissan 720 overheating but im not sure if really is

My nissan 720 3 months ago ran fine with no overheating issues but then it got smashed up so i started taking parts off to fix another one including the radiator thermostat a bunch of other stuff but thats all that matters. I finally decided to put new windows in it and get it running again. It is overheating now. I know for a fact that the radiator, water pump, and thermostat are all good and i have good water flow amd pressure. Ive been working at it all day and yesterday. I replaced the temp sensor and gauge cluster because i feel like it could be an innacurate reading. The temp gauge reaches about 3/4ths of the way then shoots way above the red mark like way above the overheating mark and i can still touch the water in the radiator. I am stumped and its getting pretty irritating what else can i do

Get an accurate thermometer for one thing… The non-contacting IR temp guns are cheap now and very useful for things like this. $17.15 and you can check what temps it is getting to. Likely you also have an air bubble in the system. Set the heater on full heat, leave the rad cap off and let the engine run until warm. Squeeze the upper hose to burp out the air.

Have you tried replacing the fan clutch? 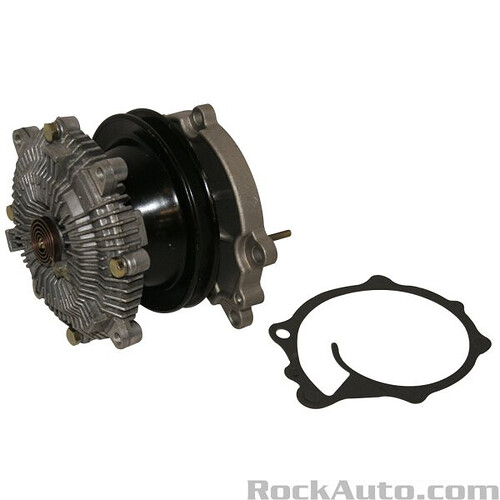 If you have good circulation and the engine is above normal operating temperature that coolant should be steaming hot, you wouldn’t be tempted to touch the coolant.

Likely you also have an air bubble in the system. Set the heater on full heat, leave the rad cap off and let the engine run until warm. Squeeze the upper hose to burp out the air.

Yes. A detail about the heater setting: you want the temp set to Hot - on some cars that’s needed to open the valve between the engine and the heater core. But don’t run the heater fan - it would do a lot of cooling via the heater core, which is a small radiator. Good to know if you need additional engine cooling, but not helpful here.

The temp gauge reaches about 3/4ths of the way then shoots way above the red mark like way above the overheating mark and i can still touch the water in the radiator.

My first guess is the coolant temperature sensor circuit is faulty. I think the sensor is just a resistor who’s resistance varies with temperature, thermistor in other words. If so, suggest to remove it and heat the sensor end it in a pot of water while you measure its resistance w/an ohm meter. If that tests ok, could be a problem on the other end, where the sensor connects to the panel connection. Or with the coolant display meter on the dash.

Good idea. Thermostat, too, can be water tested with a thermometer, to see if it opens at its specified temperature.

I hope you are not running just water in the cooling system. IIRC, there is a bleed screw next to the thermostat housing on this model. If you haven’t replaced the radiator cap, I’d just do that. It’s cheap and is so often the cause of overheating, yet so often overlooked.

I hope you are not running just water in the cooling system.

For a while when diagnosing, plain water is OK.

For a while when diagnosing, plain water is OK.

No it’s not, except when looking for a leak, but not for diagnosing an overheating condition.

Plain water is acceptable on the racetrack, they don’t allow coolant.

I might be wrong, but I think the lowering of the freeze point of a proper antifreeze/water mix is greater than the increase in its boiling point. Say, from 32F to -34F with a 50-50 mix, that’s 66F lower. Does its boiling point go up as much? It’s the higher pressure from the radiator cap, much more than the effect of antifreeze, that raises the boiling point above 212F.

In short: antifreeze is to protect from freezing. It has some, but not so much, effect on the boiling point of a pressurized fluid. Data, physics, anyone? 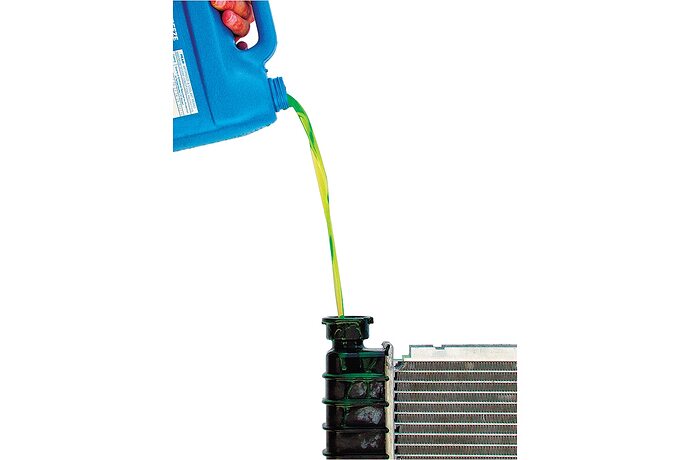 Glycol Or Water - Which Is The Better Coolant? - Hot Rod Magazine

The specific heat capacity of ethylene glycol–based water solutions is less than that of pure water. Propylene glycol, another common coolant, has an even lower specific heat. Of all common liquids, water requires the most heat energy to change its...

This article assumes that a higher heat capacity automatically has better heat transfer. I have had vehicles that would overheat with straight water but not with antifreeze added.

A lower heat capacity means that the supplied BTU’s will raise the temp of the medium higher, and a higher temperature will increase the rate of BTU’s shed in the radiator, resulting in a faster heat transfer, which is what you want in a cooling system.

Anyway, once there are no leaks, you troubleshoot under the conditions the system is designed for, which includes the specified coolant. Anything else is adding an additional factor and can skew the results. That would be like looking for the reason that a high compression engine is knocking by using regular gas when it specifies premium.

Plain water is acceptable on the racetrack, they don’t allow coolant.

Is that b/c of some safety issue?

Coolant is a lot more “slipperier”

than water. I don’t know if that’s the official reason, though, just a guess.

Ok, you mean if one of the race cars engine spits its coolant onto the track, if just plain water racing can continue for the rest of the day. I was thinking it might be for fire reasons. I think coolant is flammable in certain situation.

Coolant takes longer to clean up after a crash or spill, also a hazard if a car is leaking during the race.