I’m pretty sure that the Luddites of that era were opposed to this new technology, and would have preferred standing in the rain while searching for the key to their garage door.

And, of course, they would say that “this is just one more thing that will need to be repaired”. 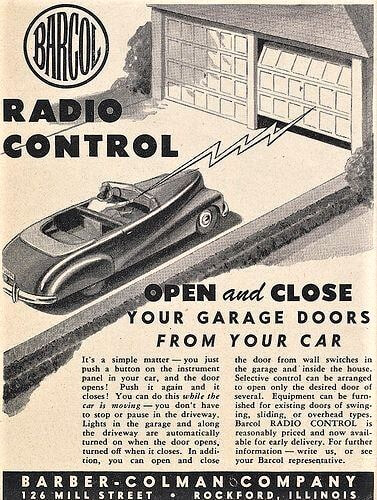 I won’t own a garage without one.

That would be my dad. Power steering? Just one more thing to go wrong.
When I was 16, first car I looked at was a 59 Ford Sunliner, had PS, my dad did not like that. Salesman said just cut the PS pump drive belt!

That would be my dad. Power steering? Just one more thing to go wrong.

I had a neighbor growing up who bought a new car for his 75yo (90lb) wife WITHOUT power steering wheel. Same reasoning. You should see her struggle trying to back that car out of the driveway.

That would be my dad. Power steering? Just one more thing to go wrong.

In 1970, my dad bought new a Pontiac Catalina full size (and I do mean FULL!) 4 door car. 21 feet long and 4000 lbs at least. He ordered the car with NO power steering or power brakes. It came with HUGE 4 wheel drums and the skinny rim steering wheel. It wasn’t 6 months of driving this barge that he wished he’d ordered it with power steering at least.

My 5 foot 4 inch sister inherited it when she got her license. She used dad’s power steering equipped Oldsmobile 88 to take the test. I don’t think she could have parallel parked the Pontiac to pass.

My dear mother, 78 years old and still driving the '75 Buick she bought brand new, doesn’t want one either. She’s perfectly happy getting out of the car and lifting that door up by herself.

She also never uses the dishwasher and still hangs clothes out to dry when it’s sunny.

There was a transition period from manual to power finally I think in the 70s that most larger cars had power. But if I remember back, it was not unusual to think power a luxury. Our, 58, and 61 Chevy wagons were manual and not that bad. Our 60 and 62 falcons were manual as well as the lark. My vw and my 68 dart were manual. Our 57 ford, 61 merc, and my 59 Pontiac were power. So it was a mix with the larger cars being pushed with power. Manual steering though was geared different and based on experiences with manual, it may not be unreasonable to expect power to be unnecessary.

Just like central air, it takes a while for prices to come down and for the features to become more popular. From 1948, many garages did not have roll up doors and many were not attached. I think it was 1976 that I installed my first opener and many in the neighborhood did not.

Then snow blowers. Wouldn’t be without one, but some are still shoveling. As a kid, only the guy that worked for the implement dealer had a blower. I don’t know if it is Luddite behavior but the stars need to alight with higher incomes, lower costs, changed design and expectations. And power tools. . . I was the only one in the family to have a power drill. Saws came later.

I used to think a door opener was one good way to actually improve a person’s life style. Not many opportunities present themselves to make a clear lifestyle improvement. If somebody would come to your abode to replace your bedsheets with a freshly laundered version every day, make-up the bed anew, that would be a clear lifestyle improvement,; but that’s unlikely to happen. Back to the door opener, I eventually decided the one I had was causing more problems than it was solving. A sale came along so I purchased a new one, but never installed it.

A lot of people did not like power steering in the early days and it wasn’t because they were luddites. Most cars back then had large diameter steering wheels and geared to have around 4+ turns lock to lock, so when cruising down the road, it didn’t take much effort to steer the car. Turning the steering wheel when at a stop was a ***** though.

Power steering was great for turning while not moving, but it was very sensitive when rolling down the road and that was what many people did not like. Dare to breath and the car would be all over the road. Eventually they developed a variable assist power steering that provided a lot of power when needed at very low speeds, but less as the speed increased.

Edit, the last car I had without PS was a 1990 Dodge Colt (Mitsubishi).

so when cruising down the road, it didn’t take much effort to steer the car

Another thing that changed significantly was the alignment. Specifically the caster angle. If you look up alignment specs for, say, a '48 Chevy, you might find the specified caster to be negative or neutral (0 degrees). This will aid low-speed turning effort, but will make the car wander and hard to track at higher speeds. On a modern day car, caster is usually +4 to +6 degrees. I’ve seen spec as high as 10 degrees positive.

Yes, that is true. I had an 86 Toyota Tercel 4WD Wagon that PS was optional. The front struts had 4 upper mounting holes for three studs. This gave two separate caster angles, one for the Non PS and one for the PS equipped cars. Mine had the PS.

I’m not so sure about moving all controls to touchscreens. To me that is not a convenience. Both my cars have buttons for heating and radio.

Heh heh. Yeah I have a new opener on the shelf too and haven’t installed it. My problem is that I have two openers and four sets of buttons to open and close the doors by several entries. The new opener uses a rolling code and radio transmission to signal the door. So the old way of wiring all the switches to the opener terminals won’t work. I am not ready to give up my convenient switches.

Looking for a work around I found others had the same issue and gave up. I think I have a work around but need more ambition to actually try it. I think by having a transmitter that I would tie into the two contacts inside and then tie my switch wire to them woul work. That way pushing one of the switches would activate the transmitter which would then sens a scrambled signal to the opener. My thought was to just attach it to the back of the opener but I worry about how often the battery would need to be replaced. I’m thinking I could run a separate wire to mount the slave transmitter to a more convenient location but I confuse myself evertime I try to actually do the schematic. So I’m still waiting for better weather and energy to take it on.

Why they don’t make a provision for multiple remote switches is beyond me. I have a 3 car garage and three service doors and a major issue to only have one opener button. Same thing with light switches where I have four sets of 3way and 4way light switches.

So at any rate, that’s why mine sits on the shelf and not because I’m a luddite. Sometimes new and improved is nit improved and I’m not about to go the route of using my smart phone every time I want to operate the door.

Yeah and the warranty is long gone

Out first home ( built in 1929) had garage doors that swung away. Big and heavy doors.

I installed an additional header across because the opening was too tall for a 7 foot door and installed a rollup door with an opener. Wonderful improvement.

If somebody would come to your abode to replace your bedsheets with a freshly laundered version every day, make-up the bed anew, that would be a clear lifestyle improvement,; but that’s unlikely to happen

Move to a hotel. It’s actually getting very popular with many seniors.

Move to a hotel. It’s actually getting very popular with many seniors.

So is living on cruise ships!

In 1948 we had swing up garage doors, so I would have found a garage door opener as useless then as I do push button start now.

I lost my car keys in Indianapolis and when I returned to Buffalo, I had to get my wife out of bed at 2 am to bring me my spare keys. I determined that would not happen again so I cut the key off flush with the ignition lock so you could not see it was in there and all you had to do was turn the ears of the lock. I never licked the door anyway because who is going to take a $200 standard shift car.

I never licked the door anyway

That’s good, especially this time of year in Buffalo!

I don’t even kiss my car, much less lick it.

If we had swing up doors or swing open doors in some of the winter storms, I grew up with in Central NY…We’d have to get the shovel from the garage, then go out the front door and shovel our way to the garage door to clear the snow away so we could open the door. There were times where the snow drifts were over the top of the 7’ garage door.