I own a 2002 chevy impala with a 3.4 engine. It has 295,000 miles. Probably 90% of those miles have been interstat3 mile. Well as of late I’ve been having a sputtering issues when traveling at high speeds. I’ve had a new fuel filter put on and new spark plugs and wires. But it continues to do it. It happens mostly when traveling up hill. If I punch it it’ll go fine. But if I lightly push on gas pedal to maintain speed it reallly start to sputter. Normally any where from 55mph to 70 mph. Any suggestions or ideas will be greatly appreciated

Torque converter comes to mind, Your analysis or a shop?

aNy chance it could be the fuel pump though?

If it is the torque converter? Will the dealership be able to tell

You don’t need to take it to the dealer ( assuming you mean new car dealer ) . A good repair shop needs to look at this and give a reasonable theory as to what is wrong. That will cost about $100.00 or a little more then you decide if the vehicle is worth the amount of money to fix it.

I’ve took it to my main guy and he doesn’t see anything wrong. The problem is that I use this car to make a living and I put a good amount of miles on it every week. I took him for a drive and it didn’t do it all all. Well it doesn’t do it all the time. It just seems to do it on hills or small inclines. But as soon as I put the pedal down it’ll go just fine. The engine hasn’t been over heating or anything. The transmission doesn’t seem to be slipping at all. I’m just looking for ideas to suggest. Also i’m hoping to get ahead of the problem before a bigger issues arises. Any and all solid ideas are appreciated

“Well as of late I’ve been having a sputtering issues when traveling at high speeds.”

Sputtering? Could you possibly describe the problem as a “surging” situation? Would you buy “bucking” or “jerking” ?

If “Yes” then…
A faulty TPS (throttle position sensor) can cause this and sometimes without triggering a CEL or setting any fault codes. I wouldn’t overlook the TPS as a culprit. Check it out.
CSA

No engine light is on and yes it kinda surges and jerks.

Having the throttle position sensor changed tomorrow. Will update on if problem is fixed

Having the throttle position sensor changed tomorrow. Will update on if problem is fixed

There is a way to test the functioning of the TPS if you catch it when it’s acting up. A mechanic should be able to do that.
CSA

They did not change the wireing only the sensor. But the car is still having the same issues. Any way this could possibly be a fuel injector?

Problems that occur only when going fast are often something to do with the air or fuel delivery max flow rate into and out of the engine. Fuel pump, clogged fuel injectors, clogged air filter, clogged cat or obstructed exhaust. Going fast also stresses the ignition system, especially the coils. My guess is the fuel injectors are a little clogged. Before investing money in a proper diagnosis, might be worth a try at running some auto parts store injector cleaner through a couple of tankfuls, see if that helps.

The car idles fine. Now I have noticed that the left side of the engine looks like it has some freeze or something on it. Also normally it’ll stop as soon as I push gas pedal further down 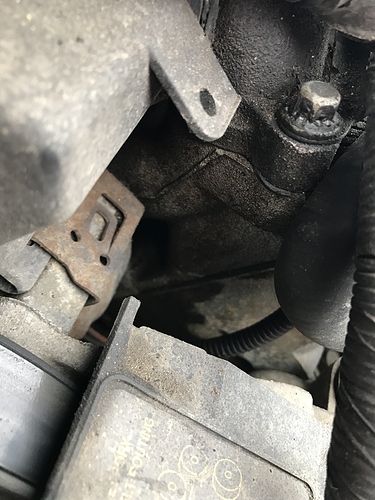 I’ve got the exact same car (2002 Impala w/3.4L engine, 200,200 miles). I had been having a repeated engine miss on the highway off and on. No CEL when it would happen, althought I would get a P0442 (gas cap) code and a MAF P0102, but I’d been having those off and on for a year or more. Also had a weak idle that would stumble itself into a stall sometimes. Seemed to depend how long I had been driving, and/or how I came to a stop. Come up very gingerly and slowly, usually no problem. Come up quicker and stop more suddenly, maybe the rolling stumbling would start “under its breath” and then it would work itself into a crescendo, then POOF … stall!. But the highway stumbling sounds similar to what you’re seeing.

I opened the throttle body, turned the buttlerfly out of the way, and emptied about 2/3 can of Carb Cleaner with the red straw on the nozzle, pointing all around 360 degrees, until it ran out mostly clear. It’s been running fine for a week now.

If that doesn’t do it for you, then I’d be checking the fuel pressure or looking for coolant leaking into a cylinder and fouling a plug. I’ve seen that before, too. Are your intake gaskets still original from the factory? These engine pretty much all leaked. I changed mine out at 104k and they were leaking. If you bought your Impala used, who knows when (or IF) those gaskets were changed out.

Yeah, more I think of it … at THAT mileage, wouldn’t be surprised if you’re getting some coolant fouling a plug. It wouldn’t throw a code for that, I don’t believe. Maybe you’re losing coolant but not enough to notice. I’d start tracking your coolant level once per week to see if you’re losing it through the engine.

I opened the throttle body, turned the buttlerfly out of the way, and emptied about 2/3 can of Carb Cleaner with the red straw on the nozzles, pointing all around 360 degrees, until it ran out mostly clear.

I assume you mean “red straw on the nozzle of the Carb Cleaner can.” (?)

Also, make sure the red straw doesn’t get spit off into the intake manifold.

Took it to dealership today. Suggested everything that you guys have told me. Dealership wouldn’t look at the car cause there are no Check Engine lights. I was kinda dumbfounded but disappointed and left. Now trying to find another mechanic