I drive an 07 Nissan Versa, used mainly for work and university so it racks up a lot of mileage. Past few weeks I have been having issues with an oil leak, took it to the mechanic who pointed to a loose screw on the valve covers as the culprit. They changed the valve cover gasket, added silicone, and on top of that, even rethreaded the slot where the screw goes since that was apparently an issue. After all of that, I took the car home and just a day later, the car started leaking oil again, and this time in crazy amounts. I lose half a quart in a day!! Took it back to the mechanic who sounded like he gave up on it and said there isn’t anything more he can do. I want to give up on it as well but I don’t have any other car and can’t afford a new one, previous repairs on this car already cost me a ton! I need help/advice, anything would be of great help since I am now at a dead end.

Without car in hand, I cannot tell you what this problem is or how to solve it. I generally don’t like to badmouth another mechanic but if this guy cannot fix or figure out how to stop a valve cover leak he needs to surrender his tool box and find another line of work.
He’s overlooking an obvious flaw somewhere. How about another opinion from a different shop?

Just some food for thought, but maybe there’s an issue with the PCV valve. A faulty PCV can cause the engine crankcase to pressure up and force oil to leak out of the engine at various places. A PCV is considered a normal maintenance item to be checked every so often and they’re cheap. Generally 10 to 25 dollars or so. To me anyway, the PCV is the first thing to look at when there’s an issue with oil leakage. Sorry I can’t be of more help.

I don’t have any other car and can’t afford a new one, previous repairs on this car already cost me a ton!

Doesn’t make sense. If you hadn’t spent a ton on it, you could afford a new one? It shouldn’t be that hard to find the leak. I suspect at a half quart a day, it isn’t leaking out of the valve covers. I’ve lost that kind of oil with a sending unit failure, oil pan gasket, broken oil line, etc. but not a valve cover.

Took it back to the mechanic who sounded like he gave up on it and said there isn’t anything more he can do.

Perhaps the rear main crankshaft seal is leaking and replacing it is beyond his capability. There must be more that one auto repair shop in a university town.

I would take it to another shop but the “faulty screw” that he blamed for the oil leak was actually last touched by the same shop, a year back when I did replace the same valve cover gaskets. And also, the oil wasn’t leaking as bad until after I had this recent most work done, so I think I might try taking it back to them because you’re probably right, they definitely missed something in the process of changing my gaskets this time around. I also just purchased a new PCV valve which I’ll be changing shortly, hoping it makes a difference

The leak is coming from the same spot, around the valve cover, and he did his best work on the new gasket which is why I think he was disheartened and gave up on it. I will try a new shop after I ask them to take one last look at it since the leak magnified after they did their work. Before they worked on it, the leak was nowhere near as bad it is right now. There’s legitimately a 2 ft wide wet stain under my car every morning

Wasn’t suggesting that I could afford a new car with the repair costs, just that I’m broke

and we isolated the leak to be coming from the valve cover because it would start from the top of the engine on the side opposite to the oil pan.

Seems impossible for a valve cover to leak that much while the car is parked, there is no oil stored in the valve cover area when the engine is off. Is the oil collected by an cover under the engine, then dripping overnight?

For a mess that big I would suspect that the drain plug is loose, an easy repair.

Seems impossible for a valve cover to leak that much while the car is parked, there is no oil stored in the valve cover area when the engine is off. Is the oil collected by an cover under the engine, then dripping overnight?

I agree with this. 1 qrt of oil a day is a lot of oil for a valve cover gasket. It’s not under pressure. And you’d also have a lot of smoke inside the engine bay because that oil is going to drip down the engine and burn off. Something else is going on.

So while I was changing the PCV valve as per your suggestion, I noticed a missing bolt around where the oil is coming from. Is that possibly the cause of the leak? There’s just no way my mechanic missed this since he looked at it twice over before he gave up on it. 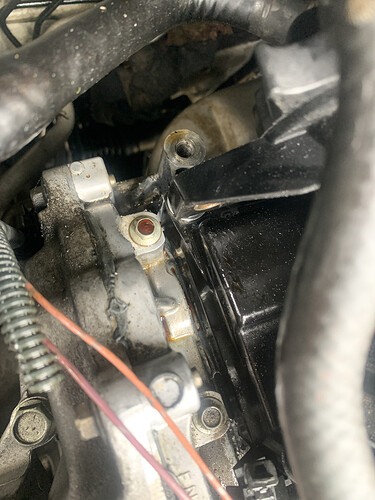 I cannot figure out what goes in that hole. I pulled up pics of several used Versa heads of that era and the only thing I could see was a slotted screw. I have no why that screw is missing or why your guy overlooked it but it seems to me that a slotted screw should be a necessity. You may have to check with a Nissan dealer on this and a screw should not be expensive. This is all assuming I was looking at those heads correctly.

First step is make sure the oil level is FULL and keep it that way until sorted out. You might try letting the engine idle and note if you see any oil coming from anywhere up top; either around that hole or the valve cover. If not, and with a leak this big, the oil drain plug, oil filter gasket, or possibly the oil pressure sending unit is leaking.

I can’t say that I agree with your guy using silicone. That to me is grasping and silicone should not be needed on a valve cover installation on any modern era car. It was common for GM back in the 70s and 80s to install valve covers with no gaskets at all with only the use of RTV sealant but those covers were stamped steel and RTV actually worked better.

I wonder if he damaged the valve cover?

A small oil leak can look like a big leak on the ground after you’ve been driving and the oil has been blown all over the bottom of the engine and dripped all over the pavement after parking. So start off by bringing the oil up to full and checking it daily to see how much you’re actually losing.
If it’s less than a quart a month and you’re tight on funds, you might want to just keep an eye on it.

That being said, Nissans at around that age seem to have a problem with the sparkplug well oil seal gaskets giving up the ghost and leaking there. Not a major problem so get a second opinion, preferably from someone familiar with Nissans.

The pic you gave us looks pretty clean. Not a lot of old oil or other gunk on there. If that’s the case for the whole engine, then it shouldn’t be too hard to figure out where the leak is coming from. If you could narrow that down for us, we’d have a much easier time giving you ideas as to what it might be.

As another option, you can go to an auto parts store and get a leak finder kit. It has UV dye and a UV flashlight and often some tinted glasses. You dump the dye into your oil, run the engine for awhile, then close the garage door, turn off all the lights (or wait till it’s dark if you don’t have a garage) and shine the light around until you see the glowing dye. That tells you where the leak is.

With an oil leak that size, you should be able to see the trail of oil from the leak. First thing is to determine if it is the valve cover. Dry it off with a rag or paper towels. Then dust all around the gasket area with some talcum or baby powder. Run the engine for a few minutes and if there is a leak, you will soon see it.

Next, follow the spot on the ground to the point on the engine just above it and look for a trail of wet oil leading to the leak. You may find it this way. you could dust the whole engine with powder and find the leak after a few minutes of driving.

Take a straight edge (ruler or stick of wood etc) and align it to the front edge of the valve cover. Now check the areas line the fire wall, radiator etc that the stick is pointing too for oil. Also on the shield directly under the engine. If you see a ring of oil, the front seal has failed. This is quite common on engines with a timing chain. The timing chain cover could also be leaking if the oil is only on the shield.

On more often overlooked leak is the oil pressure sending unit. They will spray oil out but generally do not leak once the engine is off, but they can spray a lot of oil out that drips from the engine bay after the engine is shut down.