We have a 2009 Prius and the only complaint we have about it is that mice get in on a regular basis. We have removed a mouse nest from the glove compartment and the dealer has removed a huge nest that was on the filter that is behind the glove compartment. The last time we took our car to the dealer, the service manager told us that Toyota uses a soy-based coating on their wires and it attracts mice and sometimes squirrels. This has become such a problem for us that we are thinking of trying another make of car. We are considering trying a Honda Accord Hybrid or a Honda CR-V hybrid. Does anyone know if Honda also uses a soy-based coating on their wiring? Are some makes of cars more mouse-proof than others? Or can mice get into any make of car? We live on a farm and our car is not parked in a garage, but is outdoors all the time, so mouse-proofing a garage isn’t an option for us. We would appreciate any recommendations. Thank you!

No CRV hybrid, and only used Accord hybrids, they didn’t get great mpgs. But no, I don’t know about the wiring.

No car is Rodent proof.
I worked at a Benz dealer and rats loved them. Sometimes they would still be hiding under the hood when the cars were brought in for service! So high line cars aren’t necessarily better.
I believe a large part of the problem is that you "live on a farm and . . . car is not parked in a garage, but is outdoors all the time . . ."
You may just have to accept this as part of farm life. If big nasty rats can make a home in your car, a little mouse will have no problem whatsoever.

Well sometimes you can find the fresh air intakes and what have you and put hardware cloth over them that will help some(at least keep them out of the air filter.No this is not peculiar to Toyotas,even Briggs and Stratton engines should have the blower shroud and sheetmetal removed every spring and the rats nests cleaned out.
Glue boards traps will help,but the rural setting almost guarantees rodent problems-Kevin

If they are chewing the wiring, then a thin coating of Tabasco sauce will prevent that from happening.

It seems like you could at least keep them out of the passenger area and glove compartment by keeping the windows up and doors closed when the car is left unattended. Or is there a way for the mice to get inside the passenger compartment even with the doors and windows shut?

Also, go to a local feed store and ask if they have any ideas. They must have this problem too, and maybe have discovered some tricks to pursuade mice to stay out of certain areas,or at least not chew on stuff in those areas.

It’s amazing how small an opening mice can fit through, hard to block them all.

Time for a cat.

If you can put it in an area with Decon. It will work but you need to protect it from animals. Putting Decon inside of a wire cage with an opening only mice can get in and out of works.
A mouse trap made of a plastic pail filled 1/2 full with water with a ramp going to the top and a peanut butter laced wire stretch across the top will entice mice to drown in it. It works very well. I would place a couple near the car. Killing mice is all that works. An option I’s to bury pail so top is at ground level with the wire accessable with out ramp. 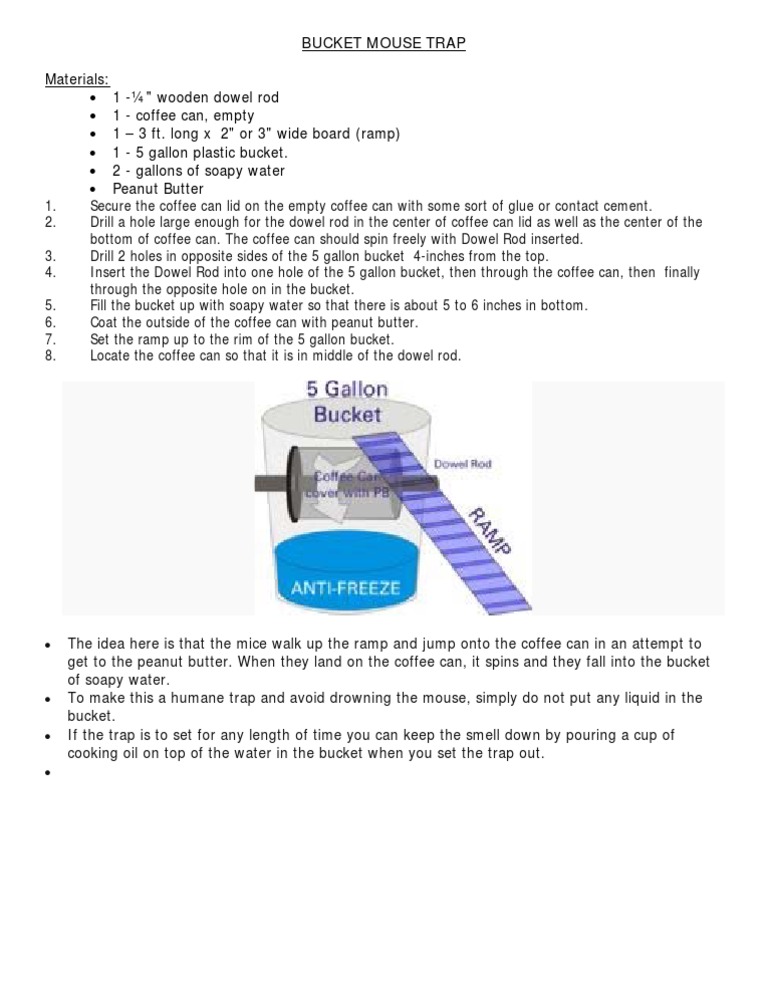 Make your own mouse trap

This is similar though out doors use water instead of antifreeze. This is used by a feed store that I have seen.

Thanks for all the responses! A little discouraging to realize that there is no car we can purchase that is mouse proof. I guess for now we will just continue to keep a trap under the passenger seat. We have caught dozens of mice with it. At least we know we are keeping them in check. Since we don’t want to make our cat live in our car, it sounds like we need to figure out where we can build a mouse proof garage.

My wife’s grandparents had a rodent problem in a Camry that was fixed by fox urine–it is available as a pest repellent. Just Google “fox urine”.

I’d also put the traps and bait in the garage, try and catch them before they make it into the car.

Two stray cats have been so successful hunting in my yard that there hasn’t been a single mouse caught in my basement traps this winter. Usually there are 6 or more snagged over the winter.

It is an ongoing war at my house. Let me say, you can win some battles but the war will never be over. The point of ingress is in all likelyhood through the air inlet snorkel. This is right above the glovebox/cabin filter in most cars. Look down through the exterior valence panel and you can see a small raised snorkel for ther fresh air inlet. Mice climb up the wheels, over the innerfender and into the area above the firewall. They then can easily get into the car through this snorkel inlet. Cover this with mesh screen and you’ll keep them out of the interior.

. NO CAR is mouse proof. I wouldn’t be hard on yourself about the purchase. Continue to be aggressive about killing them.

Perhaps They’re Just Part Of The Car’s Drive-Train And A Few Of Them Just Figured Out A Way To Break Out Of That Little Wheel They Run In When You Go Someplace.

Has the little car’s performance been below par, lately ?

The hardware stores carry a spray called “Critter Ridder” that allegedly is very aggrevating to rhodents and will repel them. It’s worth a try.

Here’s some reference info about rodent damage to auto wiring and how to minimize.

Mice can do thousands of dollars in damage to simple GM pickups and often the damage continues to show up for months after first recognizing the problem. Wires can be gnawed bare but cause no problem until they make contact with a bare metal surface and short out. The main under hood wiring harness is quite costly, as is the labor to replace it. I would imagine that a Prius harness would be somewhat more expensive.

The only repair job on my 4Runner has been a several hundred dollar repair to the wiring in the overhead console all the way to the rear. Mice chewed it up. Decon gets spread in my garage now !