That could be the mystery 7.2L. Pretty darn close.

As I wrote, the owner knows - well, I’ll change it to - less than nothing about the car.
I’ll try tomorrow to identify the engine, but a hint about where to look and for what on the engine will certainly be helpfull.
Thank you to all for help so far, I’ve got more than expected and I know the owner will be gratefull as well.
Don’t let that statement hold you back. The more, the better.
I’ll be back.

DIN is an acronym for Deutsches Institut für Normung eV.

Here’s more info on the MEL engines, one of which (probably) in in that Merc:

Ford developed the MEL ("Mercury-Edsel-Lincoln") engine series as the replacement for the Lincoln Y-block V8 engine for use in large passenger car applications. These engines were produced in Lima, Ohio at Ford's Lima Engine plant. They were in turn replaced by the 385 series engines. All MEL engines had wedge-shaped combustion chambers formed between a flat head surface and an angle milled block deck (10 degrees off square with the bore axis), with the piston top determining the compression rat... 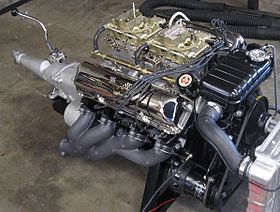 The Ford FE engine is a Ford V8 engine used in vehicles sold in the North American market between 1958 and 1976. The FE was introduced to replace the short-lived Ford Y-block engine, which American cars and trucks were outgrowing. It was designed with room to be significantly expanded, and manufactured both as a top-oiler and side-oiler, and in displacements between 332 cu in (5.4 L) and 428 cu in (7.0 L). "FE" derives from 'Ford-Edsel.' Versions of the FE line designed for use in medium and he...

YES, You got it. My memory is not what it should be.

Well, according to the 1965 Mercury brochure, stock engines would either be a 390 or a 427, which would make them Ford FE engines:

If you don’t have one, you might consider combing flea markets and/or used book stores for a “Motor’s Auto Repair Manual” or “Chilton’s” for that era. Who knows, you might get lucky and find a factory manual for it!

Thanks for the suggestion. When the owner first asked me if I could do a little job to fix the brakes, slop in the steering (pitman arm, boy, did that one make a dent in his wallet) and a bo… - trunk lid lock it was with the intention to sell it.
After some talks and some thinking he’s adamant to keep it and have me doing it up. There are so many smallish things to do on it that I will have to do it in stages. I have requested that he’ll find me a competent workshop manual in order for me to say yes to keep on working. edb1961 has given me a good idea where to get it if he doesn’t find one himself.
Next stage will be doing something about the strong smell of unburnt gas inside the car - at idle and city driving - and brake pipes and I’ll have to fabricate them myself. At least that won’t be a problem as long as I can find the fittings.

I just checked. RockAuto ships to Europe so the fittings should not be a problem and I have sources in DK as well. Thanks Ed B.

For the age, not a bad looking old car at all and kind of a rare one to boot. I’ve been around old cars all my life and can’t remember even seeing a '65…

There were 2 slightly earlier Marauders (64s) sitting behind a house in a small town about 20 miles away from me. The guy wouldn’t sell them. They sat there rusting away for over 30 years until he passed away and the family scrapped the cars before selling the property.

Not since the early 70’s is SAE Hp measured that way. The Park Lane wold have been advertised with the old SAE Gross rating back in the day. Like the DIN standard, it is measured at the flywheel with everything attached, including exhaust and adjusted to standard temperature and atmospheric pressure at sea level. Known as SAE Net. Advertised HP ratings dropped 30% the year it changed.

The chassis dyno measures wheel horsepower which exposes the losses through the transmission and rear axle. A RWD manual transmission car will lose 15%. Automatics, 20% to 30%. Your non-lockup convertor would be closer to 30%. So that 7.2 liter beast is pumping close to 450-500 at the flywheel!

Could easily be an overbored 428 FE series V8

WOW. didn’t know that and I think that only a very few know that over here.

The chassis dyno measures wheel horsepower which exposes the losses through the transmission and rear axle. A RWD manual transmission car will lose 15%. Automatics, 20% to 30%. Your non-lockup convertor would be closer to 30%. So that 7.2 liter beast is pumping close to 450-500 at the flywheel!

Chassis dyno, that was the name.
I agree, though I might think that Your estimates might be a a tad on the low side. It could also explain the very stable, but hard running idle (vibrations).

Could easily be an overbored 428 FE series V8

Yes, but who knows. That’s for future investigations.

If you could find the casting numbers on the block, that would tell you definitively what the engine is or at least started it’s life as. Same thing for the cylinder heads.

I have just now found out where to find the casting numbers on the FE engines and to translate them, but I can’t find anything on the MEL engines. Are they the same?.
I don’t believe this is the original engine.

On the MEL engines it’s supposed to be on the block, below the exhaust manifolds. Don’t know if it’s right or left. It might also be behind the alternator/generator.

may or may not be helpful to you.

Put a vacuum gauge on it and let us know what kind of vacuum it pulls while idling in neutral or park. That will give us a clue whether it’s a stock or street cam ( btw, hot idle on that car should be set to 600 in drive.) Your transmission has two drive ranges, I don’t know how Mercury labelled them. One of them starts in 1st and upshifts at normal speeds through second and third. The other one starts in second and doesn’t shift to third until 75 mph. The transmission takes type F fluid only. No dexron or mercon. Get used to some of the new smells. Engines ran horribly rich back then, and there was no PCV system to suck blow-by back into the engine. With the age of this car, I’d expect plenty of blow by.

My car in high school was 62 Ford Galaxy. As I recall it had a t-shaped release handle. It was sort of spring loaded affair. Some twisting of the handle was involved I think. I don’t remember any vacuum assist involved. Be sure give all those parking brake moving parts a good lube, should return them to very smooth operation. And prevent the unfortunate turn of events that happens when the parking brake mechanisms gets stuck in the locked position.

The real gross horsepower of those 426 hemis was way over 500 horsepower. The first 426 henis sold to the public were race hemis, the street hemi was developed later. A race hemi was the engine that propelled a car to a closed course record at 230 mph average for the lap and prompted Nascar to impose restrictor plates for the super speedways. You don’t do that with 425 hp, not even met 425/

George,the vacuum release was only on Mercury and Lincoln.

George,the vacuum release was only on Mercury and Lincoln.

Our family wasn’t flush w/cash enough for Lincolns or Mercurys. Standard transmission Ford 2-door coupe about the best we could do. The neighborhood kid’s family cars were more fancy. They’d joke when riding in our Galaxy about the lack of arm rests in the back seat … lol … 220 223 CID as I recall, straight 6, 3 on the tree. 2-doors was fine by me, no trouble for a little kid to get into the back seat. But thinking about the situation now, I believe my mother wanted a 4-door, b/c every time we’d all get into the car to go somewhere, what with my brothers and sisters crawling through between the door and the front seatback to get to the back seat, my dad would almost always say as we drove away “4-door cars, ugh, that’s just 2 more doors to causes rattles”.

Maybe car doors rattled more in the 1960’s. My 27 year old Corolla has four doors and never had any door rattling problem from any of them. My 47 year old truck has 2 doors, no rattles from the doors anyway.

I can’t imagine the purpose for a vacuum assisted release for the parking brake. I don’t see any advantage to adding that complexity. What am I missing?