I am in the market for a medium size cruiser. Engine size would be between 900-1300 cc and I would like a Star/Yamaha, Kawasaki, Honda or HD. Does anybody have knowledge to a good forum to discuss motorcycles similar to this type of forum?

A coworker has a Yamaha motor cycle and loves it. He took all the Yamaha badges off his bike and no one can tell the difference between his bike and a Harley, and he got it for a bit less cash than the Harley.

Actually I have been leaning towards the Star/Yamaha. it has gotten real good reviews. I had the same idea of shaving the badges and this winter removing painted items and give it some personality. The bad thing about bikes is (other than HD) the color choice are boring black or boring something else.

I think he told me HD was getting rid of blue and one of the red colors they have, not sure which one. He was saying if he keeps his bike, he’s gonna take it from a tan and silver to a metallic green or something to help make the chrome stand out more.
If you know someone who does painting, or ask the salesman if he knows anyone who paints vehicles and see if they’ll just paint over the factory color. If it was me, I’d go for a cobalt blue and white combo, similar to the BMW logo

Painting is no problem as I am a manager of a body shop. My problem would be picking colors since the sky is the limit. There are plenty of cars with great colors and I have access to any of them. Also if there is a color that I cannot get a paint code from my supplier can get a pic of it with a prophet gun. The picture is downloaded to thier computer and the formula is faxed to me. It’s pretty cool.

If you want something that doesn’t have a boring paint job, I recommend the following, although you might need to make a small sacrifice in displacement. These have 750 CC engines.

These Honda Shadows have 52 degree V-twin engines and shaft drives. What makes the 52 degree V-twin stand apart is that it has an offset crankpin, which makes it run smoother than most V-twins. They have three valves and two spark plugs per cylinder.

yeah, sky’s the limit, usually. So break that barrier down and go hog wild: 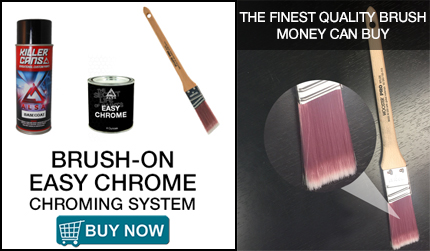 I have always liked the looks of the Shadow Aero but IYO, is a 750 under powered or not. I realize this would be ones idea but I have not ridden one.

Have you spent much time riding anything?

Some new cruisers are really huge, and quickly become hard to handle in crowded cities. They are fine out on open highways. Harleys are very popular theft targets, and they tend to have high maintenance demands. But, Harleys are cool, and Japanese bikes are not, so you have to decide how important cool is, too. Harleys cost nearly twice what an equivalent Yamaha will be. So, it depends where you live and where you ride and what matters to you.

Engine size is another similar issue. If you want to ride alone (no passenger), and you are not going to go from Omaha to Des Moines for lunch, then 750 ccs is plenty. If you and your passenger are not big people, 750 is fine.

You have to ride them and feel them out.

Whether or not these bikes are underpowered depends on how you plan to ride. They actually have 745 CC engines, not 750. At full throttle with no windshield, the one I rode in stock condition would top out at 95 MPH. With a windshield, it tops out at between 85 and 90 MPH. It’s 60 to 80 MPH times are better than most econoboxes and I have had no trouble keeping up with people on larger displacement bikes. That’s good enough for my needs, except I need a bike that can hold me, my gear, and a passenger. If it was just me and the gear, I never would have traded up.

Find a dealership with a used one in the showroom and ask to test ride it. Personally, I would opt for the Shadow Spirit. It is a little lighter, maneuvers a little better because of the taller and skinnier front wheel, but is the same as the Aero otherwise.

While not a cruiser, it is medium sized and a HD: the XR1200. Sportster-based, probably the best-handling Harley ever made (not including Buells, of course):
http://astonishingbikes.com/wp-content/uploads/2008/04/harley-xr-1200-450x317.jpg

Were I buying a bike, I’d be giving this one serious consideration.

Harley Davidson has problems in many of its models with the rear cylinder overheating. They have known about this problem for a long time, and their current solution is to deactivate the rear cylinder in stop-and-traffic and while idling. Personally, I don’t consider that a very good solution, and I would stay away from this one if it has this “feature.” It shouldn’t be impossible for H-D to build an air-cooled engine that doesn’t overheat. If they can’t, they should install a radiator.

Well I did it, I bought, back in late summer an 07 Star/Yamaha Vstar 1300 Tourer. 46 MPG, windscreen, hard lockable leather covered bags, fuel injected, floorboards and plenty of fun with a simple wrist twist.

Don’t care for the color, two tone silver but flawless. It’s to nice to change.

congrats on the purchase