I have been hearing a squeaking Nosie coming from my truck 2000 Dodge Dakota 3.9l v6 RWD.

I checked coolant and the reserve tank is empty. I then starting investigating and could see lots of coolant from the rad cap down. It appears to be leaking and getting on the belts causing the squeak. It is hard to see but I think the most of the coolant is coming from around the water pump. I am going to wipe things off and take another look.

I thought it might be the radiator cap but looking it over it seems to be dry until just below that,…but also hard to see based on the flinging of the coolant from the belt.

Question is: How long should I drive the vehicle before checking for leaks? Will the coolant begin leaking right away or should I drive for 15 minutes and then check? I want to make sure it is the water pump before replacing. I also looked at hoses which seem to be okay.

Be sure the radiator is filled and the overflow tank has enough. Leave the rad cap off and start the engine. Fill the rad back up if the level goes down. Once things are in order, put the cap on. Let it idle and look for the leak. Maybe a drive of a mile or two to get it fully warmed up and pressurized, then back home and look for the leak again.

Who knows where the leak is and how bad it is and whether it’s about to get worse? So be cautious about any driving until you get this fixed. Low coolant and low oil are bad for engines. (While you’re at it, check your oil.) Good luck!

Try wiggling the radiator fan to see if the water pump bearing has any play and that’s causing the squeaking.

Because if it is, the bearing can fail with catastrophic results.

Another way to track down a leak: borrow a cooling system pressure test kit from O’Reilly’s or wherever. Pump pressure into the radiator and let it sit overnight. In the morning, if the pressure has fallen, look for the leak.

I would not drive the vehicle, just let it idle until operating temp. the water pump has a weep hole on the bottom. it is probably coming from there. when you replace it or fix whatever is leaking make sure you bleed the air out of the system, or it will overheat.

I drove the truck for about 10 minutes and let it sit idle. I looked around and can’t see any leaks. I can see old areas of antifreeze but nothing definite leaking as it is running. I think the belt is slinging it around causing areas to show antifreeze splatter and little tiny pools.

The only thing I do see is in the area of the ac compressor which is right below the water pump about center of the engine bay little almost rain drops of antifreeze flying upward.

I shut the engine off and continued to look for a definite leak. Just the little rain drops sizes amount flying upward.

I grabbed the fan and I can move the pulley on the water pump. Not a lot of play but it does wiggle back and fourth some.

I dry moving the other pulleys and they don’t move at all.

Does this sound like the water pump…No overheating. I am thinking the water pump has a small leak causing these droplets. And I assume there should be no movement in the pulley at all like the others?

And the last thing over the past few months I have noticed a grinding noise at times. Perhaps this has something to do with the pulley and water pump.

My other car (Corolla) had similar symptoms to what you are experiencing, coolant going down very slowly, seemed to be leak in water pump area based on small drips underneath the car next AM, but try as I may, from every visual angle possible, I could never actually see the water pump leaking. Finally got fed-up and decided to just replace the water pump on a flyer. Unlike truck, water pump replacement on Corolla pretty big job b/c have to remove engine mount & timing belt covers. Once I got the mount off & covers removed then I could see the water pump was definitely leaking.

I grabbed the fan and I can move the pulley on the water pump. Not a lot of play but it does wiggle back and fourth some.

The pulley won’t move much with belt tension on the pulley. Remove the belt and check for play again.

I have replaced my water pump. I have not refilled with coolant yet.

Question: Someone posted to make sure to bleed air out of system? How do I do this?

Can’t speak to the 2000 Dakota, but for my 50 year old Ford truck I raise the front wheels so top of radiator is high point, remove the radiator cap, and idle the engine until hot coolant starts pouring forcefully into the radiator from the top hose.

How to Bleed the Coolant System Properly - Expert Tips - 1A Auto

I would recommend going to a parts store and buying one of these cooling system fill/bleed funnels. 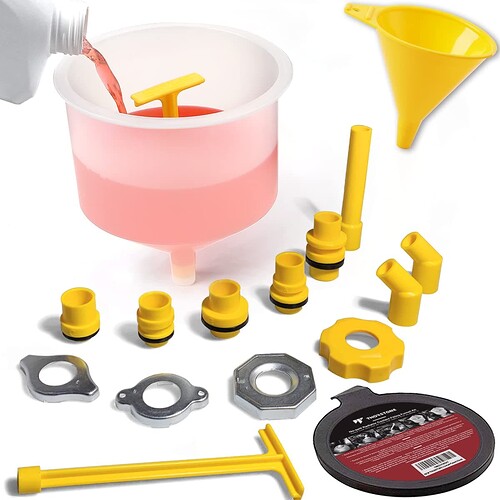 Those instructions from 1A are good as far as they go, but:

Put a pan to collect overflow and spillage under the radiator. That stuff is poisonous to animals and people and should not be left sitting.

Know the system’s capacity, put in 1/2 that amount of pure undiluted antifreeze. Then start adding water. You’ll end up with a 50-50 mix or a bit stronger, which is good.

After you’ve driven and let it cool down overnight, take off the rad cap and top up again. You can use plain water because you already have enough pure coolant in the system. Check and top up the radiator and fill the overflow tank so the level is between its Min and Max marks. The next couple times you drive and let it cool down, repeat.