So, further troubleshooting my '79 Celica’s idle/poor mileage problems.
Disconnected alternator/fan belt to see if noisy bearing at fault. Nope, they alternator and fan are free.

I hooked up a timing light, and found the timing to be way late. Like 5 degrees after TDC , but steady

Distributor is still making quite a racket. Is there any way internal damage to the distributor could cause the late timing (what I’m hoping for)?

Or does this necessarily mean that the timing chain jumped a tooth on the cam gear? Is it possible that a distributor could temporarily seize, resulting in seizing of the camshaft while the crank is still turning, and cause the timing chain to jump?
(I periodically check chain tension by taking the dist cap off, turning the crank by hand, and watching the rotor move, almost as soon as I turn crank.)

In the FSM, toyota mentions different colored chain links that go over an index mark on camshaft sprocket. Should I pull the valve cover and check?

turning the crank by hand, and watching the rotor move, almost as soon as I turn crank.)

Turn the crank in the normal direction, and then turn it in the opposite direction and see how far it can move before the rotor moves.

No. Damaged dizzys advance the timing because springs break.

Is it possible that a distributor could temporarily seize, resulting in seizing of the camshaft while the crank is still turning, and cause the timing chain to jump?

No, the more likely scenario is the dizzy would seize and break the cam or timing chain.

Check it as Tester suggests. I’ll bet the chain is sloppier than a Twizzler.

Tester: I turned the crank cloclwise until I hit “0” TDC, then turned counterclockwise. Rotor started moving when notch on crank pulley was at 5, maybe 6 degrees BTC (there’s an index mark at 8 degrees)

That indicates a stretched timing chain.

Well, then time for the repair shop. The FSM says to remove the cylinder head to get to the timing chain cover. I’ve heard some stories (unfounded) of people getting around that, somehow.
If the distributor is making noise, I still have to change that out, no? That one I could do myself. But a timing chain ? -I’m way over my head.

I’ve never had to remove the head to replace timing components @tom418. And I’ve replaced quite a few timing chain guide sets on R22 engines. The driver’s side guide was plastic on some models and they failed resulting in the problems you describe and can be replaced with only the valve cover removed. Maybe someone here has access to the Toyota shop manual and can provide the factory details for that work. 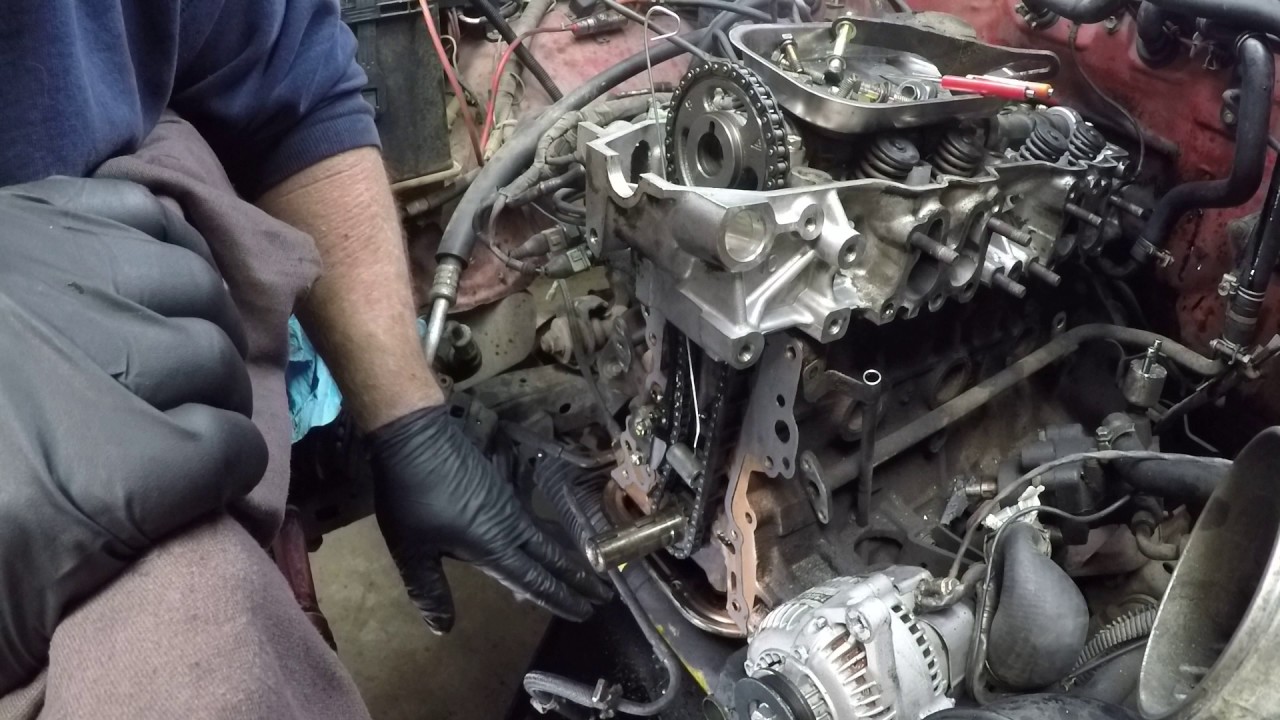 I do have the FSM for the '79 Celica. They say to remove the cylinder head then remove the timing chain cover. It was on another website (ToyotaNation) where a poster or two mentioned that it was not necessary to remove the head. I tend to take what’s posted there with a grain of salt. But sometimes the FSM has unnecessary steps, and boy I hope you’re right!

And don’t you know that, according to the FSM, you have to drop the oil pan? Three years after I changed the pan gasket myself. That involved lifting the engine, disconnecting the idler arm, etc.!
They better not have to remove the A/C compressor. Just fixed A/C myself two years ago also.

When this is over, I’ll have to drive this car on Sundays only, and sparingly. It’s a really fun car to drive, looks great, unlike my Avalon. But it’s time for semi-retirement.

BTW: I have metal chain guides, and it’s a double row chain.

The double row chains with metal guides never showed up as a problem for me @tom418. But if the tensioner is failing the front 6-8 pan pan bolts on each side can be loosened and the front cover can be removed with a little prying down on the pan and with a small screw driver on each side to allow slipping the timing cover back it can be reinstalled.

Well, time for a new chain. I pulled off the valve cover. I found that instead of two links straddling the index mark embossed at the top of the cam sprocket, I have one link riding on top . Clearly the chain jumped one tooth.

I still have to address the distributor. One of the springs for the advance weights in no good, the rotor is sluggish to return after being spun to advance position, etc. I contacted the facility that RockAuto deals with, and was told they can rebuild it: “make a list of what’s wrong” I don’t want the dealer or independent shop charging me for that too.

Mustangman: The chain was very loose on the driver’s side. I stuck a screwdriver between chain and metal guide and I could move it sideways almost an inch!. If I had plastic guides, they’d have been chewed to bits. 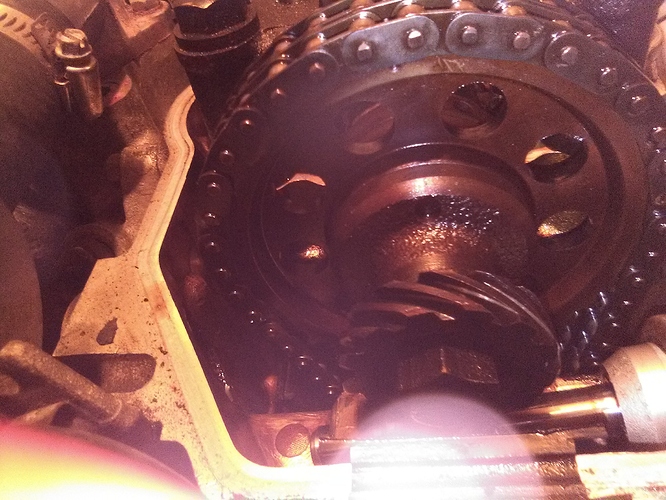 BTW: My chain did not have the “two bright links” mentioned in the manual. But I still think that I should have two links straddling the index, no? 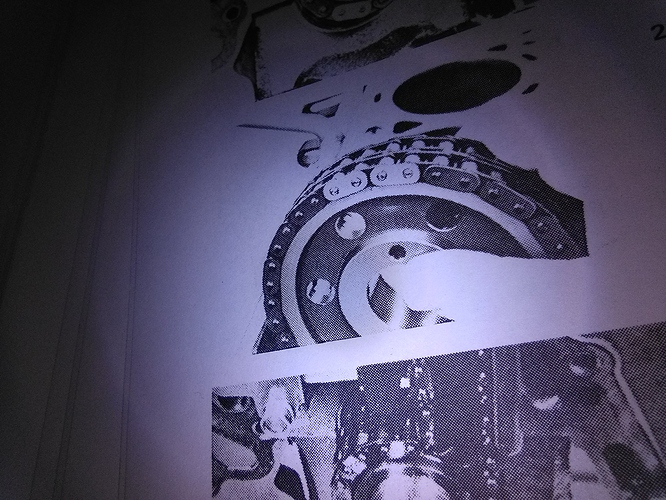