Automatic transmission is shifting at high rpms about 10% of the time. Someone’s as high as 4k+ rpms. Shifts easily when it does shift (does not slam in gear, the shift itself is smooth). Will shift easily when I manually upshift with no problems. Seems to downshift okay. I live in northern Ohio, so it is cold and wet. This had been going on for 2-3 months. I had a flush and filter change about 30k miles/2 years ago. No dipstick to check level, but I don’t have any fluid leaks (I park in garage and would notice fluids on the concrete).

What year and milage?

Is this a new thing or is the car new to you and you think it is shifting too high?

Is the check engine light on?

I have owned the car since new. This is a recent issue. No check engine light.

Given this maybe the engine is getting a little tired and the shift point increased to maintain acceleration?

does it feel as if the engine is “floating” or “holding” at that higher RPM before it shifts? Like driving a manual trans and holding rpm at a high level for a moment before you decide to shift.

I would say it is holding at the higher rpms before shifting. Tired engine combined with the winter/cold gas mix does make sense. I do burn some oil through the rings too.

The crank position sensor is a common problem for these Hyundai to not properly shift.
Here is a post in the Hyundai forum describing the problem: 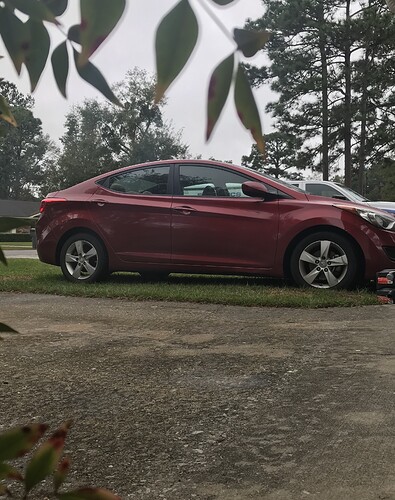 I’m having some issues with my 2013 Elantra. After a lot of research. I have a idea of what the problem might be. Problem is in the morning I crank up the car and leave my house. Everything is fine and drives and shift like it should. After about 5...

I do burn some oil through the rings too.

How often do you need to add a quart?

A bad crank position sensor should throw a code though right? I’ll scan for codes on Thursday, but I thought of a code was produced, the church engine light would come on. Cheap part regardless. I might just swap one out to be sure. My problem is not nearly as severe as the linked post, but cheap and easy enough to give it a go.

That’s not oil loss enough to worry about. Most manufacturers aren’t concerned if the oil loss is less than a quart per 1000 miles.

They is what Hyundai said before my warranty expired. Oil burn had actually improved with some oil treatment. Pretty sure I got some of the carbon off the rings.

You do not have an oil problem .

I found this. it sounds like your problem. but it would probably give you a transmission code.

A bad crank position sensor should throw a code though right?

oddly enough, it is more common than you would think that a Crank Position Sensor would go bad and not throw a code. I can probably count on one hand the number of crank sensor codes I have seen in my years of doing this- and my Ford/International engines used to go through them a lot.

I replaced the crankshaft position sensor. This one was functional. However, it might not have been the problem. Test drive seemed okay, but when giving hard gas, I got a engine light on and out. Code was for cylinder 1 miss fire. I replaced spark plugs about 40k miles ago.

I swapped the cylinder #1 &#2 coil and plug/deleted codes ( to see if misfire changes cylinders). Have not got another code to come up. At least yet. However, seems to run rough at high rpm when getting on it hard, like at 4000-4500 rpm.

I have noticed an exhaust leak that smelled rich. Could not locate it on ground so took it to a shop. They identified the leak on the front flex pipe, which also has a O2 on sensor on it. The mechanic seems to think the exhaust leak is making the O2 sensor make too rich of a fuel mix and that is causing my problems. Unfortunately, he wanted $900 to replace the flex pipe, so I’m going to tackle that. Pretty big markup for a $100 part.