The first national show apparently was broadcast on October 31, 1987. That might be a clue anyway. 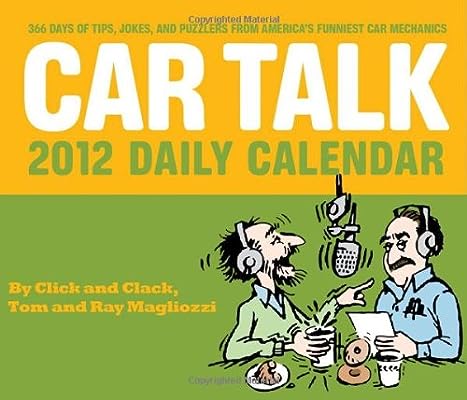 In this illustrated calendar, the hilarious hosts of NPR's Car Talk radio show—Tom and Ray Magliozzi—share automotive tips, tales, puzzlers, jokes, and trivia for every day of the year.

This is by no means authoritative, but…the train may have already left the station.
On last week’s program, someone phoned in about a problem that he had experienced with a rental 1999 Pontiac. Since not even Rent-a-Wreck keeps cars that long, I have to believe that this particular phone call was…I’ll be diplomatic…“archived”.

While there may in fact be more “new” shows in the pipeline, it appears that the boys have not stopped recycling old program segments during their run-up to the last show.

In October, Tom and Ray will record their last completely new episode at WBUR, but the radio show on NPR will continue, and their weekly newspaper column will be published in the Boston Globe’s Automotive section every Saturday starting September 29.

Hmmmm. I very well might have to subscribe to the Saturday/Sunday Globe… I wonder if it can be sent to the DC area via snail mail? Does anyone know?

“I wonder if it can be sent to the DC area via snail mail?”

Of course it can. All newspapers have a provision for mail subscriptions.
However, most newspapers also have e-subscriptions nowadays, and it is very likely that you could receive this publication electronically.

Why is the date of the last show such a state secret? Trying to slip one by your devoted listeners? Come’on guys. Let us mourn, or celebrate, with dignity.

Was listening to the last 5 minutes of the show in the car this morning. The guys were talkng to the father of a listener who had confessed to running her dad’s car without oil in it. Sounded like a fun story so I logged into the site to listen to the rest of the show (and the beginning of the story) and the segment was totally MISSING. It had been replaced by another confession story, and another call by Tom and Ray to a guy named David who didn’t even answer the phone. So, not only are we getting re-runs, they are piecing them together willy-nilly.

I noted with interest that Click and Clack referrenced Felix Baumgartner - so at least part of the show is pretty current.

@LesMoore … here in the San Francisco area at least, the show broadcast Oct 21 matched the podcast call for call, and which also matched this website’s description summary of the calls. The final call (the one broadcast and the one on the podcast) is where Tom and Ray call David, but he doesn’t answer, and involved David’s sister borrowing his car and it got accidentally damaged. Nothing on the show was about someone running her dad’s car without oil.

I expect that you heard a different episode of the show in your local area. Perhaps a prior taped episode was broadcast for some reason. Or more likely, your local NPR station is having a contribution period, and the local stations often broadcast special Car Talk episodes for contribution weeks. Special Car Talk’s are provided to the local NPR stations with extra segment breaks for time for the local station to remind folks to donate. these are completely different from the normally broadcast show most of us receive.

While we all know that some or all of the calls now are from the archives, I’ve noticed a few other show components which suggest that C&C must be continuing in some fashion. First of all, at the end of the show when they announce that listeners can download a podcast, they give the number of the podcast, which yesterday was identified as #1243. Maybe they spent a couple hours recording three years worth of podcast numbers to splice in?

Also, in the past month or so I don’t recall hearing a rerun show opener segment - correct me if I’m wrong. This week for example, Tommy’s first comment about problems with their own cars seemed fresh. Then again, immediately following that - comments about sports - sounded familar to me.

And this week’s puzzler was unfamiliar to me although the previous one about the sign they had painted on their garage was almost certainly a rerun - I know I remember a puzzler about that sign, but don’t remember it completely. But are the the puzzler winners also repeated from the the first time that puzzler ran, or are they announcing a new winner second time around?

Another part that seems like it’s freshly recorded is the listing of underwriters at the beginning. There are probably other examples. So I’m thinking that they may be planning to come in to the studio now and then and record some of that stuff to be used for weeks into the future.

Good points @WesternRoadtripper. I think you are correct on all accounts.

But I do believe I’ve heard this week’s new puzzler on the show before. Anybody else remember or have looked in the puzzler archives for it?

The recent puzzler about Jimmy’s house had a different winner in the podcast than in the puzzler archives on the web site. So they are at least re-recording the puzzler answers every week so they can have new winners. Otherwise the contest would be a sham.

The next to most recent show had a segment where a prior caller comes back and they decide if they gave the right diagnosis. It was the problem where the driver’s pants were getting dripped on with some reddish substance, and the guys said it was the speedo-cable. There was quite a bit of discussion here on that call. Like I say, on this recent show, the caller came back and said the guys were right. Both the original call and the followup may be from a prior year though. Hard to tell.

I’m also confused. They still list the phone number. Are they too cheesy to edit that out? If they are old shows, they still re-edit them.
So I called. If the number rang, they were still on. If it was disconnected, they’re off. Or didn’t pay the bill. A brilliant move! But the results were inconclusive. I tried 4 times, and got a busy signal each time. So it seems like they are still paying for the line.
I don’t understand why they are being coy about it. I don’t mind repeats. I’ll listen for the cheap jokes and giggling!

Try calling during the week, not during the show. Segments are not taped live on Saturday mornings, never were. It’s like reality TV. It’s at (least partly) scripted.

If you’ve been paying attention, most of the calls in the last few months are from owners of 90s-era cars, so it’s safe to say that there’s some recycling going on.

I called the toll free number today (1/23/2013) and they played the “we are not taking calls now / you are listening to an archive edition” message.

The show we heard on January 26, 2013, mentioned Manti Te’o by name, so that was definitely a newly recorded bumper by Ray. The inauguration was also mentioned, but I suppose that could have been recorded four, eight, 12, or more years ago.

So are Tom and Ray still going into the studio, or just Ray, or what? Enquiring minds want to know!

Also, are the shows mostly complete rebroadcasts, or are they cobbled together from multiple episodes? Would have been less trouble to just drag Tommy by the collar into the studio, or put a mic in his house.

Whatever — thanks for the effort. They’re a national treasure.