Just for fun. How many vehicles?

Just for fun, how many personal vehicles have you owned? If you own(ed) a vehicle lot or dealership, those vehicles don’t count. Just your personal motorized vehicles. If your folks bought you a go kart as a kid, that counts as long as it was yours. What were your 2 favorites if you could have a “do over”? What was the strangest if purchased or “hand made”? What was your 1st road legal vehicle you owned. So…
#1 - How many vehicles?
#2 - 2 favorites?
#3 - Strangest, if so?
#4 - 1st road legal vehicle owned?

65 owned. There are probably about 10 more I can’t think of at the moment but that happens with my “old man” brain. Lol. It’s all good.

Oops. Forgot about 2 motorboats and a motorcycle so 68.

Strangest was a 1960s something Toyota Corona (yes, for you kids out there it was a Corona. NOT a Corolla.) 4 door with a radiator from a Ford 8N farm tractor in it. The hood was open about 4 inches and tied down with coat hangers. I would put the radiator back in the tractor in the winter to plow the snow.

My 1st road legal vehicle was a 1964 (I think) Ford Falcon with 3 on the tree. Her name was “Myrtle the Turtle” because I had a HUGE “Mach Turtle” sticker/decal on the back window from Turtle Wax. She had that “going fast while standing still” look.

Anyway, I look forward to your posts.

Strangest is probably the MR2, only because of the mid-engine layout that makes everything bizarre and hard to get at.

First road-legal one was a tie, because I acquired them at the same time. A 1984 Toyota Tercel 3-door hatch. Fantastically reliable car. It’d probably still be running today if an idiot hadn’t run a stop sign and t-boned me. And the other was a 1989 Dodge Caravan SE. White with burgundy interior and pinstripes. Drove that in high school a lot because I had band stuff to haul around. That car was sure popular with the ladies (no it wasn’t).

Lifetime 25 cars. Favorites were a 59 Impala 2 DR HT, a 68 Roadrunner, a 69 Superbee, and a 59 Corvette.
Most unusual; sort of. A 59 Morris Minor in black with a huge yellow daisy painted on the roof. A 59 VW Bus in which I painted the dash gold metalflake and covered the entire interior in bright lime green shag carpet. A sight to behold in daylight…and someone with perfect vision bought it from me not long after.

10 Motorcycles lifetime. Mostly Harleys, a few Triumphs, and one BMW bought new.
Rarest. a 1944 U model Harley flathead and a 1950 Harley FL Panhead cop bike. I have owned the former since 1974 and the latter since 1976. Cars and bikes come and go but those stay with me for eternity and the U model is the mostest funnest (butchered grammar) motorcycle I have ever owned even though it was the slowest of the entire lot.

I like the “MEEP, MEEP”. Great car. My friends dad owned a Plymouth dealership when I was in highschool. His dad GAVE him a Superbird when he got his license. Was the fastest car (obviously) in school or entire town for that matter. The VW sounds cool too. I had a VW Camper bus once at one point. Was an awesome vehicle! And a Morris Minor. Wow! Coolness! I had a Simca I just remembered. Small rear engine. Never got it to run though.

Not that many but more than I thought.

Was your Caravan the turbo 5 speed manual? Those are quite rare from what I understand. Funny… a soccer mom van that had stick that could do 12’s in the 1/4 mile. Can imagine seeing a mom burning rubber from a stop light with the groceries in the back. Lol! I’ve had a Caravan and most recently a 2014 Town and Country. Loved them both. Just got rid of the T&C. Had 181,000 miles on it. Never had even 1 problem with it except a “ticking” started at about 160,000. Probably a lifter but it just kept going. When it comes to the spark plugs on the back side, everything from the top of the intake has to come off just to get to the plugs. That, the miles and plugs is why I got rid of it before getting into all that mess not knowing for sure what the “ticking” was. She served me well.

My 2 favs on your list are the Coronet and Ambassador. I had a Dodge Polara that was originally a local Sheriff’s car. Red and white with 2 red lights on the deck behind the back seat.it was definitely a runner! He he… Studded snow tires at the end of winter, back up on the dry pavement to about 20 MPH, SLAM it into 1st… Smoke and carved gouges in the road for 20 feet. Yeah, I was bit abusive on it. Funny though, it took everything like that in stride. I’ve had 3 AMC’s. The only ones I really remember anything about was a green hornet and a Matador. Not sure what the 3rd one was.

. My girlfriend at the time had a Pacer then a Gremlin. My friend had a green Gremlin with some massive V8 in it. Talk about a small car that would lay some rubber down! That thing was a beast! 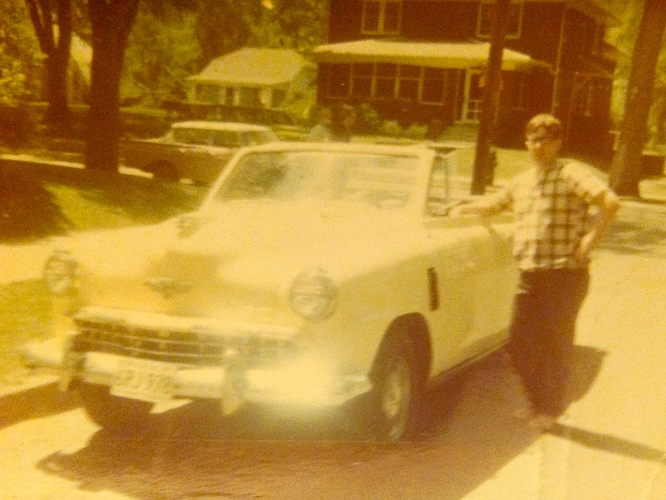 My 2 favs on your list are the Coronet and Ambassador.

GREAT list! Had to copy and past in my notes to look through. My favs are “hands down” in 1st place the Studebaker, then Cutlass (one of my bucket list cars) always Loved the square front lines that are familiar with the 66 Chevelle, Dart… push button trans? The Pontiacs, the Plymouths due to my Love for the Polara then the T-Birds… 5.0’s? … because they were like the “real” Cougars with rear wheel drive. When the new front wheel drive cougars came out I refused call it a real Cougar. Honorable mentions would be the Scout and Pinto… I haven’t seen or heard of a Pinto in MANY years. My friend had one. We used to race on the road in our local cemetary, bad boys, I know. He in his Pinto and me in my Fiat X-19. Took me through the “way back machine” on the Pinto. Lol.
Again, great list. That was a hard one to pick from as you can see how many I picked.

I’ve had a number of 318 equipped vehicles… Just remembered another I forgot about. A Dodge Aspen with a 318. In my opinion it was the best gas engine Dodge ever made. I had a yellow Dodge single cab 318 1/2 ton with a 4:10 rearend (4 speed manual I think) pickup that the Alabama highway dept converted to a 3/4 ton for whatever reason. I bought it with VERY low miles and used it for a very long time pulling various travel trailers around the country. I lived on road for a time with my job. It never let down. As I recall, none of my 318’s ever had a problem.

too many cars to type!

Was your Caravan the turbo 5 speed manual?

I wish. It was a hand-me-down from my folks, and neither of them cared about cars. It was the 4-cylinder, 3 speed, 2-Boring model which did 0-60 in “eventually.”

My 318 had two problems: it developed an oil leak from the pressure sensor and later it needed a valve job. Dad knew a guy who would do it but we never got around to having it done so I sold it and got the Ambassador.

My favorites were the 1976 Porsche 914 2.0 and the 1977 Honda CB400F motorcycle. Both lots of fun to drive. My second favorite car for handling was a 1970 Austin America. It had an anemic engine and automatic transmission, but boy, was it fun to drive. Low center of gravity and wheels at the corners, the stability was excellent. My favorite was taking sharp turns at 25 or 30, breaking the back end loose and pulling through the turns. I scared the bejeezus out of a friend with a Firebird 400 doing that. He was in the back seat and didn’t put his seatbelt on. He bounced from side to side as the tail wagged. Other than that, the newer they are, the better I like them. My current ride is a 2017 Accord I4. It’s a little noisy, but handling is good, it’s very comfortable, and acceleration is very good for a 4-cyl commuter car.

My favorite bike of the 3 was the Suzuki GS1000E. Loads of torque, good top end power. A nice simple, uncomplicated, clean “standard” bike. The Kawasaki was similar but with luggage boxes and a fairing. Its twin cam engine was a bit weak on torque but it had tons of horsepower. I would gladly have traded a little HP for torque.

There was a lot to like about the Tempest but the brakes were crap and it had no power. But it was my first car…

Austin America… Had to look that one up. Of course I’ve heard of Austin and British Leyland but that specific “for export” car I’ve never heard of. It looks like an old Fiat but back then they all did I guess. “Learn something new every day.” Here is what I found on the web for others that didn’t know about this car…

The Austin America was a special version of British Leyland’s two-door Austin 1300 Mk2. Approximately 59,500 of them were made exclusively for export to the US, Canada, and Switzerland. They were sold from 1968 to 1971.

From what I was told, (but never looked into) was that my VW camper van had a Porsche engine in it. Not sure if that’s true and I don’t remember who I heard it from but it was a great engine. I know I say, “It had a great engine” about a lot of vehicles I’ve owned but I am pretty anal about maintenance though. Now, in my teenage years I did abuse many of my vehicles so I was doing… lets call it “maintenance” often… Ok, I’ll tell the the truth. They were repairs. LOL! Really though, I have always been one to go over as many nuts and bolts, fluids, filters check for ware and tear… doing real maintenance and upkeep. I guess I had to. I was a normal teenager with a lead foot. It does seem like vehicles of “yesteryear” could take the punishment and abuse much better than vehicles of today. Maybe due to difference in body on frame vs unibody, cast iron vs aluminum and REAL metal vs plastic.