our pull-r-parts yard uses 2 old rims welded in a TEE fashion and used to place 4 of them under cars. now they use 1 in the rear and place it under rear muffler so it crunches it quite well. i picked up some rims yesterday and looked at a few donor cars as my kid needs a new muffler. last yr i found a new muffler by chance so i bought it. 12$ which is cheap but its rare to find them. of course i sold it. how do they support cars in most yards? similar? 3 points or 4?

Our local pick your part uses 3. With all the fwd cars, that works fine.

Mine doesn’t use anything… They make you go find rims and tires to prop cars up with. Which is a stupid idea because people throw nice wheels and tires under all sorts of vehicles…ruins perfectly saleable wheels…

I think four but can’t recall and haven’t been to one in years. At any rate, geeze, new mufflers are kinda cheap. Of course it’s been a while since I bought one but think it was $19 with no rust. Call me chicken but I wouldn’t get under one of those cars regardless of how many wheels they had. Maybe I’m claustrophobic or something but did have one kinda come down on me once so I don’t like being under cars.

I think the place I visit just uses the rims by themselves, vertically oriented (as they’d roll down the road) either 3 or four to hold the car up. Where the rims met the car, depended on the car and the person who placed them. Usually some part of the car body or chassis was sitting on the top of the rim. I didn’t notice they were welding two rims together, but that seems more stable, seems a good idea. The rims-as-is support method looks a little wobbly to me, but it must work ok. Lots of people crawling under the cars. 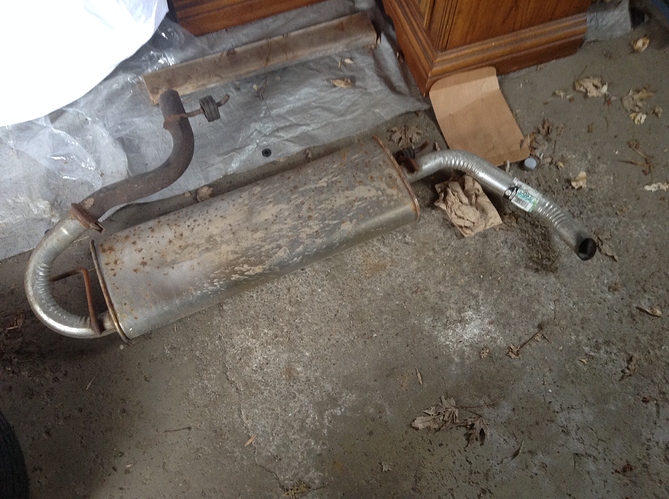 Sweet. What a deal!

We have a yard in Traverse City that cements 4 or 5 inch pipe in the ground and puts another pipe accross from the two verticles at two feet high and straddles the car between. Car is lifted 2 feet. Nice.

We have a yard in Traverse City that cements 4 or 5 inch pipe in the ground and puts another pipe accross from the two verticles at two feet high and straddles the car between. Car is lifted 2 feet. Nice.

Yep it is. Parts are generally half of new and they have most everything.

Yep it is. Parts are generally half of new and they have most everything.

I’ve used them, but haven’t been there since the