Is this the car of the future?

I read that article too. Am wondering how it scored so high with the obvious range limitation. Isn’t that part of the driving experience…" range anxiety" ? There is a potential filling station for EVs on every telephone pole. It’s just getting enough out there to make it worthwhile. At $89 k a copy, there won’t be a big demand for these stations.

As neat as the Tesla is, the company’s only making money by selling zero emission credits to other carmakers. More government-mandated shell games, end result is money out of our pockets:

Tesla collects windfall from rival automakers due to zero-emissions credits

Tesla is bringing in millions from other automakers desperate to buy credits it gets from states for selling green cars.

Everyone got their hands in the pot and nobody bothered to wash their hands before and afterwards. :-))

Yes @drrocket it makes sense to conserve resources but it also makes sense to make use of those resources that we have available to us. What is the point of not using what we have for the benefit of mankind? Are we not a better world than 500 years ago because of our progress?

As neat as the Tesla is, the company's only making money by selling zero emission credits to other carmakers.

Do you know how many YEARS Amazon was in business before it even made ONE DIME?? How about Fed-Ex??

E Musk on CNBC Sqwakbox.with Jim Cramer (31May): I think I heard Musk say that a 30% (?) of the production will be shipped overseas. Western Europe need this car.

@longprime Yes, there are a lot of very wealthy people in Europe who do not travel long distances. When I’m over there and tell my relatives and friends how much we trave, like 25,000 miles a year for some, they can’t comprehend it. The train service is superb in Europe and very few travel long distances except on some vacation trips. Air service is also a lot cheaper now.
A quiet, non-smelling luxury car would overshadow (no pun intended) a Rolls Royce over there.

Most travel over there is city and short commutes.

European car makers should be going all out for a EV vehicle either by developing or licensing. Going 100 miles in GB, can transverse England.

It’s always puzzled me why EVs aren’t more of a hit in Europe.

European cars have generally smaller engines and stick shifts and as result their economy cars, smaller than ours, usually, get phenominal mileage at a very low purchase price. There are also a lot of diesels; in France and Italy 35% of new car sales are diesels. The goverments put a lower tax on diesel as on gasoline, easy to do considering the $7 per galon or so fuel cost, which is mostly tax.

The Tesla appeals to the elite there, and does not reflect what the average European driver aspires to.

I’m thinking more of a Leaf-sized car, or smaller. Wonder if that would get around some of the big cities’ bans/fees for driving (like London)?

Note that HAMMACHER SCHLEMMER does not have a real photo of their “super midget”.

Years ago the City of Amsterdam, which is very eco-concious, started a rental business with small electric cars. Although a good idea, too many ended up in the canals, and it was discontinued. Now they have a bike rental organization, where for a small fee you can pick any bike and drop it off at you destination. A very neat way to get aound.

Very small EVs might have a future in European cities on a temporary rental basis, since most people have very limited parking and have only one vehicle. 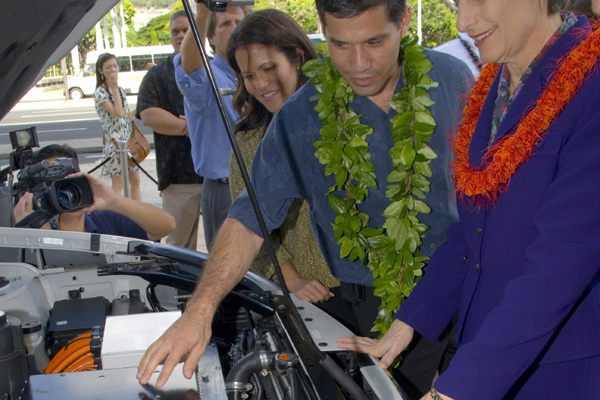 There are plenty of ideas out there, some that seem to make sense. Not all work.

Maybe the dinosaurs will come back.

Before I’d call the Tesla “The Best” I’d need to see more repair and reliability history. Until there’s hard data from several years of daily use, I think the Tesla is – hmm … let’s just say an “interesting” car. In any event, I don’t see a car priced that high making much inroads of any volume into the American car market. So I don’t see the Tesla as the car of the future.

But some version of alternative power source besides gasoline will be the future for cars, and in the near term future that alternative power will almost certainly be electric. Whichever manufacturer can produce an econobox that most everyone likes, is inexpensive to purchase and inexpensive to drive, is highly reliable, safe, similarly priced and marketed to middle class America as are the Corolla or Civic, that car will be the car of the future.

But it ain’t here yet.

That reminded me. About ten years ago, some very right brained folks in St. Paul started up a free bike program. They had about 300 yellow bikes if I remember right that you could just grab one and ride it where you wanted, then return it. It was a forgone conclusion that it took about a week and all of the bikes were gone.

Learning from their neighbors, Minneapolis started up a program with I think green bikes or something a year or two ago. This time though you rent for a small fee, and need to use a credit card and drop it at one of the drop off sites. I think it it has been working OK.

@Bing
"drop it off at one of the drop off sites"
How does that work for economical bike commuting if the site is a way from destination…like take a taxi the rest of the way ? ;=)
@GeorgeSanJose
Practical and cheap enough EVs are here now ! They just haven’t figured a way of making them as profitable for all those in the infrastructure that supports the internal combustion motor. Until then, EVs are nothing more then a conversation topic and a novelty.

Bike rentals have exploded here in Wash. DC.
In the central city the racks are less than ~10 blocks apart.

@Docnick,subSahara has an extreme abundance of energy in the form of tropical sunshine-getting the horse to drink is another story,perhaps if we were to invest some money in SSA,we could garner some good carbon credits-Kevin (I’ll say it again,to many many chasing ,that which is scarce,only going to get worse as others try to raise their standard of living and whocan fault them for doing so?)