Is this crazy or what?!?

Well, I would really want to see a caliper measurement before I decide I have to change that rotor out

I’d never seen a rotor like that until I realized the whole outside surface is gone leaving the air fins. Yeah time for a couple new ones, plus pads, etc.

Many years ago I visited my daughter who was in college about 450 miles away. She was driving a Pinto and said “I think there is something wrong with my brakes.” When I got the wheels off, there were no pads, just the backing plates that were bumping over the spider that had been between the inner and outer ventilated rotor.

I looked at it and said, well, at least it wore evenly.

I’ve seen a couple very close to this in my local pick-ur-part junkyard. There are thousands of pics like this on the internet. Like this one; 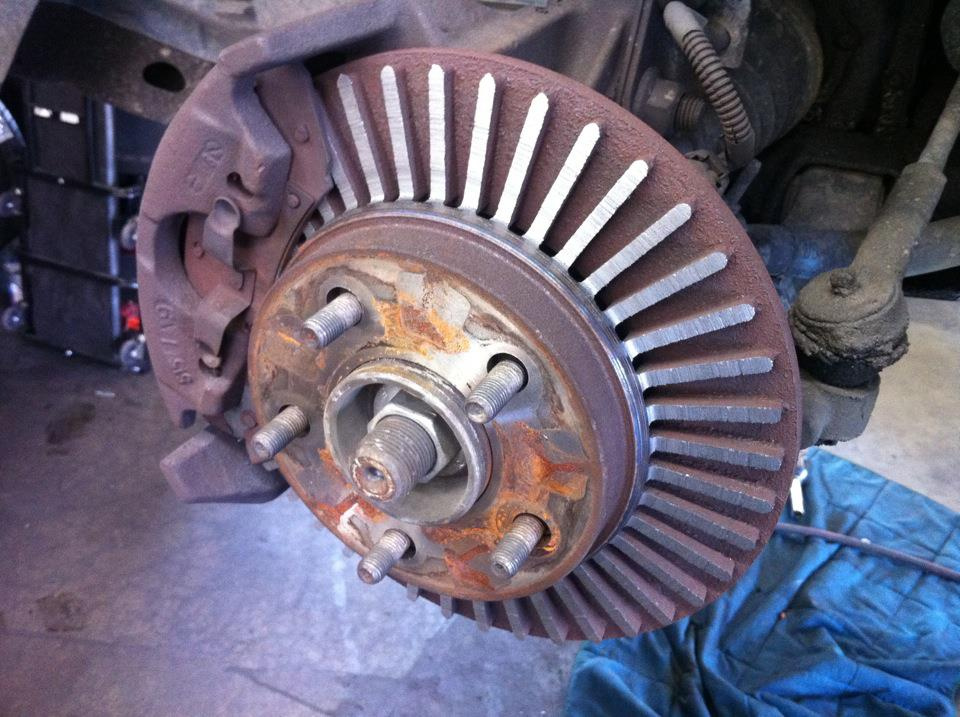 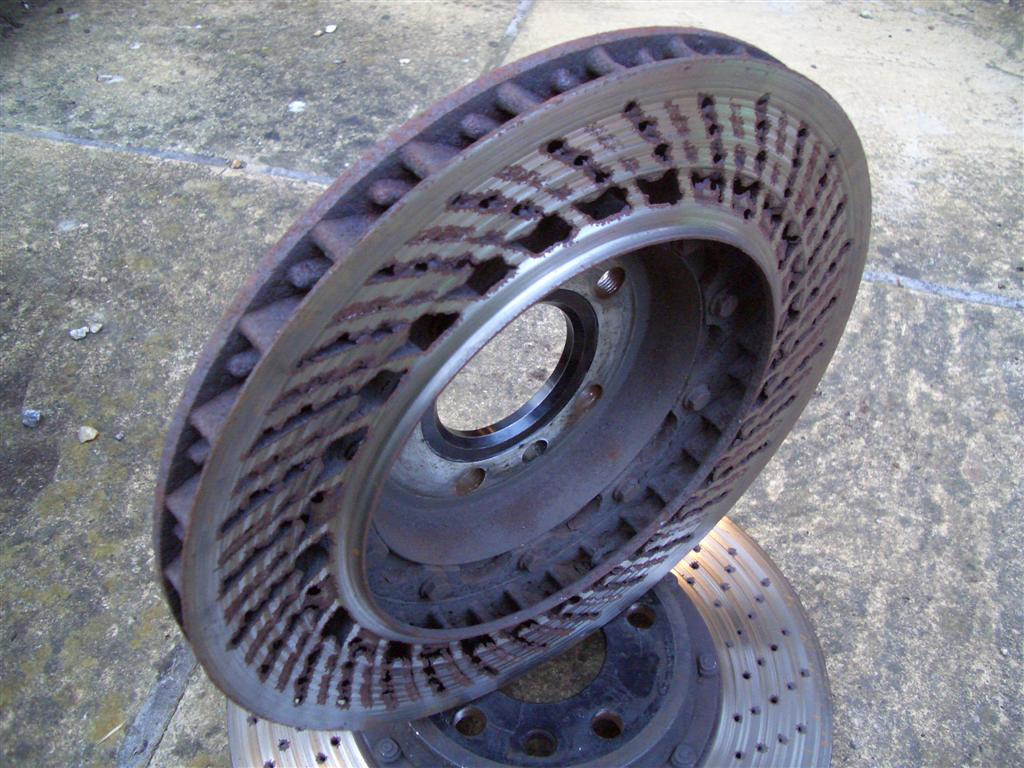 This is deja vu for me. Last July an 88 year old woman pulled out in front of me from a bank. I slammed on the brakes hard and both of my front rotors suffered damage. I ended up replacing both rotors, brake pads and rubber brake lines on my 2002 Dodge Dakota SXT 4X4. I guess rotors age just as any other part. The woman was pulled over and cited for several infractions. The bank called the police and gave them her license plate number but they had already pulled her over for running a red light. She was really out of it due to her medication. She later sent me a check for $100 to pay for the parts. I held on to it for a while but finally cashed it. The worst part, for me anyway, was that I had my 9 year old great niece with me. We were on the way to the swimming pool but that never happened. She loves to recite the events to anyone who will listen including all the sounds she remembers. They include screeching, bangs, thumps and siren sounds from the wrecker and the police. No one was injured but I still get a nasty feeling in the pit of my stomach when I think of what could have happened. Jaylynn just refers to it as her “summer adventure”, I dug the rotors out of the scrap pile and am adding the pic to my post. 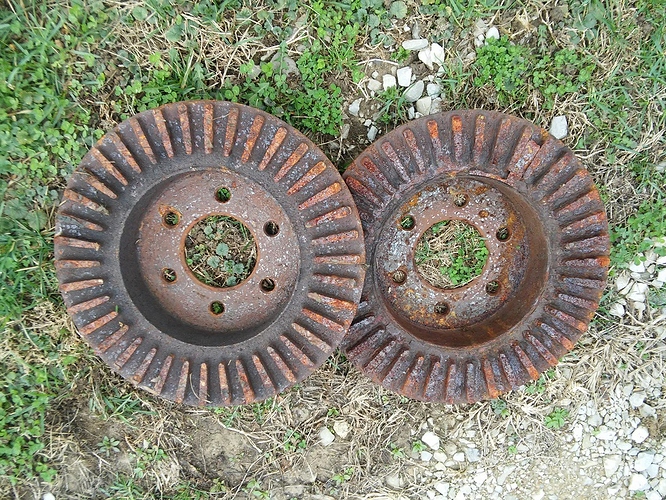 Pretty unlikely those rotors were damaged by the hard stop - they were already well past their expiration date.

I’ve driven street cars on race tracks with stock brakes. Had to change the brake fluid after, but the rotors showed no signs of coming apart. When you see the vanes, you know the rotor is just (beyond) worn out.

Good evidence for a common sense visual brake-part inspection once every year or two.

Good evidence for a common sense visual brake-part inspection once every year or two.

Absolutely true, but by the time a regulation requiring it comes out of committee the “check the brakes for wear” requirement becomes bloated to cover the entire vehicle and enable any mechanic so inclined to fail any car over three days old for the sole purpose of revenue generation, and the system to get them checked finds a way to become corrupted.

A few cases-in-point:
I once had a Toyota pickup truck. Pickups in NH are not required to have rear bumpers. I bought mine without, and made a rear bumper out of a 2X8 backed by a 2X2 steel angle iron and mounted to the frame with 2X2 steel angle irons. I even cut a relief in the 2X8 to enable the license plate to meet the visibility requirement. For some years I had no problem, until I stopped at a different place for inspection. They rejected the truck because the rear bumper didn’t comply. Turns out that IF a truck’s rear bumper is wood, it must be hardwood, must be one piece, and must have a steel backing plate of a specific dimension. The inspector showed me the spec. I pointed out that if it didn’t even have a rear bumper it would be compliant. He agreed. So I had him cut the bolts holding the rear bumper on, throw the bumper in the truck bed, and give me a sticker. He did, whereupon I drove home and bolted the bumper back on… and never went back to that shop.

I stopped at a quickie lube place to get an inspection. Pressed for time… long story. Every time a car pulled into the line, a shop guy would place an orange cone behind it, which I thought was strange. I sat in line and watched a car get rejected for “dirty oil” and another get rejected because the light in the trunk was burned out. I backed over their cone and took off as fast as I could.

I’ve also (before computerized systems) stopped at a place that checked my wipers, checked my headlights, and gave me a sticker. I never even had to get out of the driver’s seat.

I realize that your comment was only about checking the brakes being a good idea, and not about mandating it. And I agree with your recommendation.

California checks nothing except emissions. NOTHING. Every 2 years you get an emissions check up. That’s all. The first days of rain in the Fall cars slide off roads, exit ramps and anything else they are on, with bald tires no one knew about while the roads were dry. Burnt out lights, bad brakes, no license plates at all, no problem. A State with 35,000,000 people with no safety inspection program at all.

California checks nothing except emissions. NOTHING. Every 2 years you get an emissions check up. That’s all.

California’s approach to vehicle regulation amazes me. My son, who lives in Santa Clarita, has entertained me with numerous stories about the screwed-up California system. The last time I was there my son pointed out countless cars without license plates. Many people don’t even bother to register their cars, and California authorities don’t seem to want to be bothered.

my son pointed out countless cars without license plates. Many people don’t even bother to register their cars, and California authorities don’t seem to want to be bothered.

My understanding is there’s some kind of loophole that can be taken advantage of so you can drive all you want and no need to register the car or ever get a license plate. In my experience just observing at stop lights, maybe 5% of the cars on the road have no license plate on the rear. Front license plates are even more rare. There’s a car parked in my neighborhood for the past 10 years, parked right on the street most of the time, and driven daily, never has had any license plates displayed front or rear.

Calif does seem to be a little unbalanced as to what they’re concerned about. Seems you are dead either way, by air pollution, or faulty brakes. Or a gunman shoots you and even with witnesses escape scot-free b/c they have no license plates .

No license plate? Do what people do in Florida… Print a bogus temporary tag on your home printer and hang that on the car.

I got a toll road bill for a temp tag registered to my car but on a totally different car in another county… while the temp tag was still ON my car!

When you buy a new car, or when a car that’s never been registered in California before is sold to you by a dealer, the dealer puts a temporary registration form in a plastic envelope that’s stuck to the lower right corner of the windshield. They are then supposed to submit the necessary paperwork to the DMV, which sends you a set of plates in the mail. Meanwhile you drive around with no plate at all. Every other place I’ve ever been they issue temporary printed plates that go on the car in the regular places, and have clear expiration dates. California car dealers didn’t want to be bothered. I guess. Why plates can’t be issued by the DMV at a special dealers only location, every day, I don’t know.

People don’t put on the plates when they show up, because then you have to pay tolls, parking tickets, you can hit and run, use the car for crimes. People who get cars sometimes never register them and just drive on paper dealer ad plates forever. I’ve driven to the Highway Patrol for a VIN inspection on a salvage restoration motorcycle with no plates, had it inspected, and asked the CHP guy if he wanted to see any of the paperwork I had gotten from the DMV, and he just told me to forget about it. Nope, it’s fine. No plates at all.

Your neighbors will turn you in for running your lawn sprinkler too long.

Your neighbors will turn you in for running your lawn sprinkler too long.

LOL, yeah, in southern CA that’s true. My son told me about that. He also pointed out that he can’t wash his car at home.

He also told me he needed to fill his inground pool with his hose. Here in NH we pay a potable water tank truck to come fill the pool. My son told me that service isn’t offered in southern CA. Weird.

I always used tap water to fill my pool, and it was an in ground 28,000 gallon pool. I drained it about 2’ to winterize it then put the cover on. It took a while, but I was too cheap to have a truck deliver water. Maintaining the pool was a lot of work, especially at both ends of the season, but what a great place to be in the summer.