Is the Mercedes-Benz Metris a Minivan?

Hello everyone! This is my first post on CarTalk.

So on YouTube, there was a video by Doug DeMuro (not a huge fan of his channel by the way) called “Here’s Why the Mercedes Metris is the Worst Minivan Ever Made”.

The video comments had mixed opinions and points.

So, is the Mercedes-Benz Metris actually a minivan?

So, is the Mercedes-Benz Metris actually a minivan?

Who cares ? It is leaving the US anyway because of poor sales . And if someone wants it that is their choice. I will not flag you but since you linked a You Tube channel someone may just do that.

Oh, sorry for posting a link. I am new here.

Standing beside one… doesn’t seem so mini to me…

Agree with Doug, it is a minivan.

For your last point, why do you think it is a minivan? Would you also call a Ford Transit, Transit Connect, Nissan NV Series, or Chevy Express a minivan as well?

Seems like a matter of semantics. Just curious why this is of interest to you?

For your last point, why do you think it is a minivan? Would you also call a Ford Transit, Transit Connect, Nissan NV Series, or Chevy Express a minivan as well?

What’s the point, and how much of the bet you made do we get? That has to be the reason for this ridiculousness. You made a bet with someone that it’s a mini-van and you came here to ask us to prove you right? Otherwise, who really cares. Full size, compact, SUV, CUV, it all the classes, acronyms change almost monthly, Hell back in the ‘70’s a Cutlass was midsized. Now an Avalon (almost the same size as the Cutlass was) is a full size.

The EPA classifies the Metris as a special purpose vehicle, not minivan nor van. 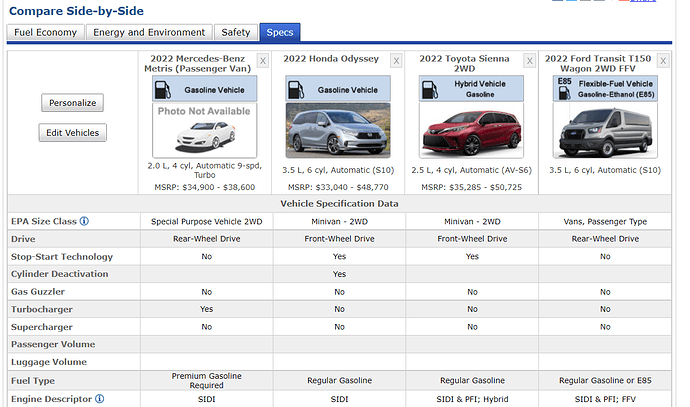 It’s closer to a modern Chevy Astro or VW van which competed with the Dodge Caravan and other minivans, A vw specialist in Seattle has offered the Metris converted to a camper as a modern alternative to the VW Westphalia’s they rent out. Otherwise it was aimed more at the commercial market.

I can’t think of a Transit as anything but a shop truck or work van even though some options allow you use them for passenger hauling.