I read an article at CNN on line this morning. A CNN Business reporter wrote that GM will begin production of the Silverado/Sierra EVs by MY2024 at the same plant that is currently used for the Bolt. You may remember that all Bolts are recalled for batteries that might catch fire while recharging. This recall is for about 143,000 Bolts and has shut down all new production to fulfill replacement needs. GM only announced conversion of the production line to EV pickup production and said nothing else. GM seems to have a habit of messing things up. See the article linked below. 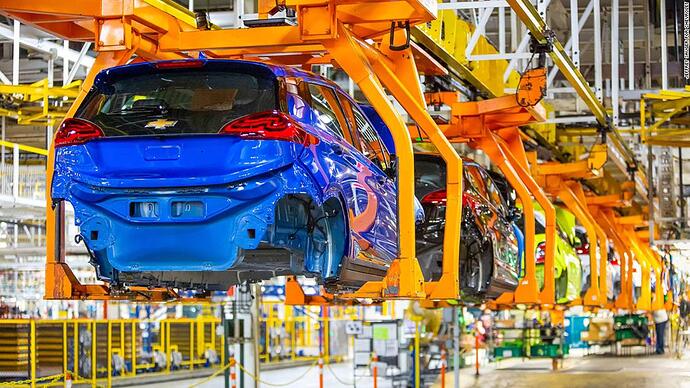 Time could be running out for the Chevrolet Bolt, the electric vehicle that only five years ago was positioned as General Motors' best chance to overtake Tesla.

GM seems to have a habit of messing things up

I agree that is a motivation to get the pickup EV in production quickly, but it says nothing about continued production of their first EV. They only sold 25 completed Bolts during the last quarter of 2021. That’s probably the biggest reason to walk away. The new GM EVs use a different battery system than the one on the Bolt, in case anyone didn’t read the article.

The new GM EVs use a different battery system than the one on the Bolt, in case anyone didn’t read the article.

Yes, but it is difficult to overcome negative publicity, and after hearing about all of the Bolts that self-immolated, I would imagine that many potential buyers would cross them off their shopping list w/o researching changes to the Bolt’s battery system.

I agree. The demise of the Chrysler Pacifica PHEV followed a similar path. They never overcame the recall for catalytic converters damage due to improper cylinder deactivation/activation. The injectors still squirted gas into the cylinder after the plugs shut down, causing raw gas to flow into the exhaust system for a short while after going to the hybrid battery. The gas would ignite in the exhaust ahead of the cat and cause spalling inside it. Even though the exhaust glowed red, there weren’t fires reported. The problem was solved after reprogramming the fuel management system, but sales never recovered. The Pacifica is still available, but not in the PHEV form.

The Bolt was useful to GM. It isn’t useful anymore so it likely will not appear in the same form nor with the same name.

A new model will appear with the new batteries and new underlying architecture is my guess. At a higher price as well, since it seem apparent that the low price road for EVs is not a particularly successful road to follow.

A new model will appear with the new batteries and new underlying architecture is my guess. At a higher price as well, since it seem apparent that the low price road for EVs is not a particularly successful road to follow.

+1
… or, maybe with the same chassis and some new styling, in order to convince buyers that it’s a totally-new vehicle–even if it isn’t. But, there is no doubt that GM wants to be able to produce EVs with a higher profit margin, so their actual strategy remains to be seen.

133,664 total sales including the EUV seems like a very expensive experiment. There were sales in Brazil, Mexico and South Korea. Maybe they will move production closer to one of those markets. It might fit nicely into their former Daewoo product portfolio.

Yes, but it is difficult to overcome negative publicity

Except that cars seem to be in Bizarro World. I mean, you’d think no one would ever buy a Ford again after the Pinto debacle and yet here we are decades later and the company is still going strong. Even my dad bought a Ford back in the 90’s, and he was very aware of the Pinto memo and what it implied as far as Ford’s attitude toward not killing their customers.

Heck, even in modern times, why is anyone still buying Teslas? Not only are they killing people by fooling them into thinking the cars can drive themselves while they literally play video games, but Tesla has also gained a reputation for underhanded sleaze tactics with their customers, such as selling used Teslas listing certain features, then remotely disabling them after the sale because “the previous owner bought that, not you.”

Actually it’s really not just cars, but products in general that operate contrary to popular wisdom. A central tenant of laissez-faire capitalism is that the free market will correct itself; bad-acting companies will see sales drop off and will either reform or be run out of business. In practice, that rarely happens.

No one stopped buying Scotch Tape when 3M poisoned entire cities either.

Even big favorites are guilty of underhanded business dealings. Toyota dragged their feet on unintended acceleration, and it cost the dearly. They also stole the hybrid technology that allowed them to corner the hybrid market. They were busted in that one too. Do I have it in for Toyota? No, my point is that all, or almost all, of the big auto manufacturers have done things they aren’t or at least shouldn’t be proud of. It’s hard to make a righteous purchase when there aren’t any virtuous choices.

It’s hard to make a righteous purchase when there aren’t any virtuous choices.

Yep. And it gets even harder when you factor in the fact that companies aren’t exactly eager to reveal the bad things they’ve done. It’s not like you can choose not to patronize a place for dumping toxic waste and creating a superfund site if you don’t know they did it.