When I first got my driver’s license - a long, long time ago - to obtain the best gas mileage we were advised to drive 55mph. But times have changed: technologies have improved, the national speed limit has changed, and cars’ designs have probably changed to keep up with new laws (including the new national speed limit). For a regular, gas powered car, is 55mph still the optimal driving speed? How do we know that (that is, where do the numbers come from)?

Also, is it different for different cars? Can I find out what the optimal speed is for someone driving, say, a 2003 Pontiac Bonneville?
Thanks.

The optimal speed, anymore these days, is the speed at which everyone else is driving. If you’re trying to be a gas miser on the freeway, even semi trucks will pass you. You run the risk of causing more accidents than anything else

Yes, we all want to save money, but if driving at…55 mph…or 60 mph…or even 65 mph means that you are moving significantly slower than the rest of the vehicles on the road, you are putting yourself in imminent danger of being rear-ended by a vehicle moving much faster than yours. That would pretty much override any cost advantage that you might have gained by driving at 55 mph.

That being said, I have spent some time over the past 23 months or so, monitoring the mpg readout on my 2011 car. By comparing the average mpg readout to actual hand-calculated mpg, I have found the onboard readout to be extremely accurate, with an “optimistic” reading of less than .25 mpg.

That being said, when I switch the readout to “instant mpg”, instead of average mpg, I find that the road itself has more to do with the car’s economy than my right foot does. If I am driving at a steady speed of 55 mph on a level road, I will usually get an instant readout of ~30-31 mpg. However, if there is an uphill grade that is encountered on that same road, the instant readout might drop to as low as 17 mpg.

Similarly, I can drive at a steady speed of 65 mph on a level road and get an instant readout of 28 mpg, but once there is an uphill grade, that suddenly goes down to ~15-16 mpg.

In other words, the grade of the road is going to have more of an effect on your mpg than anything else, so I would suggest that you keep safety paramount, rather than trying to wring that last fraction of a mpg out of that tank of gas.

First, there is no national speed limit. Speed limits are state controlled. In the early '70s, the feds did threaten to cut off the federal highway funding for any state who chose not to change their speed limits to 55mph, but that’s not a change enacted legislatively, it’s just the usual financial means of controlling that which the feds don’t control through law.

Cars do have an optimal driving speed range, but only that. And it will be different for different cars…and for the same car under different driving environments. And there is no such data. The mpg testing is performed to federal standards to EPA designed test (see link)
http://www.fueleconomy.gov/
however the test protocol is the same for every vehicle. And they test objective is not to find out what the optimal speed is for each vehicle, but rather to find out what each vehicle will get in real-world conditions.

Bscar2; I’ll have to stop, wait for everyone else to come along and see how fast they’re driving.

This hypermiling couple found their VW diesel got the best mpg at around 48 mph. But, as others have pointed out, don’t drive slower than is safe and legal. 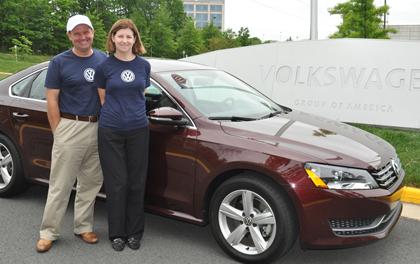 Couple gets 84 mpg in Passat diesel on real roads

55 was never the ‘optimum’ speed. It was just a lower speed, and mpgs typically increase at lower speed. So it was a quick fix to (slightly) lower fuel use. Not worth the time lost, in my opinion.

+2 with my friend from Texas.

The optimal speed as far as mpg depends on gear ratio’s, size of the motor, weight of the vehicle, and aerodynamic profile. A boxy vehicle creates more drag and would do better at slower speed. 55 was a good speed for big trucks and boxy cars. It might even have saved some gallons of gas when 55 was the national speed limit. I’m glad to see the double nickels fade into history and hope they don’t come back.

I find pulling a horse trailer much over 60 mph uses a bunch of gas so I keep the speed between 55 and 65 when towing. Otherwise I find 65 very easy on me, the car, and yields acceptable mpg on my cars. 70 and 75 speeds don’t bother me if the roads are designed for them. Big 18 wheelers at 75 start to look like a safety issue to me.

I think that the 55 speed limit came from cars built in the 1940s. My first car was a 1947 Pontiac which I bought for $75 in 1962. In those days, most driving wasn’t on interstate highways. I made the 350 mile trip to the university where I attended graduate school in this old Pontiac and I drove around 55 miles per hour. Someone once bet me that the car wouldn’t go over 65, so we “opened it up”. It had a top speed of 78 miles per hour.
By the mid 1950s, cruising speed had increased for many cars. My dad had a1954 Buick that I bought from him in my second year of graduate school. That car would go over 80 miles per hour in second gear and I am sure it had a top speed of well over 100 mph. I usually cruised around 65 mph in that car.
Back in the early 1950s, the speed limit in Ohio was 50 mph. That was considered a proper highway speed.

If by optimal you mean the best engine performance and mileage, that will vary by car and engine and there is no one size fits all.

With my Lincoln, driving at 55 MPH makes it appear to be a dog and it takes about 65 or better before it starts coming into the power band; unless the Overdrive is turned off.
The same was true of a BMW motorcycle I owned. At 55 it was a pig in 5th gear and only started to breathe at about 70 or so.

The faster you go, the more energy it takes to move the car. That energy is coming out of your gas tank…

Older cars with poor aerodynamics, benefit most from lower speeds. “The older we are, the better we were” syndrome clouds our memory into thinking that older cars did better at 70 mph then 55. Few actually took the time to test the difference back then or use their mpg function display present on many cars today. If a Lexus of today does better at 55 mph, it’s tough to imagine an older car wouldn’t as well. Even the older police cruisers we drove did better at lower speeds. Caddyman is absolutely right. We aren’t talking about Indy cars and there is no substitute driving at moderate speeds.

Unlike a boat which can climb it’s bow wake and begin to plane at higher speeds and allow some crafts to become more efficient, a car carries no such advantage…

Back in the gas shortage of the 70s, one of the big oil companies sponsored a contest to see how many miles per gallon could be obtained from a gallon of gas. The winner achieved about 1600 miles from one gallon, and 2nd place was in the 1300 mpg range.

The vehicles were small (go-cart size). The speed they achieved optimal mileage was in the 12-15 miles per hour range. Even at those speeds, the vehicles that got the best mileage all had fairings to reduce wind friction.

As Caddyman noted, the faster you go, the more energy it takes to move the car.

Driving at 55 may or may not give you the best gas mileage. It depends on the car. Most cars it probably will. But driving 55 in many parts of the country will get you killed. Around Boston during rush-hour…driving even 70 is way too slow (if traffic is moderate to lite).

It takes experimintation time to determine yours.

But even though the true best mpg will be a snail’s pace you really must decide on an average best when considering time for the trip as well. ( I personally have zero desire to take four hours to drive to Albuquerque )

I’ve read more than once that the best fuel economy is most likely at the lowest speed you can go (without lugging) in your highest gear. I guess that would be around 45 MPH or so in many cars.

It never was an optimum speed , more a politically motivated one that got revoked when enough people got angry .

When I go vacationing on the Eastern Shore of Maryland I drive mostly on secondary roads at 45-60 mph with few stops and little AC use.
My last 3 cars got the best mileage under those conditions. Better than zipping on the interstates.
My Matrix got 38 mpg this spring.

For comparison my last road trip from DC to Chicago and back averaged 33 mpg on the interstates at 60-75 mph.
p.s. Although that was with 3 vs 2 passengers and constant AC use.