I'm Wondering If This Plug Is Off Location, or Unused 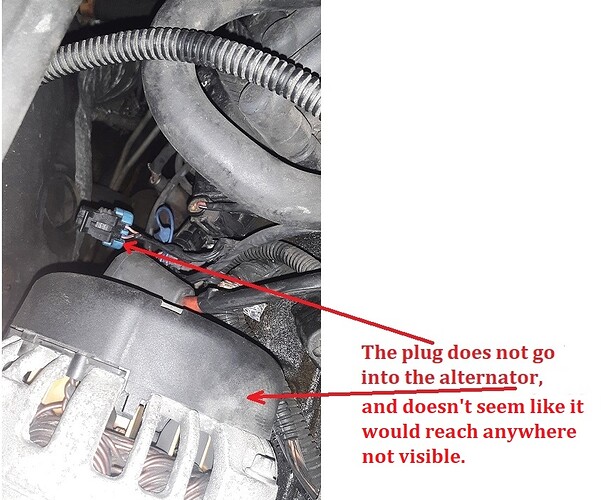 My 2000 Buick Century 3.1 L Custom has an unattached watertight type 2 lead plug between the alternator and the ignition coil pack. It does not go into this alternator, plus there is already another plug connected to the alternator, at the bottom. I have never had to rotate the engine so I never have had a real good look for a socket this plug may go into. The wire leads aren’t very long, so I don’t think it could go anywhere I couldn’t see from the top of the engine. The car has had the transmission out twice by two different garages, due to failure by the first garage and them not making it right before the warranty on the work expired. So the 2nd shop to work on it may have left it unattached if it in fact does go somewhere. Since that tranny work, the car has been idling a bit rough and the engine sometimes rolls, like a carbeurated car did when the mixture was rich. Poor mileage also, im lucky if I get 300 miles to a tankful. No trouble codes though. But might anyone know just what this plug is, where it goes, maybe unused now but for a different style alternator, like a high output one? But if the plug is off location I’m wondering if this is what makes the car idle a bit rough and makes the engine roll sometimes at idle and slow driving speed.

cant tell for sure, but it looks awful clean to not have been plugged into something for the last 22 or so years.

Any top of the engine work done recently? That is the alternator in the picture, so I’m not sure that this could reach to something transmission related, but ya never know. My best guess is that it goes/went to something and is now unhooked.

Car makers make wiring harnesses that can be used in the different models of their vehicles.

So one vehicle may have an unused connector while another vehicle has a purpose for that connector.

I’d show it to that second shop you mentioned and ask them.

So one vehicle may have an unused connector while another vehicle has a purpose for that connector.

Agree my old 90 F150 has a couple of unused connecters like that.

Not only connectors not used by our particular car but some are used for testing when you do have a problem.

It’s probably for an option your car doesn’t have, like AC, or Cruise Control. Or something to do with a transmission type yours doesn’t use. My Corolla has an unused engine compartment connector very similar to what yours looks like. It’s for an optional AC compressor. My Corolla doesn’t have the AC option, so that connector isn’t used.

Check the connector to the power steering pressure switch; 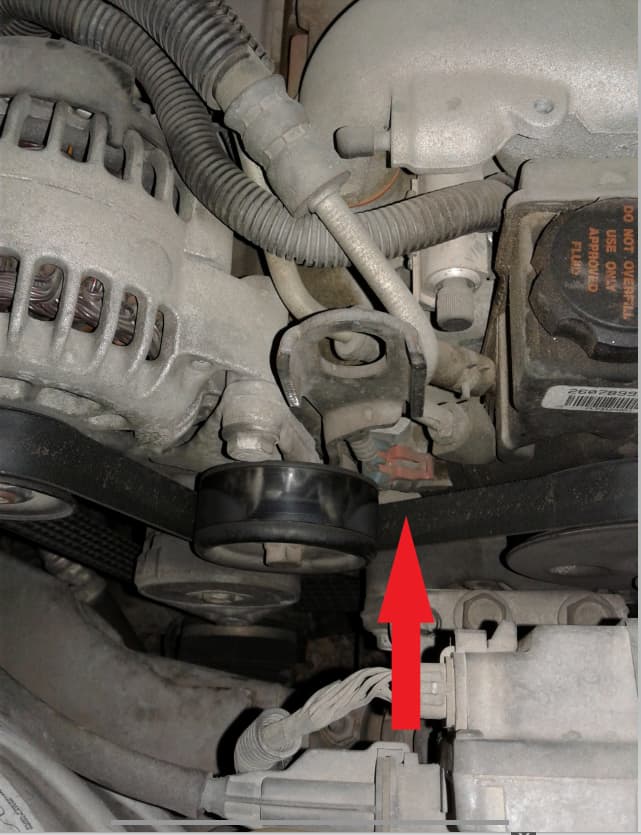 Poor mileage also, im lucky if I get 300 miles to a tankful.

That is a good driving range for an old V-6 midsized car.

I have a few unused connectors in my old pickup. I had a short in the wiring harness that lit the dash, etc. I had to take off the dash and cut every wire until I found the culprit. It turned out to be the wire for the glove box light, which I don’t have, but Forerunners do.

That’s used so the computer can increase the idle rpm to avoid stalling the engine (from the extra load of the power steering pump) when you turn the steering wheel to extreme angles in low-speed, tight parking situations. OP, are you having any problems with the engine stalling at idle?

I had to take off the dash and cut every wire until I found the culprit.

That sounds fun … not … lol … Reminds me of when my battery sprung a leak & battery acid decanted from the battery top and ran down the inside of a major cable bundle on my Corolla. Eventually it made its way to a wire splice and promptly ate it in half. I forget now what stopped working but whatever it was I couldn’t drive it until fixed. Thick wire, maybe the alternator. Anyway traced it, cutting the cable apart along the way, to what might be the most difficult spot in the engine compartment to access. Never rains but it pours eh?

George San Jose, I am not having any idle problems. Also, I haven’t seen any empty socket anywhere within the reach of that unused connector plug, but I have been looking for a power steering system sensor socket . And soon I would like to rotate my engine forward and have a good look under the coil pack for an empty socket, as unlikely as that may be.

Rotate the engine ? Have you not asked the last shop that worked on it if you even need that plug? If this 22 year old vehicle goes , stops and all the functions work I would not even worry about that plug.

I have been looking for a power steering system sensor socket

Every vehicle with power steering has the power steering pumps loads the engine at idle problem, but not every manufacturer uses the same method to mitigate. On my 90’s Corolla for example the power steering pump has vacuum switch built into it. There’s no electrical connection involved. A hose from the air cleaner goes to that switch (on the PS pump) and another hose goes from it to the intake manifold. When the steering pressure gets high enough the switch opens and allows cleaned air into the intake manifold, boosting the idle rpm.

The vehicle’s wiring diagram would probably tell you which type you have.

The power steering pressure switch is attached to the pump just below the high-pressure line, see the picture in post # 8.