If you own an old VW Beetle

… and you want to accessorize it, look for one of these old devices that might still be lurking out there in the marketplace: 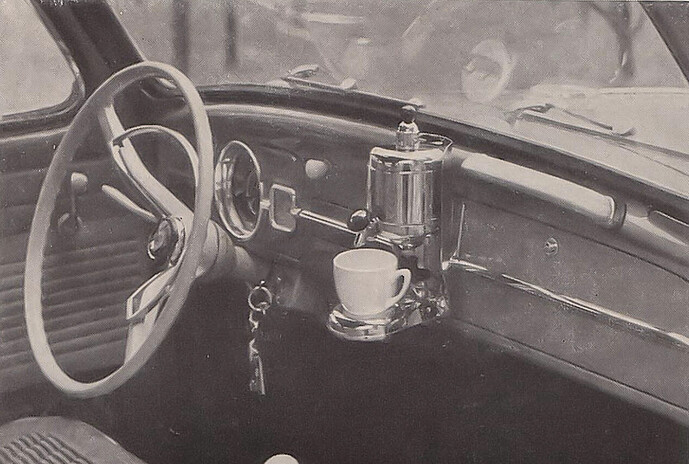 The Hertella Coffee Machine Mounted on a Volkswagen Dashboard (1959): The...

Current auto-industry wisdom holds that no car without cup holders will sell in America. Though this also seems to have become increasingly true across the rest of the world, I like to imagine there still exists a country or two whose driving public...

I found the complaints about how it brews coffee weak. Brews like tea? What’s wrong with that? That’s how a French press works, and coffee made in a French press is great.

Mine was made into a coffee machine or washing machine about 1968. Around October if I remember correctly.

From the stories Dad’s told us about his bug in the winter any heat would have been welcomed, the doors would freeze shut again on his drive to work so had to climb out the open window when he arrived. Replaced with a Mazda RX2 sometime around 1972.

in the winter any heat would have been welcomed

I owned a Karmann Ghia many years ago, and I installed a heater blower in the duct leading to the passenger compartment on the driver’s side. IIRC, the blower was from a '55 Chevy. This job involved a lot of hacksaw work and fabrication, but it really improved the heat flow on that side of the car.

Unfortunately, I would have had to install another blower in the duct leading to the other side of the car, and I believed that the electrical system couldn’t have taken the strain of running two blowers simultaneously. But, my experiment proved that the company could have done a lot more to improve the comfort of the folks who bought their cars.

Agreed. That was probably really good coffee just before it spilled from the cups and caused 3rd degree burns to the driver’s lap.

That was probably really good coffee just before it spilled from the cups and caused 3rd degree burns to the driver’s lap.

Aside from the shooting incident, Mrs. Lincoln, how was the play?

50 years of owning them and fixing them brings lots of good adventures and misadventures to mind.
I’m sure glad I don’t have to drive one now, it would kill me.