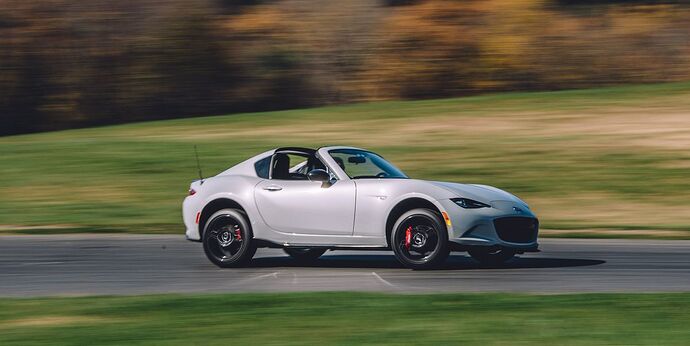 Now, the Luddite faction can chime in and tell us that “this is just one more thing that can break”, and that they would only buy cars without any “gadgets” or “gismos”.

Wait until the Luddite bunch finds out that the MX-5 also can be had with an automatic transmission .

Wait until the Luddite bunch finds out that the MX-5 also can be had with an automatic transmission .

Story is for r&t members only.

I am not an R&T member and I can read it.

First click said for members only , second time it was readable .

Yes. But I am already familiar with the system in theory. Haven’t driven one though.

• Kinematic Posture Control (KPC) is a function that stabilizes the vehicle’s turning posture by combining the rear suspension structure, which has the characteristic of pulling the vehicle down during braking, with the brake control.

• Braking control is performed to stabilize the turning posture in situations where high G is generated on the vehicle, such as during turning at high speed, tight cornering, or driving on rough road surfaces.

• In situations where high G is generated, force which pulls the vehicle down (anti-lift force) is generated by applying slight braking to the inner rear wheels. Anti-lift force suppresses changes in pitch and roll direction posture and stabilizes the turning posture.

• The larger the difference in speed between the left and right rear wheels, the greater the generated braking force. However, the amount of rear braking is extremely small, therefore the change in yaw moment amount is slight. This achieves a natural feeling of steerability.

First click said for members only , second time it was readable .

Worked that way for me also.

The concept of geometric brake anti-lift is a bit deep into suspension design theory. It can be hard for laymen to grasp.

We’ve had questions here about the effect… pulling the handbrake and the rear end squats… That’s an example of how the brake torque and the geometry works.

Applying one brake pulls the body down reducing roll angle and applying the brake 10%, tends to turn the car into the corner. All good things.

Applying one brake pulls the body down reducing roll angle and applying the brake 10%, tends to turn the car into the corner. All good things.

Yes and Mazda will be introducing this on cars other than the Miata. The system also modifies the way it acts when it’s raining, as does the entire ABS system.

One issue I see with things like this is that the driver no longer understands or learns how to handle a car. When I was a high school kid, our driver’s ed course taught us about skids and how to recover from one. My teen son has nearly completed his training and has no idea what to do if the rear end breaks loose or if a tire blows.

And I know for darn sure they don’t show the movie “Red Ashpalt” any more!

Yeah, I can only read the first few paragraphs and the rest is blurred out below a box asking me to subscribe. Nothing seems to make it go away.

One thing I have noticed about these kind of improvements is the cliff warning. Without them, there is some indication that the car is approaching limits, not always but most of the time if you’re paying attention. But when the limits are extended by technology improvements like this, the cliff is somewhat obscured and more suddenly gone over/past without warning when you exceed the ability to compensate. Everything is good until it isn’t and by then, it might be more “impactful” if you know what I mean

Who cares? You don’t buy a Miata because it has low long-term maintenance costs.

One issue I see with things like this is that the driver no longer understands or learns how to handle a car.

Agree completely. Stability control, ABS, lane keeping, auto-braking all eliminate the ability to learn car control withOUT the nannies to save you. You create a whole class of drivers that can no longer operate their vehicles without these features. Saves lives but… dumb-down driver’s abilities… Double edge sword.

Quite a LOT. But that’s not the greatest concern…you can boil brake fluid or fade brake pads driving in a “spirited” fashion on those twisty mountain roads. At that point, no amount of technology will save you. It becomes up to the driver to solve.

That example speaks to this…

When I do track days in my Mustang; stability and traction control is OFF. Only ABS remains. I’d boil the brake fluid if I didn’t turn stability control off. Traction is just way too abrupt for on-track and I can’t leave it on without the stability control.

I can see how being able to selectively apply individual brakes and controlling it with a micro processor would help. Don’t some cars do that with traction control now.

I know I could confuse the primitive traction control on hilly, icy, back country roads in my 98 Olds Intrigue so badly that the system would not stop buzzing and beeping until 20 minutes after I stopped and shut it off.

By the way, perhaps us Luddites should be required to put a capital L after our screen name so we can be identified.

Anybody else remember this aftermarket item from days of yore? Early 70’s somebody tried to sell me one. A long rectangular metal beam-shaped gadget you supposedly bolted to the trunk floor, said to contain ball bearings which would move around to counter body roll.