Honda trys to start but wont w/out starter fluid

I bought a 95 honda civic manual, with a recently swapped engine (D16z6) in it. Runs great… once I get it to start. Sometimes, not always, it turns over but wont crank, once I spray starter fluid , she cranks right up. Drives great no other issues. Fuel pump, lines, filters and starter have already been replaced. Advise? Any ideas?

Crank is when the starter turns the engine… turns over means the same.

I’d also put a timing light on it when cranking and running to make sure spark happens for both.

Impossible to guess further since so many things could be screwed up when the engine was swapped.

I’m more or less looking for someone to bounce ideas off of. I have a couple but just unsure. Never encountered this problem before. I understand there are numerous things it could be.

Check for fuel spark and compression…

Start working on the one you don’t have or have enough of.

You can’t assume the person who installed the engine did a good or only half-good job nor how many wires were damaged and grounds are forgotten, corroded or broken. But YOU are our eyes, ears and hands…if you don’t have the tools or knowledge to check things we suggest, we can’t help you solve your issues.

If it starts and runs with starter fluid you have a fuel delivery issue. Have you tried the old leave the key in on position and listen for fuel pump. Leave it in the on position for 10 seconds before trying to start.

I think that vintage had a problem with fuel relay under the dash. Especially when the weather is warm out. It is what turns the fuel pump on. It would help to check for fuel pressure but if it starts when you spray fluid in, pretty safe that it is a fuel problem. I took a guess years ago and that was the problem. $80 back then and the dealer said they weren’t having problems with them but they were. This was on a 96 Acura something or other small car.

Let me give credit. It was on sons car and he was stalled. @tester had mentioned the problem here before that so took a chance and that was it.

I bought a 95 honda civic manual

Turn the ignition switch on, and push start the car by popping the clutch in first gear.

If the engine starts, it points to a problem with the ignition module. 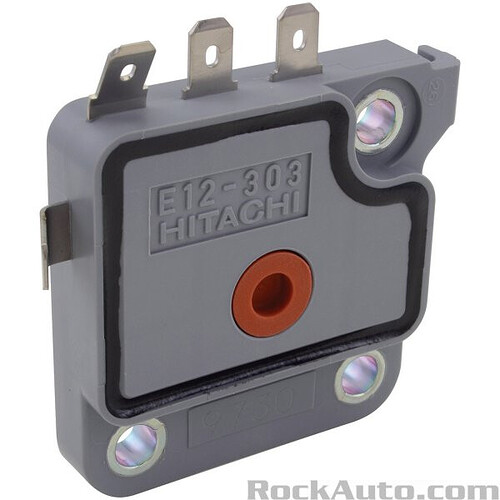 It occured to me last night that that maybe the coolant and or air temperature sensors are not wired or broken. If the ECU doesn’t recognize it is cold, it won’t supply enough fuel but once it is running, the O2 sensor can recognize a lean fuel condition and compensate.

Since the engine was changed and presumably the ECU, is this OBD2? Or OBD1? Does the check engine light work? Is it on? Do you have a code reader, or better a scanner for whatever system it has?

Another potential cause is a faulty ignition switch which has been a problem for decades. The starter fluid could well be a coincidence.

Next time there is a no-start test for power at the ignition coil in both the RUN and START positions of the key switch. Black/yellow tracer wire if my memory is correct.

If it does this even w/engine warm, like you’ve just been in the grocery store for 45 minutes, cranks ok, hear that rrr rrr rrrr sound, but won’t catch and run, my guess is fuel rail is losing pressure. Ask shop do fuel rail pressure hold test. If pressure not holding, likely suspects are (when engine off) fuel pump check valve leaks fuel back into tank, or fuel injector is leaking gas into the engine. If engine uses fuel pressure regulator, check its vacuum line attachment. Should be no gasoline in that line.

So I replaced Map sensor after doing some research and consulting a couple people and she seems to be starting so either coincidence or hasnt sat long enough to test the theory. Now im unsure if my engine light even works but it is an OBD1. I have a mechanic looking at the car Thurseday b/c after the car starts it seems to idle high for a minute and occationally when driving she seems to slightly bog down but still trying to see if i can figure this out before then. Also have an SRS light and brake lights dont work. I replaced bulbs and brake switch. Not sure if its a wiring problem or the fuse but i am unsure of where the fuse is for the break lights. Havent been able to find the right diagram online and no maual for this car.

Turn the key to ON, but don’t start it. If you SEE a check engine light, good! If not, you have no way of knowing you have a problem without an OBD1 code reader to plug in.

Also have an SRS light

Which means your airbags will not work in an accident.

A likely problem being a bad or disconnected ground. Check that first.

no maual for this car

Turn the key to ON, but don’t start it. If you SEE a check engine light, good! If not, you have no way of knowing you have a problem without an OBD1 code reader to plug in.

Now please don’t take this the wrong way, but I figured out I need an OBD1 Code reader by myself, so if I figured that out dont think the instruction for seeing a check engine light was really helpful lol. (I know you can tell obviously I’m a female so maybe this is why youve said this) when i said not sure if engine light works just ment it isnt on so unsure if it even works. I do appriciate the ideas and what not, but I do have some knowledge of mechanics, just don’t always know how to put everything into words.

A likely problem being a bad or disconnected ground. Check that first.

This has been my exact thought. I have just been dreading it due to the ghetto rig the previouse owner has done. That is why I’m hoping it is just a fuse but im about 90% sure it has to do with their wiring mess.

Im debating on just redoing the wiring, if that tells you how crappy of a job they did.

I had no clue you were a female. It is often difficult to determine just how much a poster might understand or not understand. Better to give more than less. And you DID post you were unsure it even works…

Ohhh… I hoped you would not have that issue with the wiring! Fixing someone else’s poor wiring can be an absolute nightmare. Solving it is very rewarding, though.

90% sure it has to do with their wiring mess.

Explain wiring mess! But connectors can be so bad.

Did you buy the car in this condition?

Is it possible to somehow return it, and/or get your money back?

Wires everywhere some for lights some for a system i guess that someone use to have (which dont take me the wrong way nice to know it is set up for something in the future ) but they are just hangin. Gotta becareful shutting the truck or “oh shit a wire shut in the trunk” some have connecters some have electrical tape. Rear side marker bulbs were burnt out and just hangin in the back of trunk still hooked up but just haning in the trunk.

Wires everywhere some for lights some for a system i guess

I knew it it had the idle issue and start issue when i got it. I purchased it for a couple reasons. The engine for one. Also i made the agreement with my fiancé that it may be his transportation but it is my new baby to fix up. It has a lot of potential. I don’t give up on things very easily.

Well im not most people. I have another vehicle that runs just fine with no mechanical issues. So its not like im relying on this civic to be a main car. Its pretty much just to get my fiancé to and from work once i can get it properly running.