In the market for a used SUV and I think we’re going to go w a Honda CRV. I’ve heard bad things about the CVT transmissions so we’re leaning toward a 2014 with the automatic transmission. The guy at the Honda dealership says the CVTs are fine though, much better, lighter, better gas mileage, etc. Obviously he’s biased and never going to say they are bad, but are they as bad as I read about? We are going from a 08 Caravan so a Honda automatic or CVT is going to be a huge step up either way, but is it better go get a 2014 automatic or a 2015 or 2016 CVT? Planning on keeping the car till it dies (as opposed to turning it in after a few years.)

If you shopped for the Nissan, I would suggest you to run from CVT equipped ones as they are failing very often… but Honda’s take on CVT seem to be much more robust, although Honda quality overall declined a lot.

Maintain the transmission as per the severe service schedule

No matter what anybody else says

No matter if you feel you’re servicing it too early

If you do that, your odds improve that the transmission truly will live to a ripe old age

In fact . . . you should service the transmission as soon as you get the car, unless you have written receipts proving it was done yesterday

I have a 2017 Accord with a CVT. It works well and I don’t encounter the typical CVT drivability problems I’ve heard about. It only has 38,000 miles on it, and I plan to change the transmission fluid at the next oil change.

The CRV you mentioned in your other post had the transmission fluid changed twice in 77,000 miles. That’s two times more than trans fluids are changed In most cars. I wouldn’t worry about a well maintained Honda CVT, and that CRV you posted about is a good alternative too.

One thing bad about Honda transmissions: the 9-speed conventional transmission used in 6-cyl Honda’s for a while is problematic. The Honda dealer steered my daughter’s family to a 2020 Pilot instead of a 2019 because they switched to the 10-speed in the 2020. If the dealer is steering people away from the 9-speed, you can be sure it’s bad news. You won’t run into a 6-cyl in the CRVs you are looking at. I just mention it to show that CVTs aren’t the only modern transmissions with problems.

Maintenance is required a lot more often on CVT’s if you want any of them to last . Most conventional transmissions running todays synthetic fluids can safely go 100K before their first service so I would figure that into your cost analysis too .

My mom’s Civic has a cvt

I service the fluid as per the severe service schedule . . . which happens to be every 25k on this vehicle

I might be wrong, but I’m doing everything I can to improve the odds

The 10 speed transmission has been in use in other applications for longer. Our 2019 Odyssey has the 10:speed, for instance. The dealer had both 2019 and 2020 new Pilots on the lot. It seems to me they would have preferred to sell the older MY 2019 to purge inventory if they only had short term self interest in mind. Also, my son in law bought a 2016 Accord in 2017 from the same dealership. I believe they mentioned our Hondas as well. I have a 2017 Accord and my wife a 2019 Odyssey, Both bought at the same dealer. IMO, they saw the family tie and decided trying to make two life long customers was more important to them than the short term goal of purging the old MY. Yes, they have self interests, just not the one you think they have.

People ignore it until there’s a problem and then blame the CVT/dealer/car manufacturer.

Much like the guy on this forum a long time ago whose automatic transmission failed at 160k miles on his Volvo and who was irate that Volvo would not warranty this transmission; a transmission which admittedly had never had the fluid changed in it.

@ok4450, while I agree to this statement in general, I think it is also brand-dependent.

My own experience with Nissan CVT was that even when owning 2012 Altima from the new and with 30K fluid replacement regimen, transmission started to slip and shudder after 90K miles, then my wife’s [new] 2013 Sentra CVT failed hard at 40K miles. I can not speak to how bad it was on my daughter’s 2007 Altima, as we owned it from 68K miles it had on odometer, yet even with regular fluid replacement it developed pre-failure symptoms by 98K miles (engine stall when braking hard, shudder).
I would guess our family had some extreme bad luck with a sample of 3 Nissan CVTs out of 3 we owned showing it will not last long.

Much like the guy on this forum a long time ago whose automatic transmission failed at 160k miles on his Volvo and who was irate that Volvo would not warranty this transmission; a transmission which admittedly had never had the fluid changed in it.

+1
I think that we have had a fairly large number of posts over the years from people who seem to think that the printed terms of their warranties are meaningless, and that any problem they encounter with their vehicle should be covered by a warranty that expired long ago.

IIRC, we even had a post a few years ago from a woman who was outraged that collision damage to her car was not covered by warranty.

Very true VDCdriver. When I worked for Nissan a woman came in one day with her 3 week old brand new Nissan on the tow truck. She wanted to know if she had to sign any papers for warranty purposes. The car slid on the ice into a 10 foot deep ditch only a 1/4 mile from the dealer; wiping out hood, fender, valance, the right front suspension, tire, wheel, etc. The service manager told her this was an insurance issue; not a warranty problem.

She was ticked clean off and called corporate Nissan to complain about the dealer refusing to warranty a “small front end problem”. Nissan called and the service manager filled in the blanks. Corporate Nissan told her politely she was out of luck on any warranty claim. She left still ticked off…

No idea why thegreendrag0n had so many issues with CVTs. Surprisingly, for a comparatively low population area Nissans sell like hotcakes here and the dealer’s operation has expanded by a factor of 10 over the past 15 years. They don’t seem to have much of an issue with them as the service dept. and service lot is really not that busy.

Would you like to make a bet on how well those folks maintained their car after finding out that they would have to pay for it, rather than the manufacturer?

No idea why thegreendrag0n had so many issues with CVTs.

I don’t know if your comment was supposed to be sort of sarcastic . . .

I have read that, as far as CVTs and reliability goes, Nissans aren’t very good

Not surprisingly, when a “new” technology comes onto the market, not every auto manufacturer is able to quickly perfect it

Well, I knew Nissans are not stellar on quality, but I thought that some DIY repair here and there will do, given the major systems will last with a careful maintenance.

As for Nissan’s CVTs tend to fail as vehicle gets closer to 100K or so, a great point came from the mechanic posting on YouTube under “Pine Hollow Auto Diagnostics”.
He had his wife’s Murano CVT failed hard, so while getting the remanned unit, he decided to perform an autopsy and figure out the root cause.
Quite predictably, the belt exploded, but he went further asking question “WHY that belt exploded?”
The answer was in 3 tiny metal balls in the pulley system.
Essentially, as pulley is controlled by the oil pressure, one of the sides have to slide up and down and it predictably had channels in the shaft and in the pulley, which allowed it to slide.
For some weird reason, Nissan had no better idea than to connect these two with 3 tiny metal balls.
The amount of force there is staggering and these balls slowly but surely ate the sides of the channels/slots and also became far from round in the process.
Eventually, the pulley’ sides started to spin with different speed, immediately shredding the belt in pieces.
The failure was predetermined by design.

Two of cars I had were of the same generation 2 of CVT from Nissan, so when they started to exhibit jerks in ratio change and droning, I knew what exactly will happen next.

What happened to my wife’s car with generation-3 CVT I do not know, but I bet some similar ingenious thing, as first 2 years of Gen-3 were also plagued by failures. 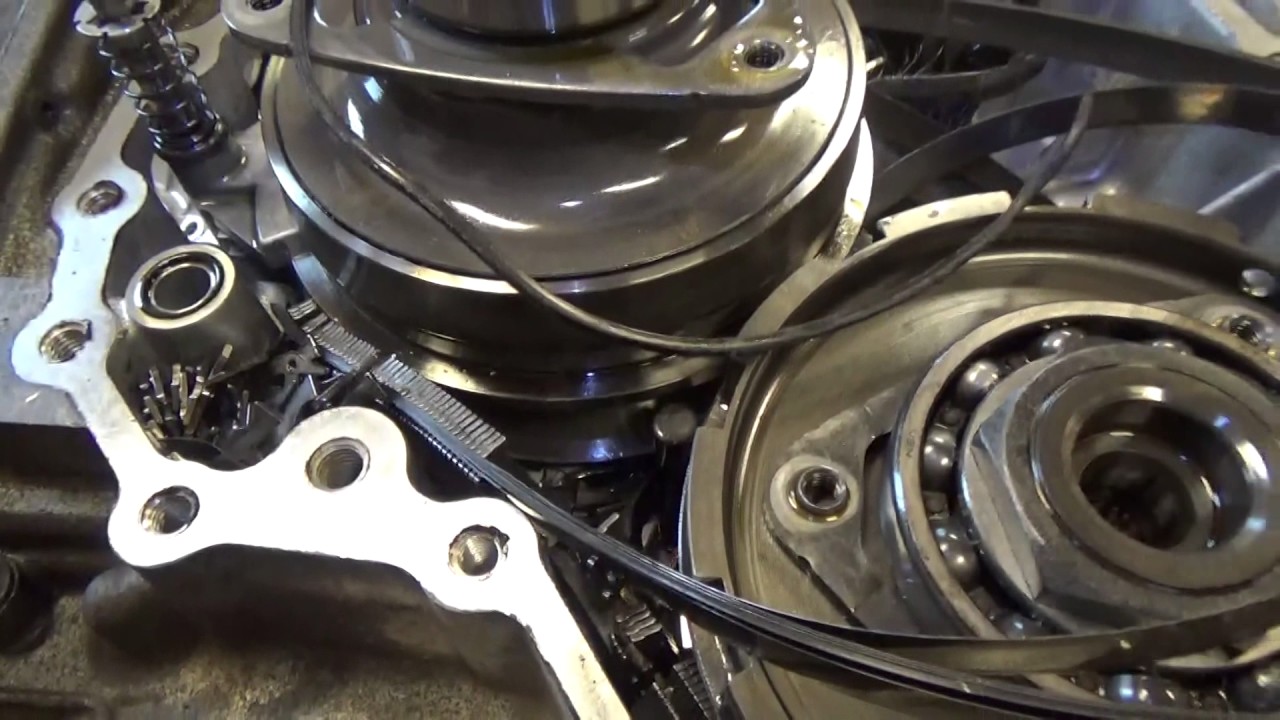 I do know Nissan had problems with CVT’s for a few years. Not sure if that’s the case now. Don’t know if any other manufacturer is having issues. When I bought my 14 Highlander I also looked at the new 14 Pathfinder. One of the major differences was the Pathfinder had a CVT. I have a friend who owns a transmission place in southern NH. Very reputable place. Many dealers outsource their major tranny work to him. I asked him about the CVT. He LOVED Nissan CVT’s. He had 3 in service bays that day in different stages of being rebuilt. And he recommended I stay away from them until they get their kinks out.