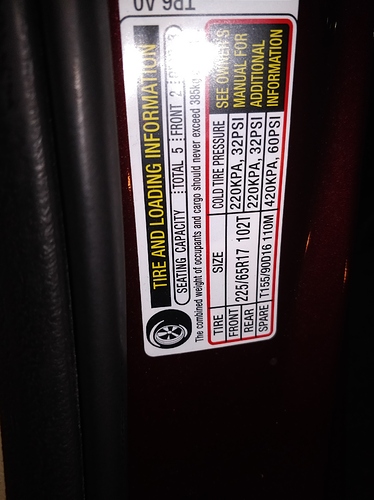 Honda crosstour 2012 V4 two wheel drive requires a 22565r17 with load index of 102t. However I recently brought and installed a Michelin latitude touring standard 22565r17 with load index of 100t.(only installed on the rears) I have my original true contact contintiel tires with index load of 102t in the front only. Would this matter? I had the impression that i would be perfectly fine unless I drive over 118mph and your cross tour is over 7000lbs

The Michelin Latitude 225/65R17 was OEM on my 2013 Equinox. Curb weight is similar to the Crosstour at 3800 lbs. I had no issues with the tires. They were replaced at 57k miles with Michelin Defender LTX tires. I’ll defer to experts on this forum, but I don’t think you will have any problems.

T is the speed rating

So your new Michelins have the same speed rating, but a lower load rating

Since you specifically asked about speed, I believe your question is answered

I’ll defer to experts on this forum, but I don’t think you will have any problems.

Yes, if the OP chooses to operate the car w/o any heavy loads, he should be okay.
In any event, don’t ever sell this car because it is the only Honda Crosstour in existence with a V-4 engine!
That is a really unique and valuable vehicle.

don’t ever sell this car because it is the only Honda Crosstour in existence with a V-4 engine!

Think what it would bring at Barrett - Jackson auction.

Thank u. it is a very unique car. it is a cross between a SUV and sedan with V4 engine that saves alot gas. I love it!

The previous poster was being sarcastic. You don’t have a V4 engine, you have an I4 engine.

Thank u. it is a very unique car

That is if unique means Honda dropped it because it did not sell well.

The heaviest Crosstour weighs 4070 lbs total. I think you are OK.

Now you have a good excuse not to take mom-in-law along on those weekend trips.

lol yea i thought that my car was too good to be true. the crosstour was one of worst selling cars. wondering if honda still makes crosstour.

lol yea it makes feel better. dont rub it in.

Allow me to explain what is going on:

Because of the way tires are rated in different parts of the world, there is a MINOR hiccup when it comes to load carrying capacity - and it mostly deals with whether the tire is rated in metric units or English units.

For practical purposes, the tires are not really different - so long as the size. load type (Standard Load / Extra Load), and speed rating are the same.

Thanks for the breakdown